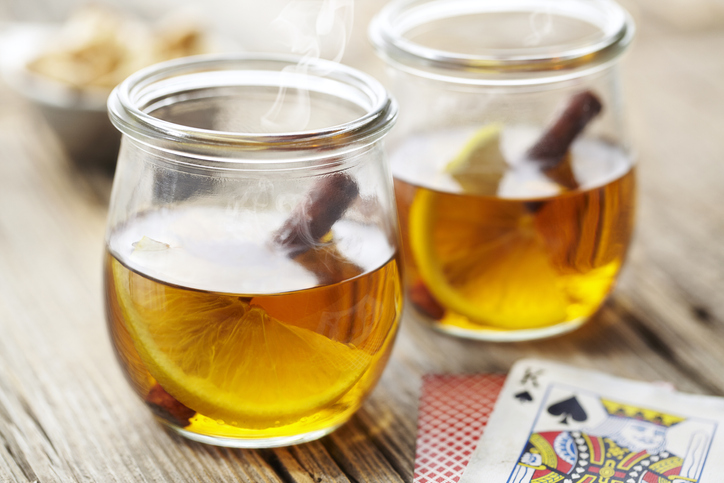 There are many home remedies out there that purport to help you feel better when you’ve got the cold or flu, from eating chicken noodle soup to drinking glasses of OJ.

But perhaps no folk tonic is more enjoyable to partake of than the hot toddy. Traditionally made with whiskey, hot water, lemon, and honey, this warm, comforting cocktail remains firmly entrenched in some people’s psyches as being a miracle cure for sniffles and coughs.

The question is: Does it really work? Might you even use it as a kind of all-natural substitute for something like NyQuil? Or is it just an excuse to enjoy an alcoholic beverage when you aren’t feeling so well? Below I walk you through the answers to those questions.

Is It Okay to Drink Alcohol When You’re Sick?

The big question surrounding whether it’s good to drink a hot toddy when you’re sick is whether or not its alcohol content has a beneficial or detrimental effect on your health.

In high doses, alcohol certainly falls into the latter category.

Multiple servings of alcohol dehydrate you, disrupt your sleep pattern, and suppress your immune system — all effects you certainly don’t want when you’re sick! Alcohol can also exacerbate the symptoms of a cold — increasing your congestion, worsening your head and body aches, etc.

However, in small, single doses — around 1-1.5oz — you can not only avoid these negative effects, but reap a few positive ones:

First, alcohol can dilate your blood vessels, easing inflammation and increasing the blood flow — including beneficial illness-fighting cells — to infected areas. (It should be noted that hot water does the same thing.)

Second, alcohol can relieve pain and (again, in the form of a single drink) help you sleep.

Third, alcohol can help alleviate congestion. If you’ve taken a whiff of a bottle of whiskey, you’ll know how well it clears out your sinuses. Combined with the steam of hot water, it becomes doubly effective.

Fourth, alcohol can help stave off bacterial infections with its natural antibacterial properties. Most colds are viral in nature, but can cause secondary infections of the bacterial variety.

So bottom line is that alcohol has a beneficial rather than detrimental effect on your body when you’ve got the cold or flu, as long as you keep the dosage small.

Why a Hot Toddy Is Good for What Ails Ya

That a small amount of alcohol is comforting when you’re sick is why NyQuil is made with 10% of the stuff. (Though the official line from the company is that the alcohol is there simply to act as a solvent for the other ingredients. Sure.)

But rather than drinking a concoction made with chemical thickeners, multiple artificial colors, and high fructose corn syrup, or, for that matter, just taking a shot of, say, plain old vodka, the hot toddy is arguably the best alcoholic drink to reach for when you’re sick. Why?

First, the lemon in the cocktail provides a vitamin C boost, which, while it doesn’t prevent colds, can help lessen the duration of their symptoms. Second, honey has been used for centuries to soothe coughs and scratchy throats. It may also help you fight off a virus; while it’s often said that sugar generally lowers the immune system, when you actually have an infection, glucose can help you fight it off. Both lemon and honey also have antibacterial properties.

Plus, a hot toddy is served, well, hot, and its warmth and steam can help with your congestion and just feel generally soothing. There’s no real “cure” for a cold, and whether you’re drinking a hot toddy or taking a dose of NyQuil, you’re just looking to mask the symptoms, so you can be more comfortable and get some restorative sleep. A hot toddy has both the taste and the temperature to put you at ease.

Is It Okay to Take Other Cold Medicines With a Hot Toddy (or Other Kinds of Alcohol)?

Nyquil, of course, isn’t just alcohol — it also contains an antihistamine, a pain reliever (acetaminophen/Tylenol), and a cough suppressant. So if you’re feeling really under the weather, you can’t just sub its medicine for a cocktail.

Instead, to get the same effects as NyQuil, you’d need to take a separate pain reliever, antihistamine, and/or cough suppressant with your hot toddy. But mixing cold medicines with alcohol is something you need to do with care.

In general, if you’re a reasonable person who’s taking a couple Tylenols with a single hot toddy (or other drink), you’re not going to run into any issues.

That said, you always hear about the dangers of mixing alcohol and medications, so we talked to Doctor Mike A. to get the real scoop on the risks of drinking and taking other cold medicines at the same time.

When it comes to mixing alcohol and pain relievers, Dr. Mike agrees that, as just mentioned, having a couple pills of Tylenol with a single drink won’t be a problem for most people. What is a problem is overdosing on either (or both). Doctor Mike did also note that Tylenol (which is processed through the liver) isn’t recommended for anyone with any sort of liver problem, so in that scenario, mixing it with alcohol (also processed through the liver) can exacerbate some pre-existing health problems. When it comes to pain relief, then, the doc recommends taking Advil instead of Tylenol, which is processed through the kidneys rather than the liver, making it safer for consumption with alcohol.

If you’re in need of cough relief, the doc says you’ll be alright taking something like Mucinex DM with your (single) hot toddy.

What if you’ve got a runny nose and need an antihistamine (which also makes you sleepy)? Dr. Mike says that if you limit coupling something like Benadryl with just a single alcoholic drink, you should be fine, though he’s not a fan of the combo, because it can be particularly sedating, especially if you don’t weigh a lot.

If you need all the active ingredients in NyQuil (pain relief/cough suppressant/antihistamine), you shouldn’t have any more of a problem taking all 3 with your hot toddy (if you keep the whisky content low), than you would taking NyQuil, which is, let’s remember, 10% alcohol. You’re probably even okay taking your single hot toddy with a dose of NyQuil itself; its official warnings just say to avoid taking their medicine if you’re drinking 3 alcoholic drinks every day, presumably because that level of intake puts you at risk of liver damage. But depending on how strong your hot toddy is, the cocktail + NyQuil may be too much alcohol (remember that alcohol starts to have a detrimental effect on your cold symptoms past a certain point), isn’t recommended for those with liver issues, and can be too sedative, for which reason Dr. Mike doesn’t think it’s a great idea. If you want to get all the active ingredients of NyQuil, without an extra dose of alcohol, take the liquid capsule version (which doesn’t contain alcohol) with your hot toddy, while again, heeding the acetaminophen+alcohol caveats above.

In general, be conservative and sensible when mixing cold medicines with your hot toddy, and if you have any special health issues, you should of course talk to your doctor before mixing any kind of medicine with any amount of alcohol.

How to Make a Comforting Hot Toddy

There are many variations of the hot toddy, but as a “medicinal” drink for when you’re sick, you’ll probably want to stick with the classic recipe, or try a version that boosts its salutary properties with the addition of herbal tea.

Put the honey, lemon, and whiskey in a mug of your choice. Pour in boiling water (I tend to just use as much as the mug will hold) and give it a good stir with a spoon to dissolve the honey. While a traditional hot toddy is garnished with a cinnamon stick, if you’re making one when you’re sick, you can certainly skip this step.

Boost both the flavor profile and the comforting and healthifying effects of your hot toddy by throwing a tea bag into your mug. Avoid green and black teas when you’re sick, as the caffeine content of those could offset the cocktail’s benefit as a sleep aid (plus, their strong flavors don’t always combine well with other strong alcohol flavors).

Instead go with an herbal tea. Peppermint is refreshing, ginger can soothe an upset stomach, chamomile can help you relax, and rosehips and/or hibiscus will give your cocktail at extra dose of vitamin C. Or just choose a flavor of tea you enjoy.

Preparation of a herbal tea-infused hot toddy is no different; just put in a tea bag once you add the hot water, steep it for a few minutes, and call it good.