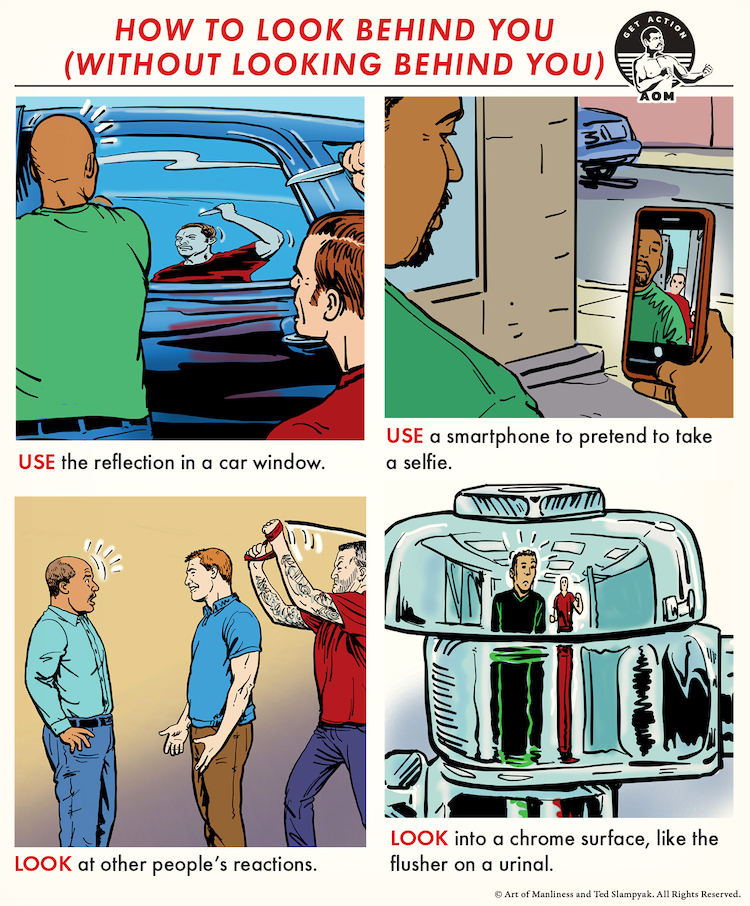 Editor’s note: The text and illustrations of this piece were adapted from Krav Maga: Fundamental Strategies by David Kahn.

When facing street violence, you can usually identify verbal, behavioral, and physical manifestations indicating that violence is imminent. Recognize it or not — and it is decidedly important that you do — it is highly likely there will be some indicator prior to an attack. This all-important situational awareness capability allows you to avoid a “-5” situation — where you’re caught flat-footed and a step behind an opponent.

Situational awareness involves paying attention to your surroundings. Look for anomalies in the environment; observe people’s verbal and especially nonverbal behaviors. When you are observing, don’t use a single-point focus; instead, you generally want to keep your head on a subtle swivel to maintain a 360-degree awareness of what’s around you.

But let’s say you feel like someone is behind you — watching you, following you, preparing to attack or accost you. You may want to assess the threat without alerting the possible aggressor that you are aware of his intentions, as this will provide an advantage in allowing you to get the jump on your would-be assailant.

There are various ways to detect a rear threat without turning around and tipping the person off that you’ve spotted them. Looking at the reflection the stalker makes in chrome, windows, mirrors, or sunglasses can allow you to look behind you, without actually looking behind you. Paying attention to the reaction of an observer who is oriented or facing in a different direction than you might also help you recognize a threat that you can’t see. A rear threat can be detected by using your mobile device to take a selfie as well. To make it less obvious, you could act as if you are “Facetiming” someone, even going to the extreme of having a fictitious conversation as you prepare an escape or counter-ambush.

By using these methods to metaphorically put eyes in the back of your head, and thus recognizing impending violence when it is still in the aggressor’s strategy stage rather than his committed stage, you can seize the initiative in deciding to escape, set up a counter-ambush, or, possibly, preempt the attack.

David Kahn serves as the Israeli Krav Maga Association’s U.S. Chief Instructor, teaches federal, state, and local law enforcement agencies along with all branches of the U.S. military, and is the author of Krav Maga: Fundamental Strategies.