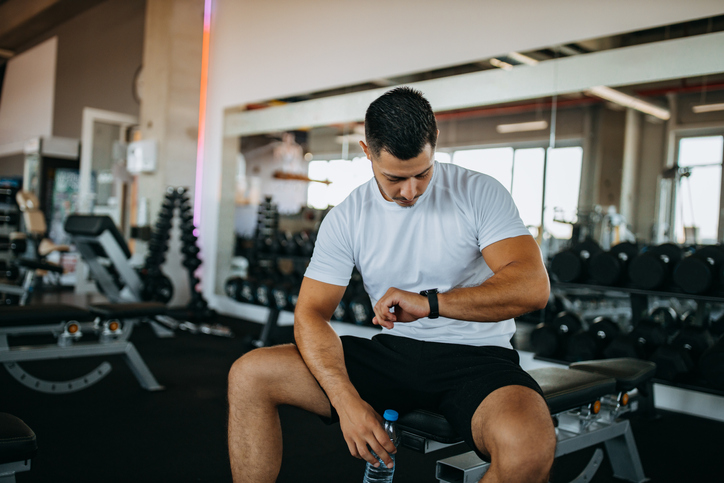 If you’re serious about your strength training, you likely want to get the most out of your time in the gym. But if you’re like most regular joes, you don’t have hours upon hours to dedicate to working out.

If you’ve got three to four lifts you need to perform in a workout, and you’re doing those lifts for multiple sets, how long you rest between sets will determine whether you’re able to get all of your work done in your allotted gym time.

But you face a problem when it comes to taking those rests:

Rest too much between sets, and you needlessly extend your workout time.

Rest too little between sets, and you risk diminishing your performance due to fatigue.

So how long do you actually need to rest between sets so that 1) you recover enough to perform the next set, and 2) you don’t spend more time in the gym than you need to?

It depends on your fitness goals. Read on and we’ll break it down for you.

If Your Goal Is to Get Stronger: Rest ~2 Minutes

If your primary goal is to get stronger and put on muscle, you’ll want to rest long enough between sets that you’re consistently able to complete all the reps in your subsequent sets.

You could ensure that you get enough rest between sets by resting 10 minutes between them. But if you’re doing three of the major lifts (e.g., squat, bench, and deadlift) for three sets of five, that means you’d be resting for 90 minutes during your session. That’s 90 minutes of doing absolutely nothing. Ain’t nobody got time for that!

So what’s the least amount of time you can rest between sets that will still allow you to recover enough to perform your next sets?

This is actually a well-researched topic in the world of sports science.

And the consensus is about two minutes.

It all comes down to how quickly your muscles can regenerate ATP. If you remember from your high school biology class, ATP is what powers your body. Your body makes ATP in three ways; the primary way it does so while you’re lifting weights, is by recycling previously used ATP using creatine phosphate.

When you’re lifting heavy weights, for the first few reps of a set, your muscles are primarily using ATP formed from creatine phosphate you’ve already had stored in your muscles. But this power source rapidly depletes after just 10 seconds or so of an intense activity like lifting weights or sprinting.

If you feel really snappy and strong when you start a set of squats but then feel like you can barely complete the last rep, you’re experiencing creatine phosphate depletion. Your muscles are running out of creatine phosphate to power ATP production, so lifting gets harder. Studies show that when you lift until failure, your body has about 15% to 30% of the creatine phosphate levels it possesses when fully rested.

From there, creatine phosphate goes up incrementally; to get as close to your 100% as possible, you’d likely need to rest five minutes or more.

So the question becomes: Is resting more than two minutes to get closer to 100% creatine phosphate restoration worth it?

The research suggests that the answer is typically no.

Even lifters who rest for five minutes or more don’t have significantly greater strength and muscle mass compared to those who rest for just two minutes, and most lifters will be able to complete all the reps and sets they need to do in a given workout with their creatine phosphate levels at 95%. Resting longer than the two minutes it takes to reach that level, in order to achieve 100%, has a diminishing ROI, in that you’re not getting much of an extra power boost, but are spending significantly more time in the gym.

Experiment and find the proper resting time for you. Start with two minutes. If you can complete your subsequent sets on that rest time, you’ve discovered that you just need to rest two minutes between sets. If you fail the next set after resting for only two minutes, extend your rest between sets to three minutes and see what happens.

The goal is to find a rest interval that allows you to rest the least amount of time while recovering the most you can. Finding this sweet spot will ensure you get the most out of your limited workout time.

If Your Goal Is to Improve Metabolic Conditioning: Shorten Your Rest Between Sets

Do More Work in Less Time With Supersets

If you’d like to get more work done in less time, consider doing supersets.

Supersets are when you perform two different exercises one right after another. When doing supersets, you want to combine exercises so that they work different muscles. This allows one group of muscles to recover while you’re working the other.

For example, you could create a superset with the bench press and bent-over rows.

You could also do a superset of squats and shoulder presses.

Or bicep curls and tricep extensions.

With a superset, you perform the exercises back to back and then rest between the supersets. You may be able to rest less than two minutes here, as the muscle group you first worked, and are about to work again, already got some “rest” while you did the second exercise in the superset. Again, experiment to find your sweet spot, remembering that that sweet spot is the minimum amount of rest that allows you to still complete all your sets/reps.

By switching back and forth between exercises like that and resting between sets, it allows you to cram more work in your workout while giving your muscles adequate time to recover. The research backs this up. Supersetting allows you to get more done without negatively affecting your strength.

The only thing that will hold you back with supersets is your anaerobic conditioning. Doing sets of exercises back to back will get you all sweaty and out of breath. You might find that your muscles are able to do the work, but you’re just too winded to get a superset done. Thankfully, after consistently working out for a while, your conditioning will improve and getting all out of breath won’t be a problem anymore.

Can You Do Cardio Between Weightlifting Sets?

Some people like to kill two birds with one stone and get their cardio done while “resting” between lifting sets.

Will that get in the way of your strength?

As long as you do cardio that works different muscles from the muscles you’re working with your lifts you should be fine. So if you’re doing shoulder presses, you can jump on the stationary bike in between sets. If you’re squatting, you can do some battle rope exercises.

You also want to avoid going too hard with your cardio. You don’t want to be sucking wind before you start your next set on your lift. That will just get in the way of you performing all of your weightlifting reps.

So feel free to do cardio between sets, just do cardio that works different muscles than your lifts and keep it light.

What Else Can You Do While Resting Between Sets?

If you don’t want to do cardio in between your sets, what should you do instead?

You’ll usually find me reading a book between sets. It’s how I find possibilities in spare moments. I have to do a lot of reading for my work, so getting some in while I’m resting allows me to maximize my time.

When I don’t feel like reading, I just walk around outside my garage. It’s relaxing and allows me to get some sun. If Gus is down in the garage with me, we’ll toss the football around between sets.

You can always just stand in the middle of the gym and blankly stare forward like a weirdo during your rest periods. It’s a dominance move.

Whatever you do, just make sure you’re taking it easy during your rests, so your body can replenish its creatine phosphate stores, so you can power through all of the work you have planned during your workout.

During my warm-up, the weight is light enough that I don’t need to rest that long.

During my working sets, I rest three minutes between sets. That seems to be the sweet spot for me. After three minutes, I feel recovered enough to complete the next set.

After I complete a set, I just tell Siri to set a timer for three minutes. Having a timer helps keep my workout on track.

If I’m short on time, I’ll do the warm-up sets for the next lift during my rest time for the lift I’m working on. For example, if I’m doing the worksets for my bench press, during my rests for the bench, I’ll do the warm-up sets for my deadlift. This, of course, requires that you have enough barbells available so that you can have a barbell loaded for two lifts at the same time. Using more than two barbells at once in a public gym can be a gym etiquette faux pas. Use your discretion.

After I finish my main lifts, I’ll do some accessory work where I do things like bicep curls, tricep extensions, lat pulldowns, kettlebell swings, etc.

I turn my accessory work into a metabolic conditioning workout, keeping the weight light and resting very little between sets.

For example, when I do bicep curls, I’ll crank out a set and rest just a minute before I do the next set.

My goal for accessory work is to get a nice pump and get really sweaty and out of breath. I’m not trying to break bicep curl records.