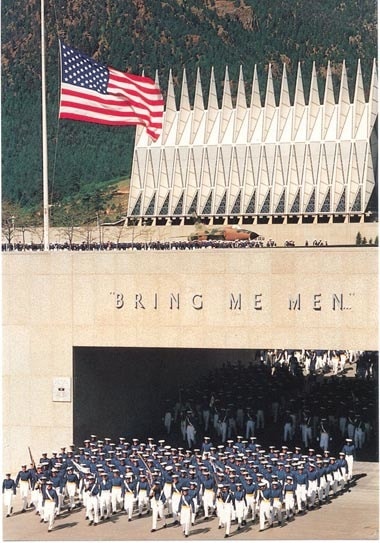 For 39 years, the most famous line from this poem adorned an arch at the base of a ramp where cadets form to march at the USAF Academy. It was removed in 2003.

On the Fourth of July we all love to dilate
With the thought that we are inexpressibly great;
That we’re all legatees of fate’s fairest bequest,
And that destiny’s egg has been laid in our nest;
That we’ve climbed up the sides, up the roof, and sublime
We stand on the top of the ridge-pole of time.
The horizon’s too narrow to limit our stride,
And infinite space is too small for our pride;
Heaven’s vault is too small our hosannas to ring,
And the zenith too low for our gestures to swing;
Our heads are too tall for the low-studded sky,
And we call for “more room!” on the Fourth of July.

‘Tis a day you expect that the orthodox bard
His poetical bunting will flaunt by the yard;
‘Tis a time you expect his tumultuous Muse
To explode at the end of a sky-rocket fuse.
Still I venture to tempt the bold heretic’s curse,
And tremblingly give my unorthodox verse.

For aren’t we too old to be pleased, like the boys,
With glory and gunpowder, thunder and noise?
Too old to sit down in unruffled sedateness,
And muse on our grand and ineffable greatness?
The loud days of our national boyhood are over,
The barefooted freedom of dew and of clover;
And let us throw off, with the boy’s outworn jacket,
The old day of rollic and revel and racket.
Those days are now passed; they will not come again
We are men. Let us grapple the problems of men.

And as men, may we not, on the Fourth of July,
Some specks in our history’s amber descry?
As the politic small boy will creep, on the sly,
To the side of the table that’s nearest the pie,
So we press around — and the crowding is great —
To the luscious pie-side of the table of fate.
But the small boy will learn, as the swift years go by,
There are viands transcendently better than pie.

Let us look at the sum of our work ‘neath the sun.
Have we yet done as much as the old past has done?
We have built our large cities of marble and brick;
But our Shakespeares and Platos are not very thick.
We have urged them to speak with the best of good-will;
But our Miltons are mute and inglorious still.
Our dawn has now passed, and the morning grows late;
But our absentee Angelos linger and wait.
Our hastening noonday encroaches on morn:
But our Darwins and Newtons have yet to be born.

From the dead buried past there are phantoms arise,
With scorn in the cavernous deeps of their eyes;
And they say, “We have searched for him, patient and far,
Through your broad-acred Land of the Evening Star.
We have called for him long; but his voice is still dumb.
Our brother still lingers; our peer does not come.”

But we have had epics of mighty designs
On manuscript ruled with the longitude lines.
On a continent-manuscript, boldly and free,
We have written our epics in railroads; and we
Have worked out our dramas. Each act is an age;
And a land from the sea to the sea is our stage.
We have grappled with nature, and tamed her.
The fen,
The swamp, and the forest, the wolverine’s den,
The home of the bison, the haunt of the bear,
The thronged and the tall-towered cities are there;
And the nest of the serpent, the wild dragon fen,
Resound with the shouts of the children of men.

Now the snake’s hiss is hushed, and the wolf’s howl is dumb,
Has the hour not struck for our poet to come?
Now our cables are laid, and our railroads are wrought,
Build us temples and fanes for the high-priests of thought.
Now our prairies by million-trod pavements are lined,
Build us highways that stretch to the frontiers of mind.

Now our cities are sown by sea, river, and glen,
Let us look for a harvest of epochal men;
Let us look for a Voice from the wilderness sent
To teach us a wise and divine discontent,—
Discontent at mere bulk, tossed by waves and by breeze,
With no pilot soul on the rudderless seas.
Let us look for great bards whose tones, fervent and strong,
Shall burst like the morn through our twilight of song;
Wise prophets, whose sky-lifted eyes are alight
With a gleam that is caught from the future’s far height,
Who see through the fogs o’er the valley outspread
The sunburst of hope on the mountains ahead.
Is it not time to grow, in town, village, and glen,
A strong breed of men who are saviours of men?
Strong pioneer souls who shall blaze out the way
From the frontiers of night to the borders of day?
Shall not this maternal pure soil of the West
Foster sages and seers on its matronly breast?
Shall we not find once more, in these late years again,
The pride of old Homer, wise shepherds of men?
Let us beckon these men, with our favor and praise,
And giants shall grow in the earth in these days.

We are large, and our largeness there’s none to deny;
But Fate calls, and who answers with brave “Here am I”?
Little Athens was small, but her soul still survives
With gifts of its graces in millions of lives;
But Scythia was large, and the long ages tread
On the answerless dust of her myriad dead.
Little Concord — great sons made this small village great;
Great Chicago — ah, well! We will listen and wait.

There is music, I know, that is hopeful and blithe
In the swing of the sickle, the sweep of the scythe;
In the lisp of the foreplane, the smith’s anvil-peal,
In the roar of the mill, and the clash of its wheel;
There’s a music that’s timed to the rhythmical beat
Of the quick-step of Fate in the thunderous street;
There’s a music that’s played by the breeze and the gale
In the creak of the mast and the flap of the sail;
And there’s something that smacks of an epical strain
In the clank of the engine, the sweep of the train.
This music, though mixed with the toilers’ tired moan,
And mingled with heart-break too deep for a groan,
Is wrought out at length in an anthem sublime
That fills without discord the wise ear of Time.

But this is but prelude Fate’s orchestra plays,
To the strains that shall come in the fulness of days;
For the age-lengthened rhythm beat out by the Fates
In the building of cities, the founding of states,
In the earthquakes of war, in its thunder and groans,
In the battles of kings, and the crumbling of thrones,
Is but prelude that’s written by Destiny’s pen
To herald an epoch of masterful men.

In that day we shall worship, by wisdom made whole,
Not greatness of bulk, but perfection of soul;
And the thought-millionaires with our full acclaim then
Will be wreathed and anointed the leaders of men.
And methinks our Great Fate, from the hills to the sea,
Has sent forth this call to the years yet to be: —

Bring me men to match my forests,
Strong to fight the storm and blast,
Branching toward the skyey future,
Rooted in the fertile past.
Bring me men to match my valleys,
Tolerant of sun and snow,
Men within whose fruitful purpose
Time’s consummate blooms shall grow.
Men to tame the tigerish instincts
Of the lair and cave and den,
Cleanse the dragon slime of Nature —
Bring me men!

Bring me men to match my rivers,
Continent cleavers, flowing free,
Drawn by the eternal madness
To be mingled with the sea;
Men of oceanic impulse,
Men whose moral currents sweep
Toward the wide-infolding ocean
Of an undiscovered deep;
Men who feel the strong pulsation
Of the Central Sea, and then
Time their currents to its earth throb —
Bring me men!