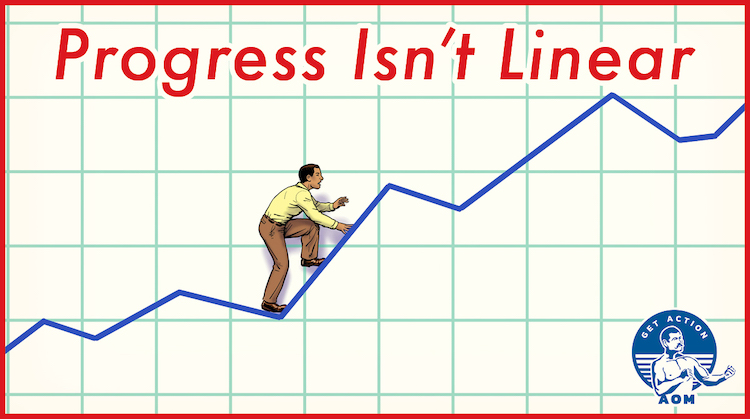 Well, it’s a new year, and that means men all over the world are setting goals to improve themselves over the next twelve months.

If you’re one of these men, here’s a useful mental model to keep in mind as you get cracking on your efforts: progress isn’t linear.

Instead, progress usually looks more like the chart above.

It took me a while to internalize this concept, but once I did, it significantly reduced the amount of frustration and angst I experienced as I worked on various personal goals.

Up until a few years ago, I had this notion that if I set a goal, planned meticulously, and executed it day in and day out, my progress towards that goal would be a straight line up and to the right on the line graph of life.

But inevitably, my abstract notion of how I thought progress would look clashed with the reality of how it did, resulting in much wailing and gnashing of teeth. Or, at a minimum, feeling all dejected and put out for a day or two.

The idea that progress isn’t linear really hit home thanks to the barbell training I’ve done for the past seven years. During the first few months of serious training, I did experience linear progress. With every workout, I was able to add weight to the bar. I loved it! It was so motivating to know going into each workout that I’d be hitting new personal records.

When I first encountered this slowing progress, my coach had to let me in on a secret about weightlifting: as you get stronger and stronger, it takes longer and longer for your body to accumulate the stress it needs to elicit a strength adaptation. It might even take more than a year to hit a new PR.

In addition to my slowing progress caused by the law of diminishing returns, I’ve also faced a series of injuries during my lifting career — I’ve struggled with tendonitis in my biceps, hamstrings, and adductors — that set me back at various times. Those injuries derailed my progress for weeks and sometimes months.

To show how progress with my barbell training hasn’t been linear, let’s look at my deadlift.

In 2016, I pulled 500 lbs. It wasn’t until the end of 2018 that I pulled 605 lbs. That’s two years. That’s a long time before hitting another milestone. Along the way, I had workouts where I couldn’t even budge 405 off the floor and weeks where it just seemed like I had to keep lowering the weight to hit my reps. In short, the path to 600 certainly wasn’t a straight shot.

At the beginning of 2020, I hit another deadlift PR: 615. In other words, after a year of hard work, I added a measly ten pounds to my deadlift.

I’m amid a lull in my barbell training right now. For the past several months, I’ve been battling knee pain and tennis elbow that have made training impossible. I’m focusing on rehab and hopefully on the road to recovery. It’s taken a while, though. I hope to be back to serious training here in a few months. If all goes well, I may even hit a few new PRs in a year or so.

Progress with these injuries hasn’t been linear either. Some days I feel like I’m about to turn a corner with them, but then the very next day, the pain comes roaring back. But if I look at where I was four months ago with these injuries compared to where I am today, I’ve definitely made progress; it’s been up and down, but with a generally upwards trajectory. It’s progress, it’s just not linear.

Making Progress on Being a Mope Hasn’t Been Linear Either

Another area where I’ve seen progress, but not linearly, is my mood. I’m mercurial by nature. I’ve struggled with the black dog for most of my adult life. It’s something I’ve consciously been working on for the better part of 15 years. Overall, I think I’m in a better place now with my mood. Kate would affirm this. My temperamental troughs are less frequent than they were a decade ago, and when they do hit, they’re very brief.

But there’s been a lot of ups and downs along the way to get to this point.

One of my biggest challenges in becoming less mercurial has been learning not to beat myself up too much when I backslide. That usually just makes my slumps worse. Now, I just try to recognize that I’ve had a bad day and tell myself that’s just a normal part of the program in becoming better. And then I get back in the saddle and try again.

Barbell training has helped me a lot in better managing my expectations around my mood and getting a handle on my mercurialness. Not simply in boosting my spirits — exercise is highly effective in preventing and alleviating depression — by also in providing me a very visceral parallel as to the nonlinearity of progress. When I think about the ups and downs I’ve had when it comes to hoisting a barbell, I recognize that there will be similar undulations in building the strength to shoulder the weight of my psyche. Instead of wasting time pouting and beating myself up when I get to feeling downcast, I try to just acknowledge the dip as an inherent part of life’s flow, and work to make such dips shorter and less frequent . . . over a long-term time scale.

So unsolicited bit of advice number one when approaching a goal: don’t expect your progress to be a straight upwards shot. Rather than expecting things to go up, up, up, expect that progress will take the form of a repeating pattern of moving a few steps forward and one, or more, steps back. (Herein is another lesson I’ve learned: a lot of life satisfaction simply hinges on managing your expectations. But that’s a discussion for another time.)

Unsolicited advice numero dos: when you do encounter a plateau or dip in your progress, don’t freak out and dramatically change things right away.

You may need to mix things up, but maybe not immediately and maybe not dramatically.

Just evaluate the situation non-judgmentally. For example, if you gained a pound or two in a week, take a look back at what happened. Don’t get upset or discouraged. If you’ve done a good job in sticking to your macros, maybe there’s something else involved with the weight gain. Maybe you ate a really salty meal the night before you weighed yourself. In that case, you’re going to be retaining more water, so you’ll look puffy and be heavier. Or maybe you slept poorly that week. That can cause a bit of weight gain.

Instead of changing your diet plan right away, give it another week and see what happens. If you’re still gaining weight or you’ve plateaued, try reducing calories a bit and observe the effect of that tweak over the course of a week.

If you’re looking to get a handle on your anger and you have a day where you slip, don’t get down on yourself and immediately think you need to get counseling or start taking some expensive nootropic stack to calm you down. Instead, look at what happened when you lost your temper. Were you under a lot of stress that week? More stress than you usually experience? Have you been doing your meditation or breathing exercises on the regular? When was the last time you lost your cool? If it’s been a while, then consider this recent blow-up an anomaly. Keep doing the things you’ve been doing that have helped you have fewer outbursts.

Whatever the goal is you’re working on in the coming year, I wish you all the best with it. When you encounter inevitable setbacks, remember not to despair. Don’t freak out. Don’t do anything drastic. You don’t have to be moving in the right direction every single day, just the right direction over the course of months, and years.

Focus on the process. Make modest adjustments when needed. And keep on keeping on, brother.