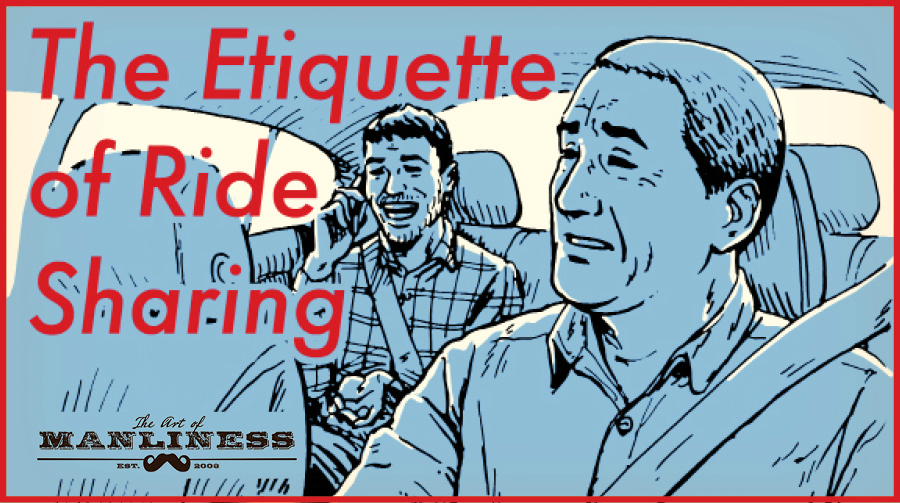 Ride sharing services like Uber and Lyft have nearly made taxis obsolete. While these services are similar to taxis, they of course aren’t exactly alike, so the rules of etiquette are a little different as well. Having good manners is even more pertinent in the world of ride sharing, since (and not all riders know this), not only do you rate the drivers, but the drivers rate you too.

Especially if you’re a first-time or new user, it can be a little tricky to figure out the proper ride sharing protocol. Below we offer etiquette tips to make the most of your (and your driver’s) experience.

The biggest question in regards to ride-sharing etiquette is tipping. How much do you give your driver? Both Uber and Lyft offer in-app tipping, but it can be easy to forget to utilize it; because payment is taken care of digitally and automatically, the ride leaves your mind the second you leave the car. Either make a point to rate (more on that below) and tip your driver ASAP, or keep cash on hand and just do it that way. It should be noted that even when you tip in-app, all that money goes to the driver. Neither Uber or Lyft take any portion of tips from their drivers.

Tip as you would a standard taxi ride, which is 15-20%, with the average being more on the upper end of that. What makes this hard is that the in-app tipping is offered as a dollar amount with some pre-set options. Learn how to figure out what 15-20% is — a skill that will be useful for tipping in other scenarios too, of course — and choose the preset amount that matches your calculation or enter in your own amount when prompted about giving a tip.

It’s that simple. Tip just as you would most other services.

Don’t make your driver wait. At the airport, don’t make your request for a car while you’re still on the plane. If you’re at a restaurant, don’t request a car before your bill is paid. You’re wasting the time of the driver by making them wait, you’re costing yourself money (you get charged a small fee by the minute if you make a driver wait more than two minutes), and it’s just plain discourteous to boot.

The only time to request a car before you’re actually ready is if you can see that it’s 5-10 minutes out. In those instances you can request your pick-up early, but only by a few minutes, and only if you’re absolutely sure you’ll be ready once the car does arrive.

One of the perpetual questions of ride-sharing. It’s not a taxi; it’s someone’s personal vehicle. So are the rules different? Not unless you want them to be. The majority of people just hop in the back, and that’s what your driver will expect as well, especially if you’re riding solo. If for some reason you want to ride in the front you sure can, but it’s a good idea to ask, just for the sake of politeness.

If you’re riding with other people, especially if your party is 3 or more, then it’s definitely alright for someone to take the front seat (and it’s quite possibly preferable for the sake of comfort).

If you do sit in the front, don’t fiddle with anything — stereo, heating/cooling, etc. You’d think this would be obvious, but it’s one of the top complaints of Uber drivers.

Don’t Be a Backseat Driver

With less of a barrier between you and the driver as there is in taxis, you might be tempted to give your opinions on their route. Don’t do that — even if some drivers wouldn’t mind. Unless they seem to be taking a route that’s way off base (not something I or anyone I know has experienced), just sit back and enjoy the ride. The only time you should be a backseat driver is if you might be feeling motion sick or perhaps just uncomfortable about how fast the driver is going. Nothing wrong with asking to slow things down and telling the driver that you’re not in a rush.

Don’t Eat or Drink in the Car, Within Reason

Remember that for the most part these are people’s personal vehicles. Do you want someone noshing on greasy fast food in your backseat or trying to wolf down some Chinese takeout? Generally not. If you have food, wait until you get to your destination. Beyond being messy, food just stinks up the car, and that can create a less-than-stellar experience for the next rider, who might give a lower rating because of it. All thanks to you. Don’t do that if it can be helped at all.

Beverages are obviously more appropriate, especially if they have caps, but still be extra careful, just as you would in anybody else’s car. Just because you’re paying for the ride doesn’t mean you can be a slob.

Make Small Talk, Only If You Want To

A silent ride can feel awkward, and you may feel like you need to chat with the driver to ensure they rate you highly. But while many (though not all) drivers do like to talk, you’re not under any obligation to do so. Drivers usually let riders take the lead in showing they want to chat, so if you’d like to ride in silence, just twiddle on your phone or pop in your earbuds, and don’t feel weird about the quietude.

Even though you’re not obligated to make small talk with your driver, you should still exchange some basic pleasantries when you get in and out of the car: “Hi, how’s it going? I’m headed to X destination. Thanks very much for the ride. Etc.” Treat the driver like a human, not an automaton.

Speak Up If Something Isn’t to Your Liking

If the temperature isn’t right, or music is too loud (or you don’t want music at all), speak up. The drivers generally want to please the customer, and are happy to oblige. They obviously don’t know your preferences though, so you have to mention it if something is making you uncomfortable or bothering you. And if and when they do comply with your ask, you should definitely give that 5-star rating.

Most drivers start you out at a 5-star rating, and then only take off stars if you do something really egregiously rude. While not following the guidelines below won’t necessarily lose you a star, it’s better to avoid the chance that it could, and they’re simple points of courtesy anyway:

Most drivers give riders 5-star reviews, and you should return the favor. It really helps drivers if they get rated well. If you have a good experience, and have no complaints, don’t be stingy with a five-star review. Uber expects drivers to maintain very high ratings, and they can easily lose their gig if their score drops too low (rumors are that at Uber the number is 4.7). Now, if your experience was awful, then don’t be afraid to rate it as such, but in general, if the driver got you from point A to point B safely, that’s a 5-star ride.