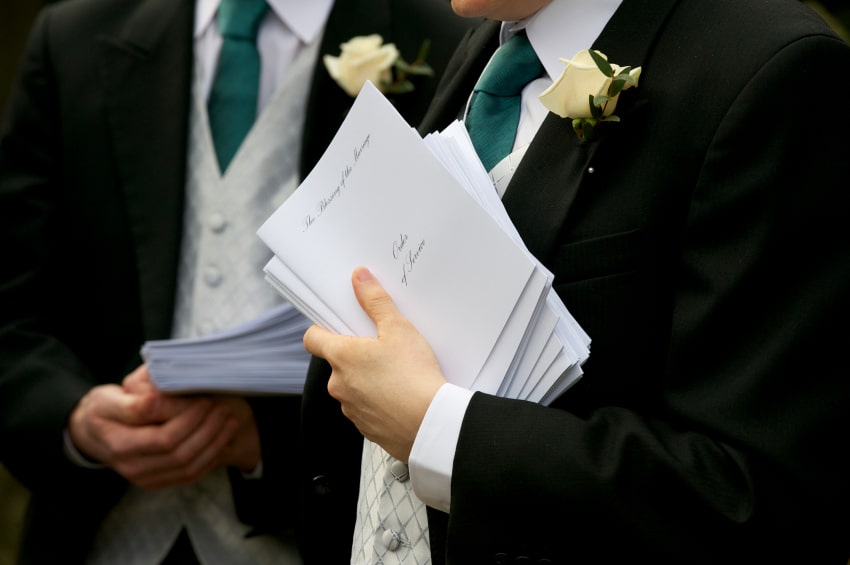 Wedding season is nigh upon us. Over two-thirds of weddings happen in the spring and summer months, and if you’re lucky enough, you’ll be asked to play a part in one of those weddings. We’ve previously covered the ins and outs of being the best man, and today we’re going to look at the responsibilities of being an usher. After the best man, the usher truly has the most practical responsibilities the day of the wedding. While being a seemingly simple role, if you aren’t paying attention to your duties, the day could end up being less than what the bride and groom had imagined — not something you want to be responsible for.

Let’s take a look at what you’ll be asked to do.

Before the Big Day

It’s an Honor to Be Asked, So Take It Seriously

Ushering may not seem like the most glamorous role to play in a friend’s or relative’s wedding. But you can be sure it’s one of the most important and most practical. While the groomsmen often just stand up front and look pretty, the ushers are seating guests, manning doors, and generally making sure that things are running smoothly while the bride is doing her last minute preparations to walk down the aisle.

Planning a wedding is stressful business for the bride and groom; part of that stress is figuring out who among friends and family will play which role. It’s an honor to be asked to be part of a wedding, so take your role seriously.

Ask the Couple About Your Responsibilities

While we go into ushering basics below, the responsibilities of the usher(s) will be different for each wedding. In some cases, the usher plays a big part; in others, it’s more of a ceremonial title because the couple wanted to “officially” include you in the festivities. Before anything else, ask the bride and groom what your responsibilities will be come the big day. Also be sure to ask about the rehearsal, groom’s dinner, and any other activities you’re expected to be a part of. As an usher, your schedule obligations are a little grayer than if you’re a groomsman.

Pay Special Attention During the Rehearsal

While you may not be a part of every wedding festivity, it’s likely that as an usher you’ll be asked to be at the wedding rehearsal. This generally happens the night before, and it’s just what it sounds like. Everybody who has a role in the wedding — bride/groom, bridesmaids/groomsmen, officiant, parents, etc — meets at the wedding site to go over what the ceremony will look like. Pay special attention, because you’ll generally have specific instructions for seating guests, as well as dismissing guests once the ceremony is completed. If needed, write down your instructions in the pocket notebook you keep with you at all times.

During the Big Day

This should go without saying, but I feel the need to say it. Show up when you’re told to show up — probably an hour or so before the ceremony begins. Be dressed according to what you were told. Have your clothing pressed and neat — no muffin-top tucking. Make sure to have eaten a snack, as wedding festivities may leave you without food for many hours, and you need energy to stay sharp and focused. Again, all common sense, but things that could be forgotten on the morning of as you’re getting ready.

Your Manner Affects the Wedding

On the day of the wedding, you will likely be the first wedding “representative” that guests see. Your manner has an effect on the tone of the wedding. Is your attire neatly pressed? Is your posture upright? Do you have a smile on your face? If you’re sloppy with your attire and deportment, the guests will see that and unconsciously form an opinion of the wedding, and even mirror that sloppiness in their own manners. If you greet them warmly and escort them properly with all the regality you can muster, the tone of the entire ceremony will follow.

Act As a Host Before the Ceremony

In the closing hour before the ceremony, the bride and groom will likely be running around with last-minute preparations. Ask how you can help — and promptly do whatever the bride or groom asks of you. As guests start arriving, you will probably be asked to “work the room,” taking people’s coats, directing them to restrooms, letting them know where gifts/cards are to be placed, making sure they sign the guestbook, etc. At this point, you’ll sort of be acting like the host of the pre-ceremony reception. Don’t go off socializing with your friends and family; there’s plenty of time for that later. You’re there to assist with wedding operations. 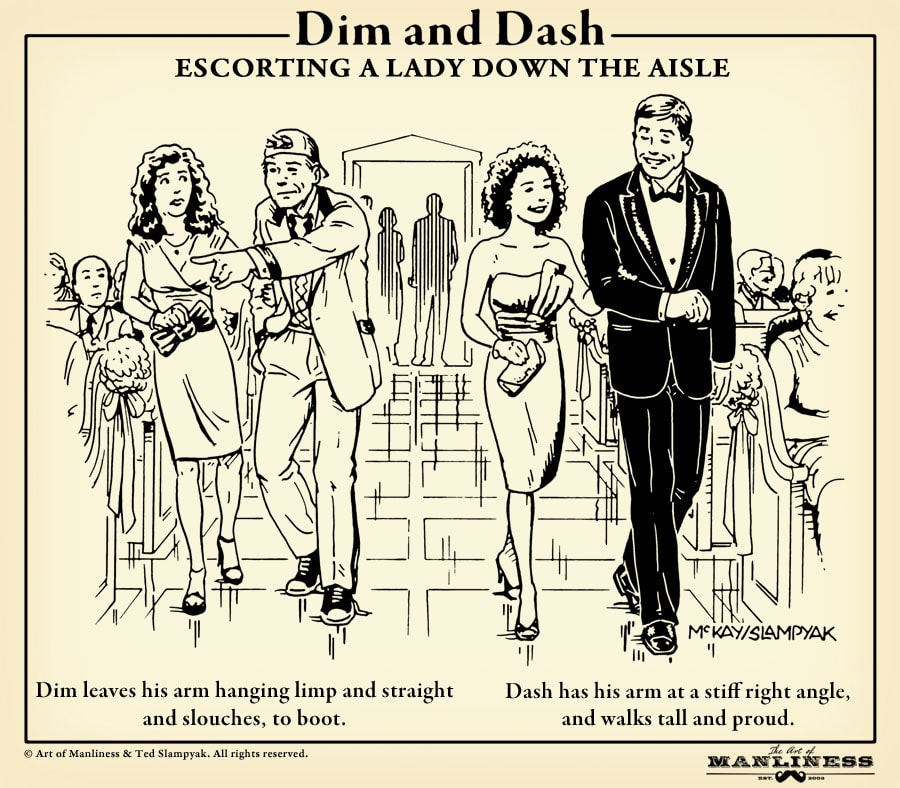 This is often the largest and most important responsibility of ushering a wedding. As guests arrive for the ceremony, you’ll have the pleasure of offering them a program and escorting them to their seats. Where guests are seated is a decision of the bride and groom, so before anything else, ask them. Oftentimes, it’s friends/relatives of the bride on one side (usually the left, as you’re looking at the altar/stage) and friends/relatives of the groom on the other (usually the right).

You’ll most likely be waiting for guests just outside of where they’ll be seated. When they approach you, you can ask if they’re a guest of the bride or groom, and escort them to the first open row at the front of where the ceremony is taking place. If the guest is a friend of both the bride and the groom, give them the best seat available on either side. (Keep in mind that the first 2-3 rows are often reserved specifically for immediate family.) If one side fills up faster, it’s okay to begin to seat folks on the other side.

When offering your arm, it is to be at a 90 degree angle (see image above). No straight-arm escorting allowed, period. It just looks awful.

Neither meander nor speed walk and bustle down the aisle. Rather, move at a natural, dignified, but efficient clip.

As you escort guests, offer some light pleasantries, such as, “What a beautiful day for a wedding,” or, “Too bad it’s raining, but at least it’s good luck!” Keep your voice low, but there’s no need for grave solemnity or whispering.

Depending on the wedding, after all the guests are seated and before the bride walks down the aisle, you may be asked to usher the grandparents or other immediate family members to their place at the front. Traditionally, the seating of these family members was done by ushers, but in modern weddings, it’s more often than not done by a sibling (most often a brother) of the bride or groom.

A few items to be aware of for each wedding (in other words – ask the bride/groom):

In some cases, as an usher, you’ll be part of the processional and either be seated at the front of the ceremony (in which case you’d take your seat after all guests and family have been seated), or standing up front with the other groomsmen. Most likely, though, you’ll be tasked with a couple remaining duties, and sit near the back. In that case, after the bride has walked down the aisle, you’ll often be asked to close the doors (if the venue has doors to be closed). From there, you’ll take a seat yourself, direct any late guests to find a seat (using the side aisles), and make sure the door closes quietly after they’ve entered. Once the ceremony has concluded, you’ll open the doors back up, and again, depending on the wishes of the bride and groom, you may be asked to dismiss rows of guests, starting from the front. If the bride and groom wish to dismiss guests themselves (a modern trend), you can stand near the doors to be sure exiting happens smoothly, and to direct guests if they have questions about what follows the ceremony.

As with everything above (hopefully this cements the idea into your head), what your role is after the ceremony depends on the specifics of the wedding you’re a part of. So just ask, ask, ask. Don’t just assume you can leave, and don’t just assume that you’re required to stick around for pictures or for the party bus to the reception. You will often be asked to be a part of pictures, but not necessarily as extensively as the formal wedding party. Just do what you’re told and smile.

Once you get to the reception, your duties are largely over. You may or may not sit at the head table (I never have as an usher), you won’t be giving a speech, and you no longer are playing the part of “host” — at this point that becomes the bride and groom’s role. So take off your jacket, loosen your tie, and cut a rug on the dance floor — it’s time to celebrate!