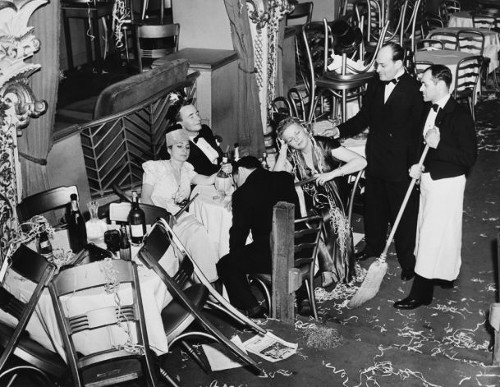 Ritual is one of the oldest and most universal forms of human expression in the world. Over the last couple of months, we have explained the reasons for its persistence and ubiquity by detailing its many and varied benefits, including the ability to carve out pockets of the sacred in a profane world, solidify bonds, and drive personal progress.

But if ritual has such a transformative, life-enriching power, why do societies, as they modernize, invariably move away from it? In the introduction to this series on the power and nature of ritual, we briefly mentioned two reasons for our current culture’s spurning of it: the high value placed on completely unfettered personal freedom and a worry over the way ritual could be employed for nefarious purposes that grew out of the aftermath of World War II. Now, as we conclude the series, we’d like to suggest a few more elements at the root of modern-day ritual resistance:

Suspicion of ritual’s link to magic. One of the key attributes of ritual is that it is an action that lacks a “practical relationship between the means one chooses to achieve certain ends.” It’s not rational to believe a rite of passage can make a boy into a man or that placing various totems around your office (a la Steven Pressfield) is going to help you write better. Thus to believe in the efficacy of these rites is to believe in a kind of magic.

People tend to have a knee-jerk reaction to the word magic, but I would encourage you to define it as Ronald L. Grimes does: as “ritual work.” Grimes argues that if a “rite not only has meaning, but works, it is magical.” Or for a modern pop culture take, it’s only weird if it doesn’t work.

Maybe putting a penny from your grandfather in your sock before every football game helps you play better because his spirit really is there helping you, or maybe the ritual simply settles your mind and gives your more confidence. Either way the ritual works. Whether rituals are effective because they invoke supernatural powers, or simply psychological ones, many really do have their intended effect – even scientific studies have shown this to be true. So if a ritual works, does it matter why it works? And if something is proven effective, is it really irrational to try it?

Even the most stridently logical and secular amongst us are highly irrational creatures; psychologists have shown that every human being is subject to numerous cognitive biases, some of which cannot be overcome even when we try to think them away. So to my mind, the only truly irrational man is he who cannot admit he is irrational. And the wisest man is he who admits he is irrational, is completely aware of it, and intentionally decides to sometimes take part in technically irrational behaviors for the benefits he knows they accrue him.

Ritual boredom. As you’ve been reading through this series, you may have thought to yourself, “This sounds great in theory, but I’ve done some of the rituals mentioned, and I haven’t experienced any of these amazing supposed benefits.”

Dr. Tom F. Driver calls this common modern experience “ritual boredom.” While he argues that it is caused by rituals being kept too rigidly and not evolving to be more relevant to modern culture, I don’t personally believe that tradition itself is the problem. Two other factors seem more salient to me:

The first is an atrophied attention span. What feels like boredom to some is experienced by another as a meaningful exploration of truth. The first person, confronted with repetition and a current of stimuli much slower than what is experienced on their phone and computer, does not feel there is enough to hold their attention and their mind drifts off to that week’s grocery list. The second person, who has a keen and genuine curiosity, is able to focus in on what is happening and dig deeper into it, asking questions like, “Why do we do this at this point? What does this symbol mean? How are these things connected?” The more they dig, the more the ritual reveals to them, and the more meaningful and interesting the ritual becomes.

Second, ritual boredom can be traced to the postmodern gap between the signifier and the signified. That is, we see rituals and symbols as meaning different things to everyone, or really not meaning anything at all. Take something like Christmas. Originally a Christian holiday (and yes, before that, based on pagan celebrations), it is now something celebrated even by some Jews and atheists. The symbols of Christmas were designed to point towards something, but now symbolize nothing more than a certain time of year and “fun” and “family.” If you don’t believe there are deeper meanings to rituals, then you won’t believe they carry special forces. And in the absence of these elevating and electrifying powers, the ritual is experienced as just boringly going through the motions.

Take New Year’s celebrations. For primitive tribes, they truly believed that each new year they re-founded the world and that in reenacting the primordial deeds performed by the gods during the period of creation, their rituals released some of the potent, transformative power that was present at the very beginning of time. That’s heady stuff. On our New Year’s Eve, we drink, watch a ball slide down a pole, wryly discuss the pathetic statistics for how many people actually keep their resolutions, and go to bed with a sigh, feeling more blah than rejuvenated. The revelry isn’t connected to the gods or mythical ancestors, to mythology or history, or even a strong sense of tradition. We do it because, I dunno, Party City says we should? Because the ritual does not re-create anything, the juices that infuse creative acts, that makes magic and transformation possible, that open up pockets of the sacred are absent, and instead of the ritual feeling extra-ordinary, like a break in the everyday, it feels excruciatingly flat, one-dimensional — like just more of the same.

Cynicism. Rituals create shared worlds of possibilities, shared visions of how things could be. Envisioning this world involves the ability to see our current world as not the only possible reality, and thus requires a certain degree of idealism. A ritualist must be able to imagine something beyond the status quo, and have the courage to share that vision with others.

I think every young man who’s ever watched Dead Poets Society felt a pang of longing, wishing he could have a club like that with his friends. Yet no young man wants to be the one to say, “Gee, fellas, what would you think about us all gathering in the woods from time to time and reading poetry to each other?” This young man would like to propose his vision of a shared world where he and his mates could be bosom buddies, but keeps the idea to himself out of fear it will be met with derisive cynicism and mocking.

Ritual is work. Building relationships and unity in a fragmented world, constructing pockets of possibilities, turning chaos into order – the process of world creation – involves a great deal of work. Continual work.

Have you come home from a formal event, one where you had to dress up, mind your manners, and watch what you said — and promptly loosened your tie, plopped on the couch, and let out an exhausted sigh? You weren’t physically fatigued, but were instead tired from the role you had just played in ritually creating a shared world with others. At such a moment, you might curse this need to “put on airs” and decide you’d rather skip out on such things in the future — to stay at home in your sweatpants just “being yourself.” And this seems like a good idea for a while, until inevitably, life starts to feel inexplicably dull and flat.

The paradox of ritual is the same paradox at the heart of all work. When we’re working at our day jobs, we dream of taking an endless vacation. But if we do take a while off, pretty soon our expected enjoyment is replaced by a feeling of restlessness and boredom. In the same way, even if we’re getting something out of our participation in certain rituals, we periodically feel like we don’t want to be bothered and would rather just skip out. But then we feel a lack of something in our lives, and re-connect with the ritual. And on the cycle goes.

Oftentimes when we lament the flatness of our modern world, and wonder “is this all there is?” we think, consciously or not, that the remedy will simply come into our lives. Or we think that there’s nothing we can do about this listlessness anyway, so why bother? But like all good things, texture and meaning – a rich, multi-layered life – doesn’t just happen. We create the texture by carving pockets of the sacred in the profane, by creating new structures for being inside different worlds of possibilities. The act of creation is always work. It never comes easily or naturally. If we want more out of life, we must go seeking it out instead of waiting for it to come to us.

Listen to our podcast on man’s need for ritual: