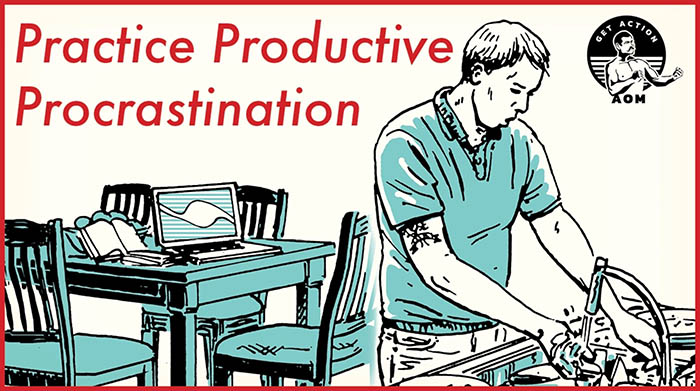 Typically, we think of productivity and procrastination as antithetical to each other.

We’re productive when we’re motivated and focused on working on what we consider to be our most urgent/important/difficult task. We procrastinate when we postpone working on that big nut. We can procrastinate actively (turning on the television instead) or passively (pretending like we’re still nominally in work mode by continuing to stare at our computer screen in-between checks of social media), but either way, we’re doing nothing, and we feel terrible about that. We beat ourselves up about it or try (unsuccessfully) to use brute force discipline to get back on track.

But there’s a better way of thinking about productivity and procrastination than seeing each as monolithic, conflicting states.

Instead of conceptualizing your productivity as this more linear thing that’s just focused on tackling your next biggest/hardest task, it’s better to think of it as a pie that you can nibble on from any direction.

That pie is filled with all the tasks — big and small — on your to-do list, and these tasks should be understood as falling into several tiers:

What normally happens is that if we can’t do a Tier 1 task, we procrastinate by doing nothing at all.

But if you’re having troubling getting going on your Tier 1 task, ask yourself if you’ve got enough mojo to work on things in either Tier 2 or 3 instead. Usually just because you’re not in the mood to write a research paper, doesn’t mean you don’t have the wherewithal to wash the dishes in the sink. If you’re stuck on creating a tedious report, can you answer outstanding emails instead?

Rather than viewing productivity as an all-or-nothing thing, and procrastination as its opposite — as a void — you can practice productive procrastination. Even if you’re not working on the task you initially set out to do, you’re still making progress on eliminating slices of your productivity pie. You’re still making progress on getting your life in order.

Rather than thinking about procrastination as a waste, think of it as preparation; procrastinating with Tier 2 and Tier 3 tasks can put you in a better position for cracking your Tier 1 nut. Lower level to-do’s may be small, but they can squat on a tremendous amount of mental bandwidth; it’s easier to get down to work on tough stuff when your home/office is organized, you know the bills are paid, your inbox is empty, etc. At the same time, knocking some smaller to-do’s off your list, can help you build momentum for tackling the big stuff.

So next time you want to take a break from something you’re working on, give yourself permission to do so; just remember to P.P.P. — Practice Productive Procrastination.

Be sure to check out our in-depth guide on how to stop procrastinating!