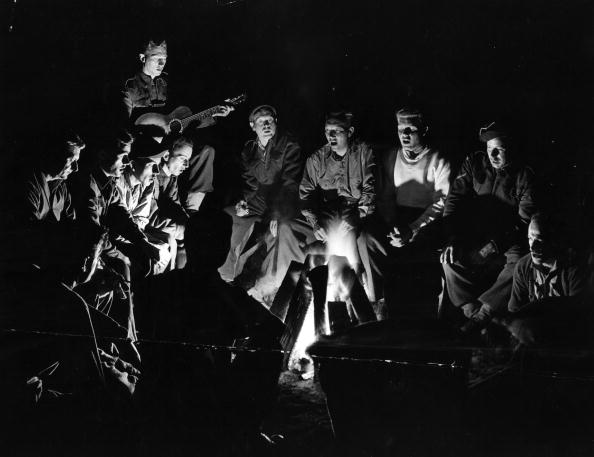 Such scenes have largely faded from our cultural photobook.

Maybe you sang with your classmates as a child (though even this experience has been curtailed along with cuts to school music programs). But when was the last time you sang in a group as a grown-up? Maybe it was the national anthem before a sporting event, “Take Me Out to the Ballgame” during the seventh inning stretch of a baseball game, “Silent Night” at Christmas Eve mass, or “Happy Birthday” at your niece’s party. As you search your mind for such experiences though, chances are good that those you can conjure up from the past year are fairly few and far between.

There are numerous factors behind the decline in communal singing. The first is that we, of course, spend less time in groups in general, and are more isolated in the modern age. Then there’s the increasing heterogeneity of society; for communal singing to happen, a culture has to have a communal stock of music — songs that everyone, from every walk of life, knows the lyrics to. Hymns used to make up a large part of this collective songbook, but people are statistically less apt to attend church these days, and when they do go, it’s frequently to a non-denominational, megachurch type congregation, in which the music can feel more like something to be spectated than participated in, and the songs often change each week, disappearing from the line-up before everyone’s learned the words.

We’ve also become more preoccupied with looking cool, and singing in front of others can make us feel insecure and dorky. And we simply have more forms of entertainment available these days than in the past, when gathering around the piano in the parlor was considered a good time.

Yet, while communal singing has gotten more infrequent, we arguably need it now more than ever.

The Benefits of Singing in a Group 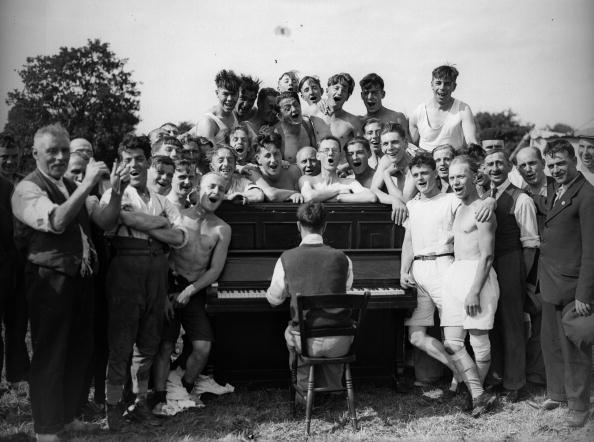 In When: The Scientific Secrets of Perfect Timing, Daniel Pink muses that communal singing ought to be seen in the same way as physical exercise; that is, as “one of the few activities in life that is [so] indisputably good for us . . . People would be silly not to do it.”

Indeed, the research-backed benefits of group singing are numerous, and extend to both body and mind:

What accounts for how potently communal singing buoys our overall well-being? Humans just seem to crave doing things in sync with each other. Singing in a group offers a visceral sense of belonging, of being part of something bigger than oneself, and even of greater meaning and purpose.

When Pink asked David Simmons, artistic director of the Congressional Chorus in Washington D.C., “Why do human beings sing in groups?” he paused for a moment and replied: “It makes people feel like they’re not alone in the world.” 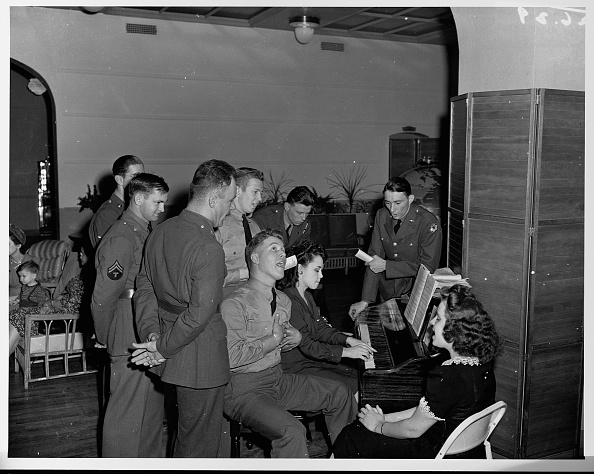 While the sing-a-long has something of a “sissy” connotation in the modern age, its cohesion-building effects have in fact long given this activity a primary place within all-male groups, which have historically been tasked with pursuits — like hunting, sports, and war — that require keen camaraderie. Hence the singing that takes place among teams and spectators before, after, and during athletic events and the library of drinking songs sung in once male-only pubs. Particularly in the military, sailors and soldiers (including ancient Spartan warriors), did a lot of communal singing both on the frontlines and when taking some R&R, as the gallery below shows. 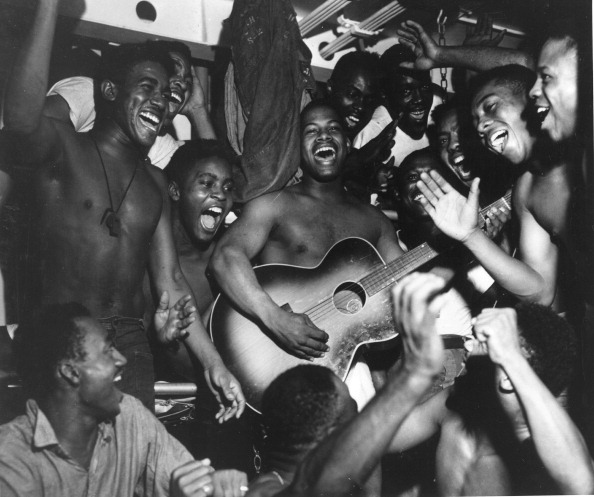 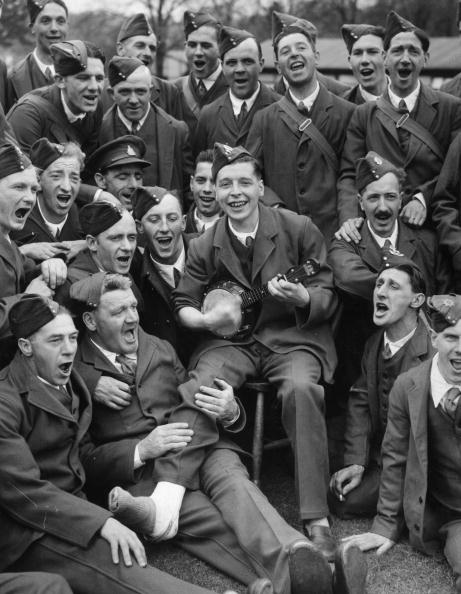 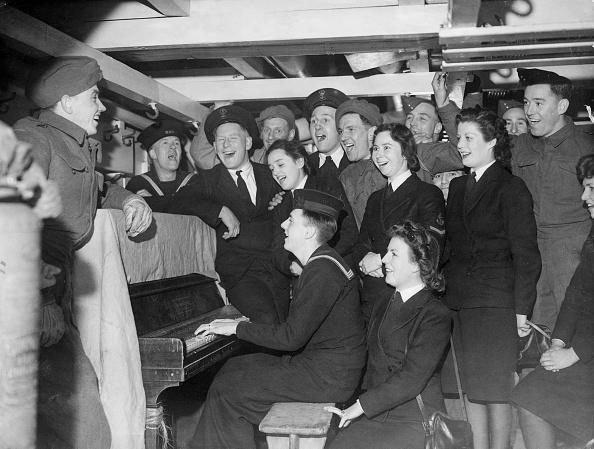 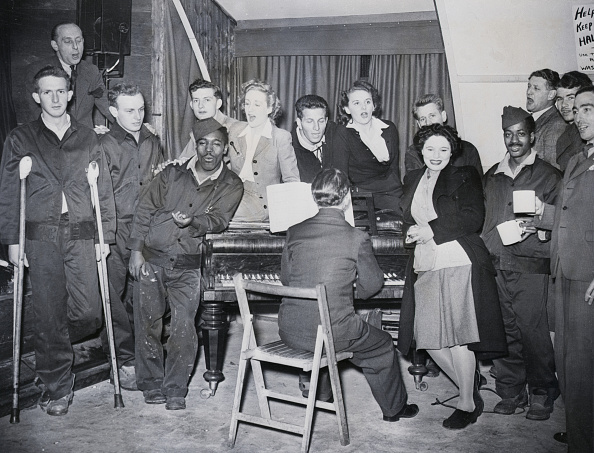 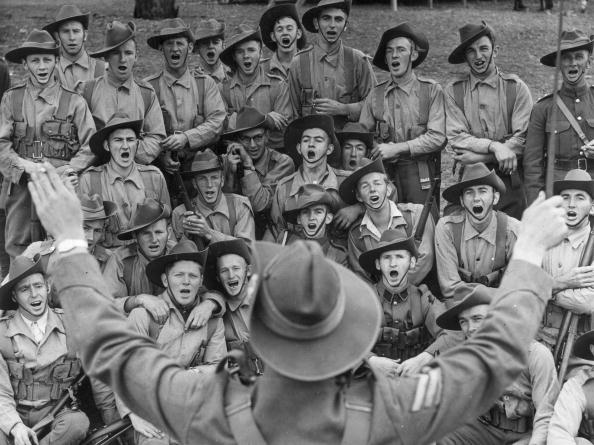 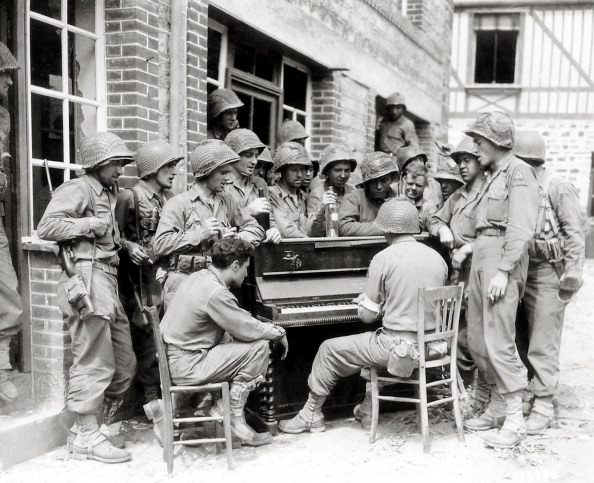 How to Bring Back Group Singing 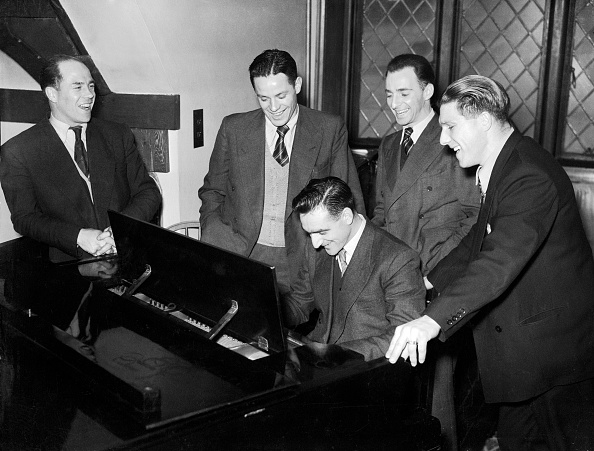 If singing in groups is so very good for us, how do we incorporate more of it into our lives?

You could go out and join a church or community choir, participation in which people tend to find very enriching. But communal singing can be incorporated in less structured and more spontaneous ways throughout our lives as well.

In the mid-90s, the National Association for Music Education set out to revive this activity in homes, community organizations, and schools by launching a “Get America Singing…Again!” campaign. According to its own materials, “The campaign [had] two main objectives: the first of which [was] to establish a common song repertoire that Americans, of all ages, know and can sing.” To this end, the NAFME compiled a collection of 88 songs every American should be familiar with and able to belt out with their fellow citizens. (You can see the list here; how many do you know — not only in recognizing the title, but remembering all the lyrics?)

“The campaign’s second objective [was] to promote community singing”:

This includes encouraging audience singing at concerts and recitals, opening or closing public gatherings with a song, and encouraging singing at clubs, private meetings, and in homes. We need singing leadership from Americans in all walks of life . . . school and church leaders, club presidents, elected civic leaders, radio and TV personalities, camp and scout leaders, and people who get together socially.

So, why not make your own plans to build up the common life of singing in your community? Plan now to include some audience participation at a concert or other public event. Throw in a song or two at the beginning of a meeting to melt the ice and get communication going. Restore the fun of camp singing next time you gather a group around the fire. Get out the guitar, sit down at the piano, tune up the Autoharp, add a bass, drums, or any other instruments you can lay your hands on, and have a sing-along. Think how you can be a positive agent for change; see how singing can add so much to life together on this planet. People will bless you for including them in the power of active music making through singing.

While establishing a shared stock of songs for hundreds of millions of Americans might have been a quixotic quest, NAFME’s ideas for increasing the prevalence of communal singing are more doable. 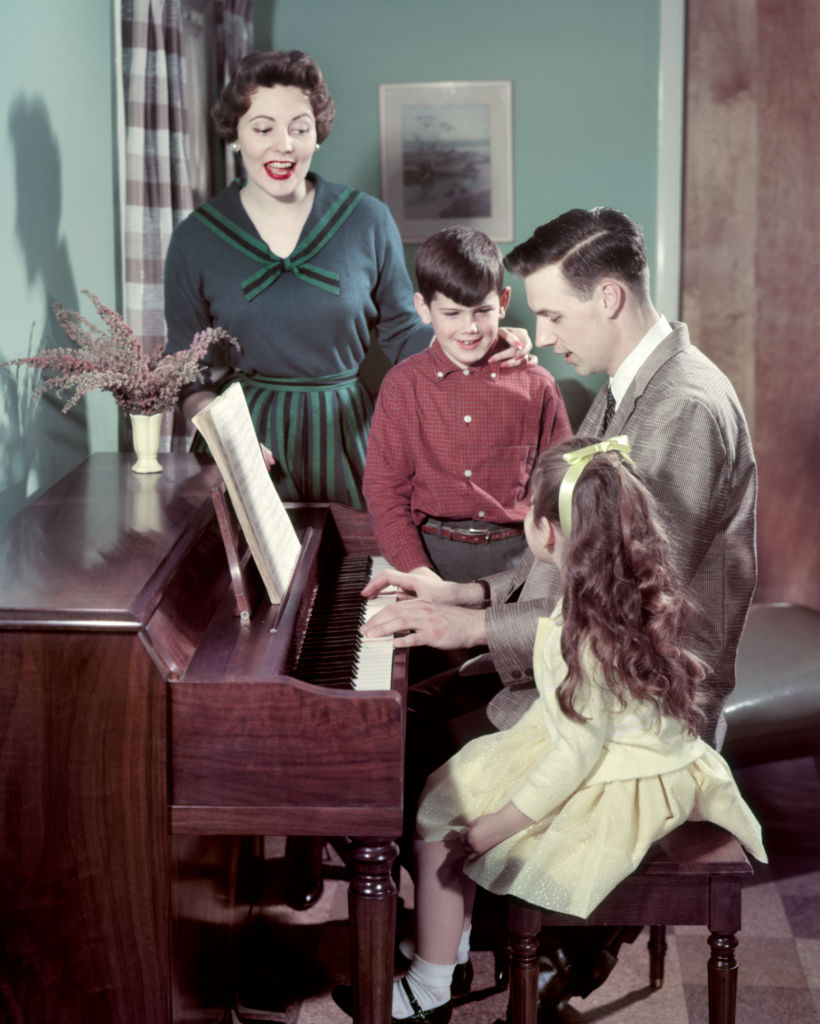 Instrumental accompaniment to one’s sing-a-longs is nice, but not necessary. We generally sing a cappella as a family, though our kids are slowly learning how to play piano and adding in some rough riffs now and again.

The easiest place to start implementing the above suggestions is within your own home. We sing a song as a family at both the start and end of our weekly family meetings. Church is one of the readiest sources for building a familial repertoire of music, but you could also incorporate secular pop songs your family enjoys or finds meaningful. 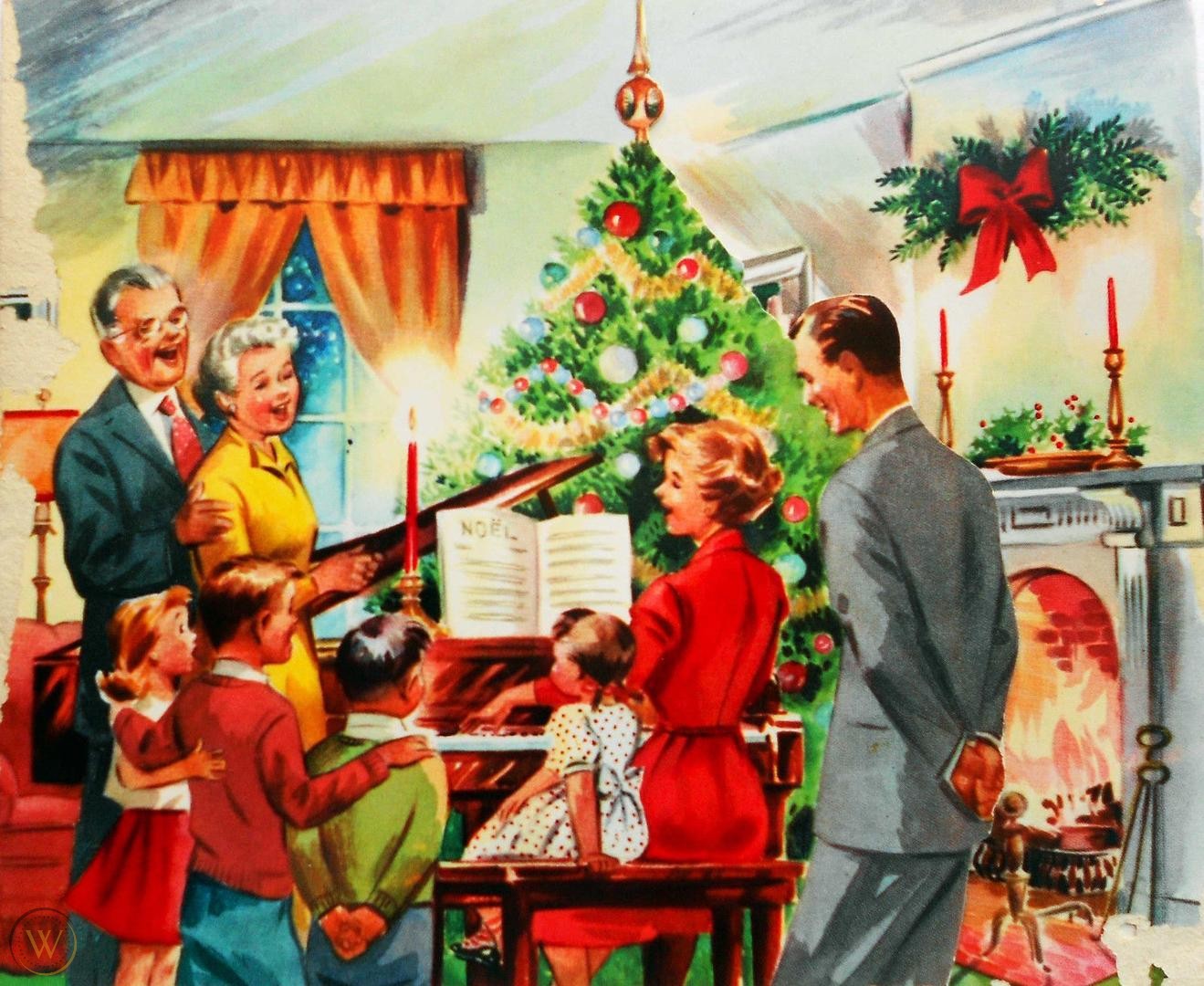 The other most accessible way of getting more group singing into your life occurs during Christmastime. The season is such fertile ground for communal music-making for two reasons: 1) people feel more sentimental, and are more apt to take a flyer on being “corny,” and 2) it’s one of the few areas of life where there remains a widely shared repertoire of songs; almost everyone knows at least the first verse to a dozen or more Christmas carols.

At the annual Christmas party we throw for our friends, we include a time in which we gather around the piano (we have a friend who can play), and sing holiday songs together. It’s always a highlight of the evening.

As the cheapest of cheap forms of recreation, a boon to physical and mental health, and a builder of bonds in an age of loneliness, we all ought to look for more opportunities to raise our voices in unison. Whether at this time of year, or at others, we all need more scenes like this in our lives: