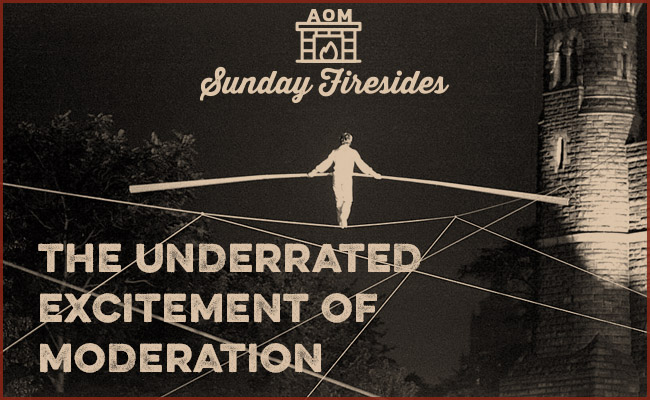 In recent times, “moderation” has become a dirty word. Our politics, opinions, and lifestyles are polarized. Our reactions run to the extremes.

To be in the middle seems tepid, mealy, lukewarm. As Carlin Barton notes in Roman Honor,  “There is no romance in Middle America, middle management, or middle age.”

Not so “for the ancient Romans,” for whom “honor pivoted on the Heroic Middle.” They saw the ability to compromise as a hedge against tyranny, and a manifestation of one’s self-control. Moderation was not:

the timid restraint, the joyless surrender to conventionality of the modern bourgeois, nor was it an excuse for complacency or conventionality. On the contrary, in the Roman mind, moderation was a sort of firebreak against the conflagration of ambition and passion . . . Poise, equanimity, came hard and unnaturally. To be modest, to be ‘measured,’ showed determination, the will of men and women to take their fates in their hands, to direct their own behavior in the face of endless temptations to self-indulgence or self-pity.

Aristotle’s conception of character was centrally based on this idea; for him, virtue was a golden mean that threaded the needle between lack and excess. Courage was the mean between recklessness and timidity; righteous anger was the mean between debilitating rage and indifferent passivity.

For the Greek philosopher, and the Romans of old, doing the right thing, at the right time, in the right way was a vitalizing challenge that refined the soul. As Barton puts it, “In this delicate balancing act, the point of greatest stress and drama was the middle.”

Far from being banal, then, moderation can unexpectedly offer the “exhilaration and sense of immediacy” of living life on the edge — of walking the tight rope of honor and character.