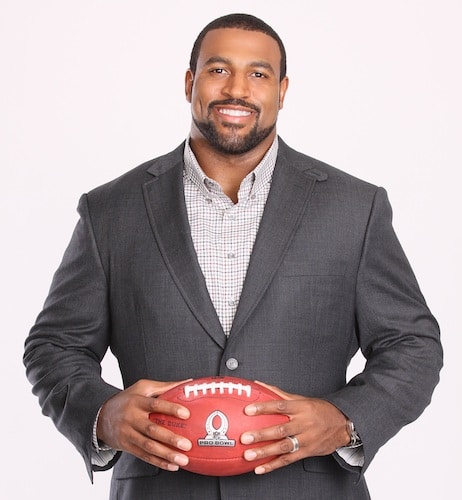 It seems like every little boy, at some point, has dreams of being a pro athlete. While the chances are slim he’ll hold onto that dream, let alone make it a reality, our interviewee today did just that. We had the chance to talk with NFL player Duane Brown about how he made his childhood dream a reality, and about a few of the ins and outs of daily life in the NFL. As an offensive lineman, he doesn’t get as much glory or TV time as the QB, (and as a humble man he won’t tell you this himself) but he was named an All-Pro last year, and is often called the best tackle in all of football.

1. Tell us a little about yourself (Where are you from? How old are you? Describe just a little bit how you got to the NFL, etc.).

I am from Richmond, Virginia and had the pleasure of going to college in my home state at Virginia Tech (Go Hokies!). I’m 28 years old and I have two incredible children and the most amazing woman in the world as my wife. I’ve been playing football since I was six and was drafted in the first round in 2008 by the Houston Texans. I’ve been with Houston ever since and I love living in the city of Houston.

2. Why did you want to become a professional football player? When did you know it was what you wanted to do?


I knew since an early age that I wanted to be a pro. My dad had this videotape called “NFL Crunch Course” that I used to watch all the time and I would always imagine myself in one of those positions. When I got to Virginia Tech, I progressed rapidly and knew that I would have a great opportunity to live my dream soon after.

3. It’s extremely difficult to make it into the NFL. Only .2% of high school football players will ever play for a NFL team. What do you think are the most important factors in beating those crazy odds? Work? Talent? Luck? What advice would you give to a young man who dreams of making it to the NFL, or becoming any kind of professional athlete?


It’s a perfect combination of work, talent, and luck. Some people have a God-given talent and for them I’d recommend working tirelessly to be great, because talent alone won’t always get you here or keep you here. My favorite quote is “hard work beats talent if talent doesn’t work hard.”

4. Tell us a little bit about your high school career and your college recruitment. In today’s world, teenagers are being recruited younger and younger by the major college programs. Was that your experience? Were you tabbed from a young age to be a potential star?

I got recruited heavily in my junior and senior year of high school. When I got injured with a broken leg my senior year and sat out for two months of the season, recruitment dropped significantly. In high school I played tight end and defensive end, and a lot of colleges didn’t know which side of the ball I’d be in their program. Even with my injury, Virginia Tech stuck by my side and a representative even came to visit me after my surgery. That stayed with me and created a special relationship with the staff that led me to choose VT as my future home. I played tight end and right tackle up until my senior year, when coaches moved me to the left tackle position.

5. What was your college experience like as a Division I football player?

I had a great experience at Virginia Tech. They have a great program and challenging coursework. The city of Blacksburg really embraces the football program and I created some great friendships and memories while I was there. The VT spirit and Hokie nation on game day is an indescribable atmosphere.

6. You switched positions in college – from tight end to offensive line. No matter the job, switching to a new position (or department) can be challenging. Were you excited? Was it difficult?

It was a mixture of emotions. I had the luxury of catching a touchdown pass my freshman year as a tight end, so I got used to that feeling. I was a second string tight end, though, so having the ability to start as a tackle was intriguing. I was also nervous, however, because I didn’t have a gauge on how I would perform. When the decision was made to put me at left tackle permanently, I was extremely excited because I was told how good I could be and the type of opportunity it could create for me in the pros. I was confident I could be successful.

7. What is an average day like for you? And also, what does a typical game day look like? Do you have any pre-game rituals?

An average day consists of waking up at 6am, heading to practice and heading home around 5pm. While at practice we meet for about 4 hours, practice for 2 hours, and I work out for 1.5 hours and spend the rest of the day studying film and doing maintenance on my body. On game day I like to get to the stadium early. Usually I listen to music or watch a few scenes from the movie 300 while I’m preparing for battle.

During the season it’s kind of tough. The majority of my time and energy is fully focused on football, whether it’s practice, personal workouts, or Texan related events. My wife and I go to the movies a lot or serial watch shows for fun. I enjoy face-timing with and talking to my kids every chance I get.

Game day. There is nothing like running out of the tunnel and feeling that adrenalin rush — getting to do something you love with a group of friends who share a common goal.

The wear and tear on your body. Waking up with aches and pains.

11. What’s the biggest misconception people have about what it’s like to be a NFL player?

People don’t realize how much work we put in outside of game day. They think we have it easy or are not deserving of the contracts we get, as if we won the lottery. There is so much work that goes into doing what we do that no one sees.

12. Any other advice, tips, commentary, or anecdotes you’d like to add?

Don’t take anything for granted — what you have, people you love, or what you do. Nothing is guaranteed. Having an attitude of gratitude is the way I approach my life.