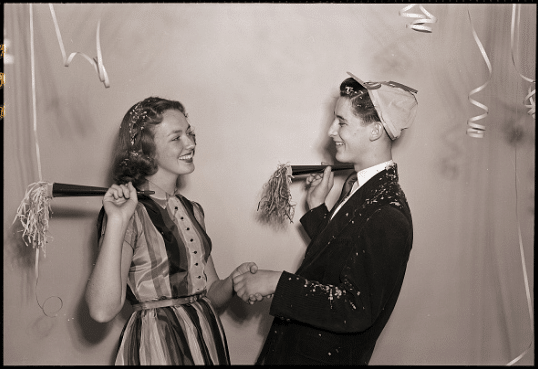 Editor’s Note: This excerpt is from Etiquette for Young Moderns, a book originally published in 1954 and geared towards teens. For more tips on the subject, see our post on How to Make Introductions Like a Gentleman.

Then cheer up — and settle down to learning the whys and wherefores of introductions. There aren’t many; they aren’t difficult. They simplify rather than complicate, this business of introducing people. And, once you have these simple formulas fixed in your mind, you won’t worry about making a fumble.

First, introduce men and boys to women and girls; and younger people to older people. In translation, this means to mention first the name of the person to whom you’re making the introduction. (When the introduction involves two people of the same sex and approximately the same age, the order doesn’t matter.)

Next, make your introduction as simple and uncluttered as possible. Introduce one person to another, instead of doubling up and introducing both people to each other.

When to use Mr. or Miss, instead of first names?

Only when you would usually address the person that way. Your own friends are presented as Paul O’Malley, Jean Dart, and Sam Steiner. Your teacher and your next-door neighbor would naturally be Miss Jamison and Mr. Arnold. The exceptions are relatives whose last names differ from yours, such as your stepfather and your married sister. Introduce them as “My Father (or stepfather), Mr. Reed,” and “My sister, Mrs. Talmadge.”

How do you introduce people with titles, such as doctors and clergymen?

A doctor, a dentist, a minister with a doctor of divinity degree, or an educator with a doctor’s degree should be introduced as “Doctor”; a bishop as “Bishop”; a rabbi as “Rabbi”; a priest as “Father”; other clergymen as “Mister”; a member of the sisterhood as “Sister”; a judge as “Judge”; and a mayor as “His Honor, Mayor _____.”

Which introduction phrases are “acceptable”?

But it’s taboo to give orders — “Shirley, meet Harry Payne” or “Tom, shake hands with Arthur.” And “May I present…?” is more formal than most of the introductions you’ll make.

Don’t cover up by mumbling, “This is James Blurp.” Come right out with, “I’m sorry, James, I don’t remember your last name.” James will answer your S.O.S., never fear.

How to acknowledge an introduction?

You’re always safe with “How do you do,” and you’re more likely to make a hit if you add the other person’s name to your greeting. “Hello” is all right if only young people are present. It shows more respect for older people to say, “How do you do.”

Frills, such as “Charmed, I’m sure” or “Pleased to meet you,” sound insincere. If you’ve looked forward to meeting Polly Franklin, say so with a straightforward, “I’m very glad to know you, Polly.” But don’t embarrass her by adding a vague “Oh, I’ve heard so much about you!” If you really have heard complimentary remarks about her, tell the source. “My cousin, Tom Bobbitt, says you’re his favorite dance partner!”

When do you shake hands?

Handshaking is always in order when men and boys are introduced to each other. The matter is optional when a boy is introduced to a girl — and it’s the girl’s option! But if the boy unwittingly makes the first move, the girl should meet him halfway, instead of leaving him with his hand dangling in mid-air. And do make yours a firm, brief handclasp, not one of the prolonged-pumping or flabby-fisted varieties.

Must you always stand up for introductions?

The ups and downs of introductions are easy when you follow these two general rules: 1) A boy always rises to the occasion, no matter whom he’s meeting or greeting. 2) It’s a “must” for a girl to stand only on being introduced to older people, although it would be courteous of her to rise to greet another girl who’s already standing.

What about the confusion of double introductions?

That’s an easy one — there’s no confusion! Here’s what happens when two couples meet and only the boys know each other:

Your responsibility doesn’t end with introductions. It’s up to you to fill the awkward pause that may follow the how-do-you-do’s. Don’t direct your remarks to one person. Swing the conversation into some channel where all of you can navigate equally well.

Bring the third person up to date on the conversation: “Stuart and I were arguing about ‘hot rods’ as a highway menace. What’s your opinion, Ralph?” or “We’ve been trying to decide which movie to see. Have you any suggestions, Mrs. Entwistle?”

Extend an invitation to the person who has just joined you: “Doris and I are on our way to the library, Helen. Would you like to come along?” or “Won’t you join us for a soda, Harold?”

Or, as a last resort, identify one friend for the other: “Sally was my bunkmate at camp last summer, Enid.” But don’t make your identification tags too personal, such as “Connie is going steady with ‘Tarzan’ Oaks, so beware!” or, “All the girls think Baxter is the best looking boy in school.”

A good host, no matter how busy, always starts the conversation before he abandons newly-met guests. But if your host neglects this, the first conversational attempt is up to the person to whom the introduction was made.

What can you say to someone you’ve just met?

A thousand things, from airplanes to zoos, and including radio, TV, books, movies, records, and sports.

“Have you ever flown? I’m trying to talk my folks into letting me take a plane when I visit my aunt in San Francisco next month.”

“Have you read The Conquest of Everest? I’m making a book report on it next week.”

“Did you get to see any of the World Series? I was lucky enough to watch a telecast of the last game.”

Don’t save your welcome mat for large, pre-arranged parties. You’re automatically labeled “host” or “hostess” when you have even one guest in your home.

If the family circle is in the living room when your date arrives, make a general introduction: “Folks, this is Jack Saunders. Jack, I’d like you to meet my mother, my father, my uncle — Mr. Pinero — and my brother, George.” You’d introduce a girl the same way.

(At school your teachers are host and hostesses. Introduce your mother to Miss Stark — even though Miss Stark is the younger of the two — but in the case of Mr. Gaines, the rule of introducing men to women holds: “Mother, this is Mr. Gaines, my science teacher.”)

As a party hostess, you should see that all your guests meet each other. But that doesn’t call for a round robin of introductions for every new arrival. Your introductions will be useless if you pop them off in rapid-fire succession. Present the newcomer to a small group of people, at first — “Jane Parker, I’d like you to meet Phyllis Croft, Mark Arbisi, and Dan Walsek. Jane and I went hosteling together last summer.” Later in the evening, catch up with Jane and introduce her to anyone she hasn’t met.

What to do if so many guests arrive at once that you can’t do the honors all around?

Just announce: “I’m going to leave you ‘on your own’ and ask you to introduce yourselves.” Later, you can check to see that any two you might be particularly congenial have met. Or you can rescue any unusually shy guests who don’t seem to be mixing with the others.

You needn’t wait for introductions when you’re a guest at a private party. Meet your fellow guests halfway by offering, “We haven’t met, have we? I’m Ted Hughes.”

The girl to whom you speak will reply, “How do you do. I’m Beth Crosby,” and you take it from there as if you’d been introduced by your hostess. Or, if it’s a dating affair, the boys first introduce themselves to each other, then their dates.

The same technique holds good for introducing yourself to receiving lines. But tone it down to a restrained “Good evening. I’m Robert Collins.” Very often, the first person in the line will repeat your name to the next person — “Mr. Hammer, I’d like to introduce Robert Collins.” Your reply of course, is “How do you do, Mr. Hammer” — and so on down the line.

The chaperons at a party or dance, too, deserve at least a moment of your attention. Take time to introduce yourself to them and make some comment, such as, “The decorations are most unusual, aren’t they?” Then they’ll remember you as “that charming Hazel Hopkins” instead of “that tall thin girl who didn’t look at us all evening.”

At a school affair, be sure to greet the principal and any teachers who are present. Identify yourself by name and grade — Raymond Wentzel, 10-A — so they can place you immediately.

With fellow students, of course, you’re more casual. It’s friendly, not forward, to say hello to the new girl in your math class. But never neglect introductions. Don’t settle for a “Hi, there!” Welcome her with, “Hello, I’m Frank Ward. You’re new at Central High, aren’t you?”

In business, it’s necessary to add some remark to identify yourself. You could start an interview with a prospective employer by saying, “Good morning, Mr. Marino. I’m Dan Skalla. Mr. Knowles suggested that I see you about an opening in your shipping department.” And when you’re new on a job, you’d explain to the other employees, “I’m Nancy Forker, Mr. Lamb’s new typist.”

An explanation would also be necessary if you met an acquaintance who didn’t seem to remember you. Help him over his embarrassment with, “I’m Vivian de Camp. We met at Pat Nelson’s clam bake last summer.”

Goodbyes are as important as hellos. What if you didn’t have much to say during the brief chat between David and his cousin Jonathan? You were introduced to Jonathan, and it’s rude to turn your back on him abruptly when you leave. It’s unnecessary, too. There’s no tongue-twisting about “I’m glad I met you” or “I’ve enjoyed meeting you.” If you feel more enthusiastic about him, you might say, “I hope to see you again soon.”

And if Jonathan beats you to it with some such comment, you’re being paid a compliment. A careless “Sure thing” or “Likewise” or “Same here” isn’t good enough. Your sincere “Thank you” is what’s needed to put a fine finishing touch to an introduction. 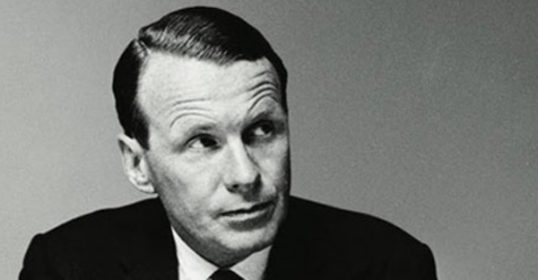