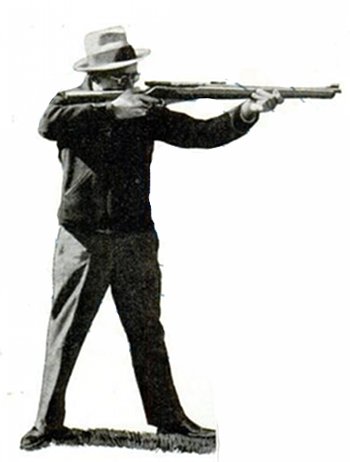 From some men, learning how to properly and safely fire a rifle is a skill they picked up when they were just knee high to a grasshopper. These guys probably got a .22 for their 12th birthday and spent summers in the woods plinking tin cans and squirrels and autumns hunting deer with their dads and grandpas.

Me? I wasn’t one of those guys.

But lately I’ve been wanting to learn how to fire a variety of firearms. I’m sure there are other men out there who, like me, went their entire life not ever shooting a rifle, but now have the desire to learn. It might be because he wants to take up hunting. Maybe he’s interested in home protection. Or perhaps he’s just interested in marksmanship as a hobby in and of itself. Whatever your reasons are for wanting to learn how to fire a rifle, you need to know how to do it safely and correctly.

A few months ago we did a post on firing a handgun safely and correctly. This time we’ll focus on how to shoot a rifle. So I headed back over to the U.S. Shooting Academy here in Tulsa, OK to talk to Mike Seeklander, Director of Training at the Academy. He explained the very basics of firing a rifle and today I’ll share what I learned with you.

The Four Cardinal Safety Rules of Firing a Rifle

Just as he did when we talked about firing a handgun, the very first thing Mike brought up were four rules, that if followed strictly, will keep you and others safe so you can have a good time firing off a few rounds.

2. Always keep the firearm pointed in a safe direction, a direction where a negligent discharge would cause minimum property damage and zero physical injury. The safest direction to point a gun is always downrange (as long as there aren’t any people downrange!).

4. Always be sure of your target, backstop, and beyond. You want to be aware of what’s in your line of fire. This isn’t usually a concern if you go to a professional gun range. They make sure that people and property stay out of the path of the guns firing downrange. Where this becomes a concern is when you go shoot with your buddy out on his property. This is especially important when firing high powered rifles as their bullets travel further than bullets fired from a handgun.

Listen to Mike: “Ask your friend what exactly is beyond the target and backstop you’re shooting at, especially when you’re shooting into a wooded area. Don’t just settle for, ‘Oh, don’t worry. There’s nothing back there.’ Ask specifically if there are any houses, property, etc beyond your backstop. Err on the side of being overly cautious.”

Rifles are high powered firearms typically used to hit targets at long distances. Rifles are designed to be fired from the shoulder. Grooves, called rifling (hence the name rifle), are cut into the barrel of a rifle. Rifling makes the bullet spin as it leaves the muzzle, making the bullet much more accurate and stable in flight.

There are a variety of rifles out on the market that serve different purposes. Here’s a quick rundown of the most common.

Bolt action rifles. Hunters often use a bolt action rifle like the Winchester Model 70 which requires the shooter to manually open and close the breech of the gun to eject a spent casing and load a new one.

How to Stand When Firing a Rifle

There are two common stances when firing a rifle: bladed-off and a squared, “athletic stance.” 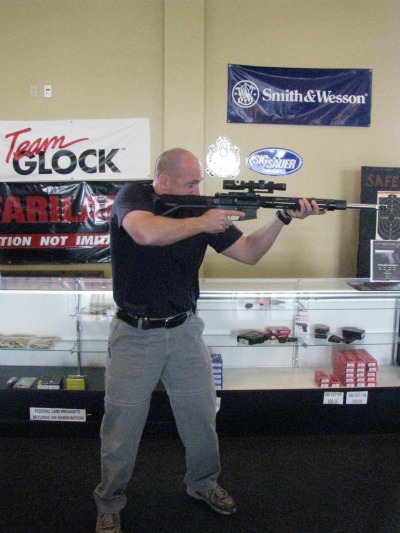 Many first-time shooters stand in a bladed-off stance when firing a rifle. They probably saw their favorite cowboys or action heroes in movies take this stance, so they assume it’s the best way to stand. Mike says that while a bladed stance is good for competition shooters who need precision in their aim, it’s not a great stance for shooters in more tactical situations that require rapid shots with minimal muzzle rise.

Squared or athletic stance. Mike and the folks at the U.S. Shooting Academy teach their students to assume an athletic stance when firing a rifle. Square your shoulders up with the target. Stand with your feet shoulder-width apart on a straight line. Stagger your strong side foot about six inches behind your weak side foot.

Place the buttstock of the rifle near the centerline of the body and high up on the chest. Keep your elbows down. 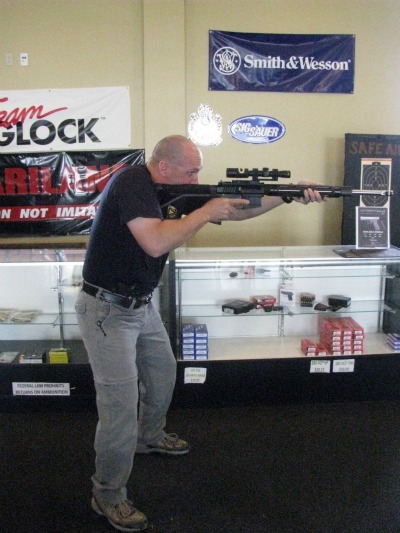 The biggest advantage of the athletic stance over the bladed stance is that it helps in reducing the effects of  recoil when firing a rifle. Think about it. If you’re a lineman in football and you want to resist the other guy pushing you backwards, what stance would give you more balance? Being squared up with the other guy or standing sideways with just one of your shoulders towards him? Squared up, of course.

Mike recommends an athletic rifle stance for most shooting situations.

How to Hold a Rifle

Rifle with pistol grip. If your rifle has a pistol grip, like the AR-15 or JP-15, center the grip in the “V” at the junction of the thumb and index finger of your trigger hand. Grip the gun high on the back strap (the back strap is the back of the grip on the gun). Like so: 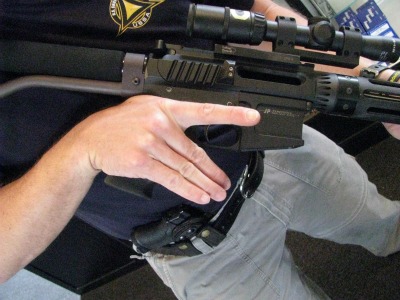 Rifle without a pistol grip. Most bolt action or lever action rifles don’t have a pistol grip like the AR-15. What they typically have instead is a crook between the stock and the trigger guard.  Like so:

With these sorts of rifles, center the nook in the “V” at the junction of the thumb and index finger of your trigger hand. Grip the gun high on the nook.

The support hand should grip the forestock (or handguards if you’re shooting an AR-15) of the rifle roughly midway down the length of the rifle. Here’s Mike demonstrating for us: 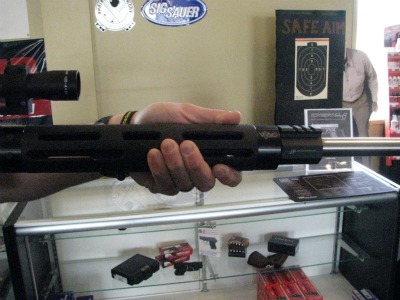 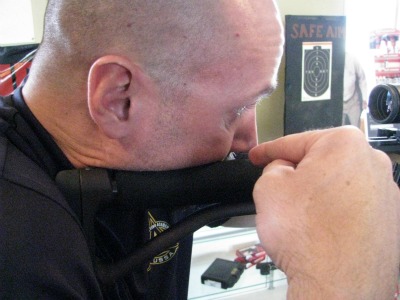 You’re now ready to aim and fire your rifle.

How to Aim a Rifle

Rifles can have different kinds of sighting systems depending on what you’re using your rifle for. What sighting system a rifle has also depends a lot on the preference of the shooter. Three common sighting systems you’ll see on a rifle are: open sights, aperture sights, and scope sights.

Aiming a Rifle with Open Sights

Open sights use a notch of some sort as the rear sight. They come standard with most rifles. We talked about how to aim with open sights in our post about firing a handgun. The same principles apply here. I won’t repeat what I wrote, so refer back to that post for tips on aiming a rifle with open sights.

Aiming a Rifle with Aperture Sights 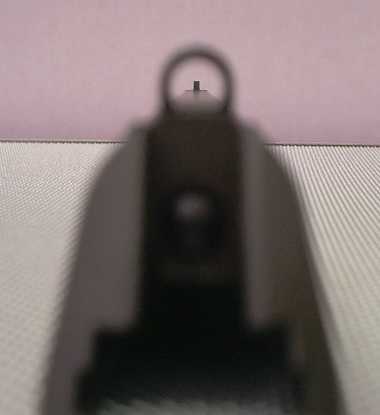 Aperture sight (or peep sight) rifles have a similar front sight to open sight rifles. The difference is the rear sight. Instead of an open notch, the rear sight is a small ring mounted close to the shooter’s eye. There are different kinds of aperture sights, the most common being the ghost ring sight.

Aperture sights allow you to acquire your aim more quickly and more accurately than when using open sights. One of the problems with open sights is that it forces the eye to focus on three objects at the same time: the rear sight, the front sight, and the target. This is impossible to do, so one of the points of focus will be blurry. Aiming an open sight gun requires the shooter to know which object needs to be blurry and which objects need to be in focus. Focusing on the correct points can take precious time.

Aperture sights speed-up getting a correct sight picture by removing one of the objects in the shooter’s line of sight, specifically the rear sight. Looking through the rear ring causes your eye to automatically center on the front sight at the muzzle of the gun, thus providing you with a more accurate aim, acquired more quickly compared to using an open sight.

To aim with an aperture sight, simply look through the rear ring sight, attempting to only focus on the front sight and the target. The ring will blur until it is almost invisible (hence the name, ghost ring sight).

How to Aim a Rifle With a Scope 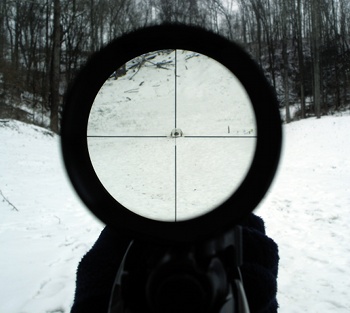 Scopes provide the most accurate and easy sighting on a rifle. They allow the shooter to magnify their target for better target definition at long ranges. A scope’s most useful attribute is that everything in the shooter’s field of view is in the same optical plane. Translation: there’s no need for your eye to balance focusing on multiple objects like you do with open sights and aperture sights. You can keep both the crosshairs and the target in focus. Just aim your cross hairs at your target and shoot.

Well, I wish it were that easy. A novice shooter might notice that despite a steady hand, all their shots end up nowhere near the crosshairs of the scope. For maximum accuracy with a scope, you have to “zero” it. Zeroing a rifle is a somewhat technical process for a beginner shooter and warrants its own article explaining how to do it. I’ll do a follow-up article on how to zero a scope in the future.

To fire a gun, we often use the popular phrase “pull the trigger.” However, to fire a gun properly, you don’t actually want to pull the trigger, but rather press it in a controlled fashion so you don’t disrupt your sights. Managing the trigger on a rifle is similar to doing so on a handgun, so here’s a review of the basics we covered last time:

Have any other tips for the first time rifle shooter? Share them with us in the comments!

Editor’s note: This article is about how to fire a rifle safely and correctly. It is not a debate about gun rights or whether guns are stupid or awesome. Keep it on topic or be deleted. 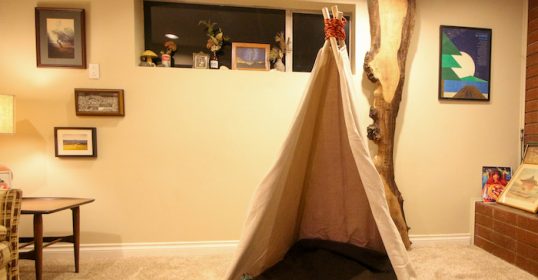