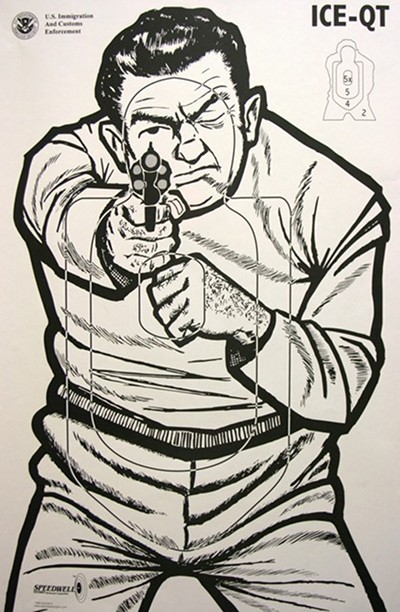 I grew up around guns my entire childhood. My dad was a federal game warden, so seeing him holster up or clean his gun are some of my boyhood memories. Despite being around guns, I never really took an interest in them. I’m not sure why. I guess I just saw them as my dad’s work stuff. Nothing to get really excited about.

A few months ago, I had a sudden urge to shoot a gun. I called my dad on the phone. “Hey Dad. I want to learn to shoot a handgun. Can you teach me how?”

He was sort of surprised.

“Why do you want to learn to shoot a gun all of a sudden?” he asked.

“Oh, I don’t know. It’s just something I think I should know how to do.”

So my dad took me, my brother, and my wife, to the gun range and showed us how to fire a gun.

It got me thinking. I know I’m not the only man out there who has gone their entire life without shooting a gun. For some of these men it’s a deliberate choice. They don’t want anything to do with guns and that’s cool.

But I’m sure there are a lot of men out there who have never fired a gun, but like me have the desire to do so. Or maybe you never shot a gun, but got invited to the gun range by some buddies. You want to go, but you don’t want to look like an idiot when you handle the gun. You’d like to have an idea of how to fire a gun safely and correctly before you go.

To get the lowdown on how to shoot a handgun safely and correctly, I headed over to the United States Shooting Academy in Tulsa, OK and talked to Mike Seeklander, the Direct of Training at the Academy. He explained the basics of firing a handgun so a first-time shooter could do so safely and semi-accurately (the accuracy part will take some practice!).

The Four Cardinal Safety Rules of Firing a Handgun

The very first thing Mike brought up were four rules, that if followed strictly, will keep you and others safe so you can have a good time unloading a few rounds.

2. Always keep the firearm pointed in a safe direction, a direction where a negligent discharge would cause minimum property damage and zero physical injury. According to Mike, even the most experienced gun handlers break this rule all the time. They’ll take a gun and start pointing it all over the place while exclaiming, “Ah, sweet bro, this gun is kickass.”

“They don’t even know they’re doing it,” says Mike, “which makes it even more dangerous.”

The safest direction to point a gun is always downrange (as long as there aren’t any people downrange!).

4. Always be sure of your target, backstop, and beyond. You want to be aware of what’s in your line of fire. This isn’t usually a concern if you go to a professional gun range. They make sure that people and property stay out of the path of the guns firing downrange. Where this becomes a concern is when you go shoot with your buddy out on his property.

“Ask your friend what exactly is beyond the target and backstop you’re shooting at, especially when you’re shooting into a wooded area. Don’t just settle for, ‘Oh, don’t worry. There’s nothing back there.’ Ask specifically if there are any houses, property, etc beyond your backstop. Err on the side of being overly cautious,” says Mike.

How to Grip a Handgun

Alright, let’s get down to business. How do you hold a handgun?

For beginners, Mike says a two-handed grip is a must.

1. The gun hand (your dominant hand) should grip the gun high on the back strap (the back strap is the back of the grip on the gun).  This gives you more leverage against the weapon which will help you control recoil when you fire the gun. 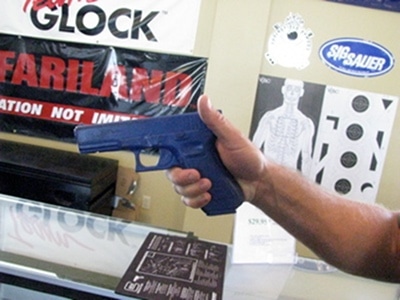 Mike showing how to hold the gun high on the gun’s grip with your gun hand.

2. Place your support hand (your non-dominant hand) so that it is pressed firmly against the exposed portion of the grip not covered by the gun hand. All four fingers of your support hand should be under the trigger guard with the index finger pressed hard underneath it. Here’s Mike demonstrating for us: 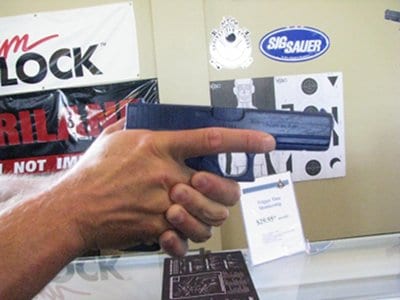 Like you did with your gun hand, you should place your support hand as high as possible on the grip with the thumb pointing forward, roughly below where the slide meets the frame. Look at the back of your hands. There should be a distinct fit, like the fit of a puzzle, with your gun and support hand, like so: 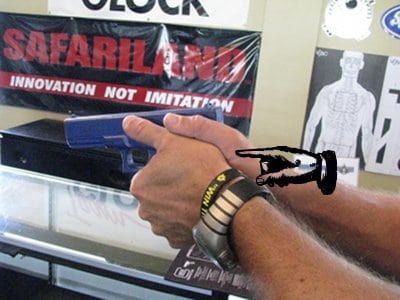 Notice how your hands fit together. Just like a puzzle.

Stand with your feet and hips shoulder width apart. Bend your knees slightly. Mike calls it an “athletic stance.” It allows you to fire the weapon with stability and mobility. Raise the weapon toward your target. Here’s Mike showing us how it’s done: 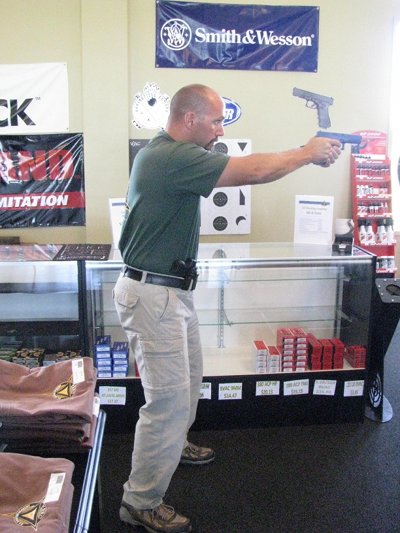 How to Aim a Handgun

Use your dominant eye. You want to aim with your dominant eye. To figure out which of your eyes is the dominant one, perform a quick eye test by forming a one inch circle with your thumb and index finger. Hold the circle at arm’s length. Look at a distant object and look through your circle so that the object appears in the center of it.  Keeping both eyes open, bring your circle toward your face slowly. Your hand will naturally gravitate toward one eye. That’s your dominant eye.

Correct sight picture. The sights are in focus and the target is blurry.

According to Mike, the further away your target is, the greater the need for a clear focus on the front sight.

To fire a gun, we often use the popular phrase “pull the trigger.” However, to fire a gun properly, you don’t actually want to pull the trigger, but rather press it in a controlled fashion so you don’t disrupt your sights. Here’s a brief and very basic rundown on proper trigger control when firing a gun.

And there you go. Now you can go fire a gun at the gun range and look like you know what you’re doing. However, none of the information in this article can replace the instruction and supervision of a professional instructor. If you’ve never fired a gun before, we strongly suggest you visit a firing range and talk to an instructor who will walk you through the process.

Have any other tips for the first time shooter? Share them with us in the comments!

Editor’s note: This article is about how to fire a gun safely and correctly. It is not a debate about gun rights or whether guns are stupid or awesome. If you try bringing up that dead horse around here, your comment will be deleted. I will show no mercy. Keep it on topic, please.