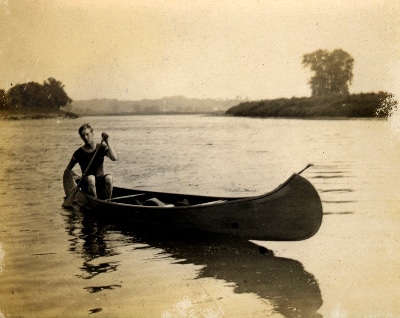 “The movement of a canoe is like a reed in the wind…there is magic in the feel of a paddle and the movement of a canoe, a magic compounded of distance, adventure, solitude, and peace. The way of a canoe is the way of the wilderness, and of a freedom almost forgotten. It is an antidote to insecurity, the open door to waterways of ages past and a way of life with profound and abiding satisfactions. When a man is part of his canoe, he is part of all that canoes have ever known.”

No one is sure who paddled the first canoe.  I think it was some sort of hominid who looked at a cold river, saw a floating log and a stick and thought “why not?”  The next man hollowed out the log, and the next one thought a skin over a frame might be lighter, and so on and so forth until we have the 31 pound carbon-fiber canoe, a translucent Brancusi sculpture.  If the Native people had access to Kevlar and resins, they would have done cartwheels.

There is nothing I love so much as a good canoe.  From my birchbark Algonquin Tciman to my Kevlar ultralights, it doesn’t matter.  I love ‘em all.  So when I talk about canoeing, you need to understand this isn’t my hobby; it’s my life.

There is much manliness in the history and culture of canoeing.  It especially speaks to a man’s need to venture out and explore undiscovered areas.  Without the canoe, much of Canada and the upper United States would not be as it is today.  Lewis and Clark, men among men, were hard-core canoeists.

If you’ve ever heard the call to follow in the footsteps of such men, here are a few things to keep in mind. 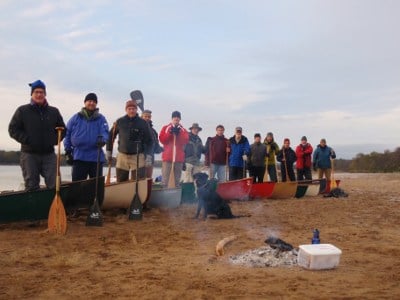 Advice on Getting Into Canoeing


The manly nature of canoeing can lead to some problems.  Let me say this right at the outset: There is a very good chance that you do not know how to paddle a canoe, even if you were a Boy Scout (hell, especially if you were a Boy Scout).  If you’re Canadian, there’s a better chance of it, but for some reason, a lot of men think they instinctively know how to paddle a canoe.  No man thinks he can instinctively ride a mountain bike down a muddy single-track or ski a double black diamond.  If someone does, they’ve probably been removed from the gene pool.

Because of this, men do not seek instruction.  They know enough to be dangerous, and they are sometimes just that.  I’ve fished a lot of men out of a river at the bottom of a rapid they had no business paddling.  Actually, I fish their wives and girlfriends out; the men are on their own.  One of said women once kissed me, murmured a low and intoxicating “thank you,” glared at her boyfriend and walked away, as mad as a wet girlfriend can be.  Last summer I pulled a woman off a log mid-stream, and in so doing asked her where her companion was. “My husband is down there,” she said, pointing a hundred yards downstream, where the less-than-manly man waited in an eddy.  “He’s sleeping on the couch tonight,” I quipped.

First Word of Advice:  Take canoeing lessons. They’re cheap insurance, and your partner will thank you.  I guarantee after half a day, you’ll know more than 99.44% of the population of men.  That means a better experience.  To select an instructor, look for someone certified by a governing body like the American Canoe Association, the Canadian Recreational Canoe Association, or a similar organization in your area of the world.  While lack of certification doesn’t mean a bad teacher, put it this way: just because your Cousin Fred is an avid hang glider doesn’t mean he can teach it.  You don’t want to learn from someone who doesn’t know any more than you do, they just think they do.  The certification process is a significant time commitment.

Let’s assume you take lessons and move past that barrier.  Great! 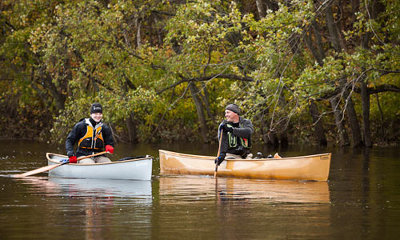 Second Word of Advice:  Paddle solo canoes. No one learns to ride a bike on a tandem bicycle, do they?  One thinks bicycle, not solo bicycle, right?  There’s a weird disconnect here.  Yes, most canoes are tandem canoes, but they are and have been paddled solo for years.  It’s a Canadian thing.  There are instructors who specialize in that style of paddling (me for one).

You will learn a lot faster about proper technique if you paddle solo.  Besides, it’s more manly.  Do it before you paddle with your companion.

Third Word of Advice:  Canoes are sexy. I guess I should clarify; almost all canoes are sexy.  The plastic tub sold at the local hardware store is probably better suited as a cattle feeder than a canoe.  One of these cheap canoes was designed by the shipping department of a large canoe company; they wanted to nest them to keep shipping costs down.  They paddle like they were designed by guys in a warehouse who never paddled their product. 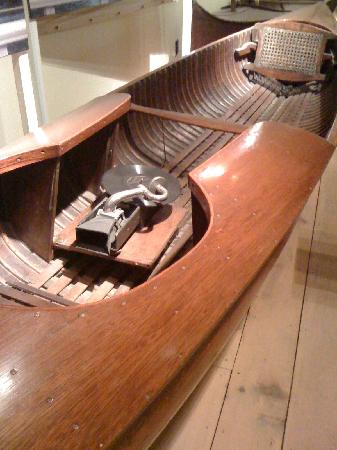 Canoes and courting have a long and somewhat lurid history.  Specialized courting canoes were built in the 1910s and 1920s and were wildly popular in canoe culture.  The Canadian Canoe Museum has a courting canoe with a built-in Victrola. They’re beautiful.  And sexy.  The lady did not paddle, but faced the paddler, often shaded by a parasol.  The center of the canoe was, shall we say, unencumbered.  I’m sure that many children were conceived as the result of a canoe ride into the willows overhanging the banks of a meandering river, inspired by songs like this one from 1916:

I’ve nestled down in limousines and heard love’s whispered pleas, tender, true,
In sailing yachts romantic I have skimmed o’er many seas, ‘Neath skies so blue,
I’ve spooned in cozy corners when the lights were low, And always missed my cue,
It seemed very pretty, but I surely know, There’s no love like the love in my canoe.

Full disclosure here.  I own about a dozen canoes.  It varies from 12 to 14, now that the Marriage Retention / Canoe and Kayak Nonproliferation Treaty of 1988 has lapsed.  We’re both good with it. 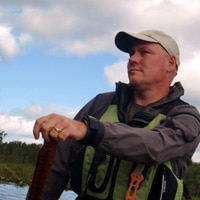