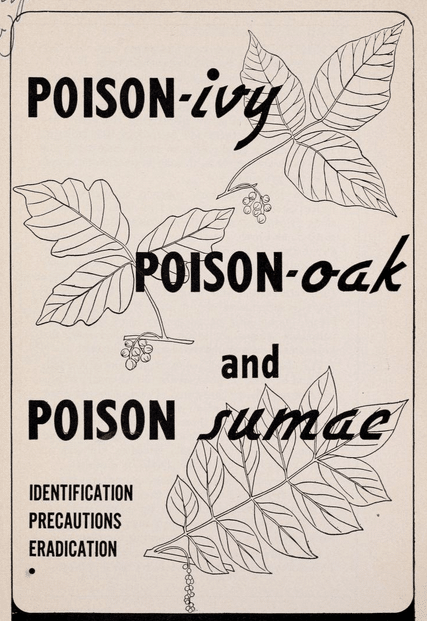 A stroll in the woods is nearly always an enjoyable endeavor; what’s not so enjoyable is discovering a red, itchy rash the next day. Each year, millions of Americans come in contact with poison ivy, poison oak, or poison sumac. While there are numerous other poisonous plants, these three are grouped together because they share a common irritant: an oily resin/sap called urushiol. This resin is potent — it only takes 1 nanogram to cause a reaction. And unfortunately, it coats all parts of these plants.

While some of the characteristics we describe below aren’t necessarily unique to these plants, we’ll get you enough information to avoid these poisonous foes and confidently walk your favorite trails (or create your own!).

The old saying is true: “Leaves of three, let them be!” While there are other plants which have leaf clusters in threes, both poison ivy and poison oak share this trait, making it best to avoid plants with this feature altogether. What you’ll most likely encounter with poison ivy is a stem with a larger leaf at the end, and two smaller leaves shooting off the sides. The leaves can be notched or smooth on the edges, and they have pointed tips. The plant is reddish in the spring, green in summer, and yellow/orange in the fall. It’s not uncommon to see clusters of greenish-white berries on poison ivy through the spring and summer, as well as green/yellow flowers. 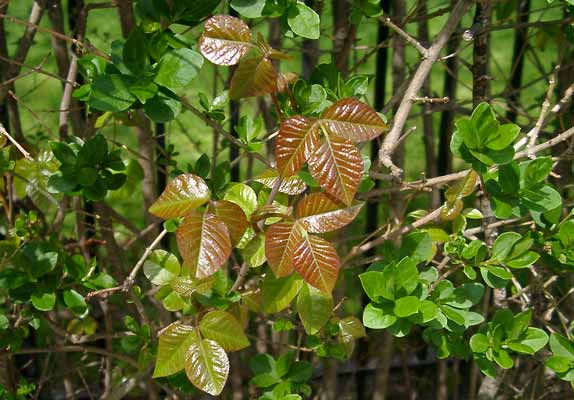 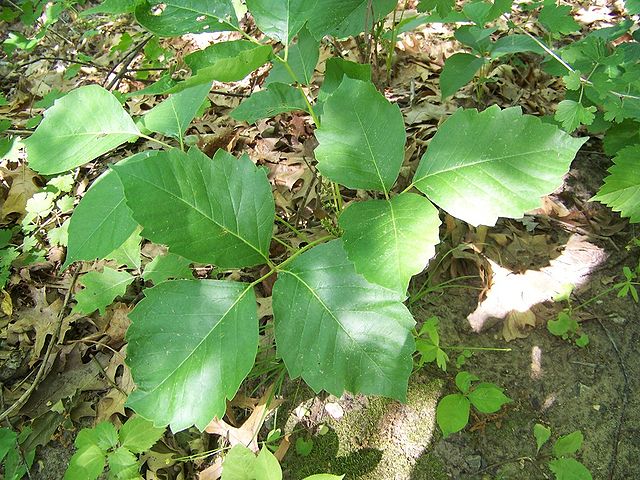 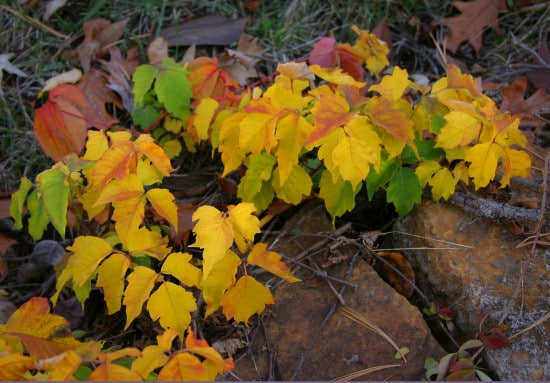 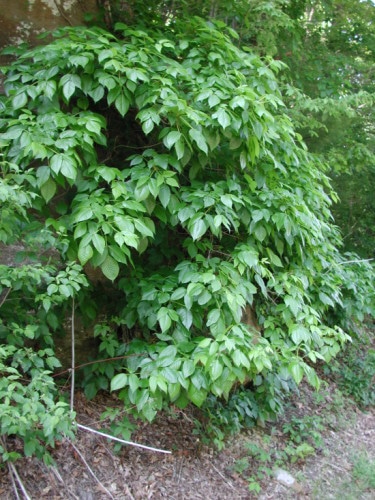 Poison ivy can take the form of a vine or a shrub. The plant’s appearance varies widely based on the region and specific environment where it grows, which is everywhere in the US with the exceptions of Hawaii, Alaska, and parts of the southwest deserts.

Like poison ivy, this plant most often grows leaves in clusters of three, although some varieties display five or seven per cluster. The defining feature is that the leaves have a lobed, wavy appearance (also described as scalloped), similar to oak tree leaves, but more subdued. Another characteristic that sets it apart from poison ivy is that the tips of the leaves are rounded rather than pointed. Its leaves are bright green in spring, turn yellow-green or pink in summer, and finally turn yellow into dark brown in the fall. 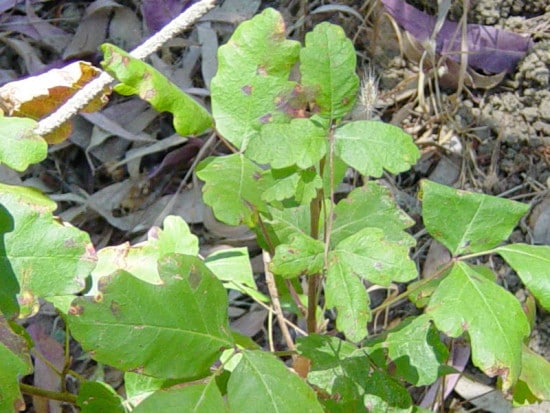 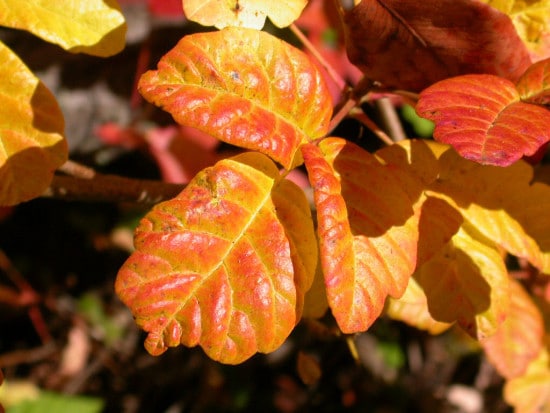 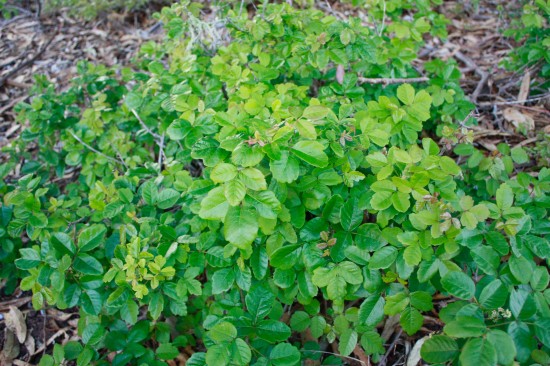 Poison oak is generally a shrub, averaging about 3 feet tall, but shoots of it can also grow as a vine. Not commonly found in the middle part of the U.S., poison oak is primarily situated on the West coast, and the East coast/Southeast.

Poison sumac stems (which are generally red — another of the defining features) have 7-13 leaves, in pairs, with a lone leaf at the end. Leaves are oval, elongated, and smooth-edged, usually 2-4 inches long. They are bright orange in spring, dark green in summer, and red-orange in fall. 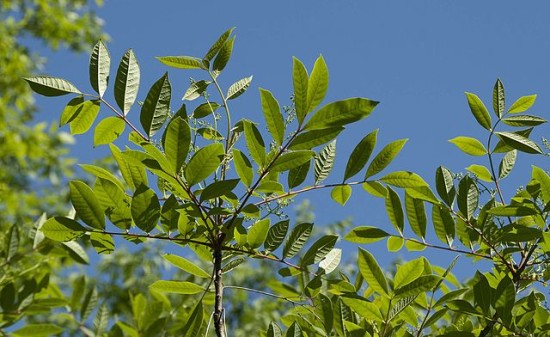 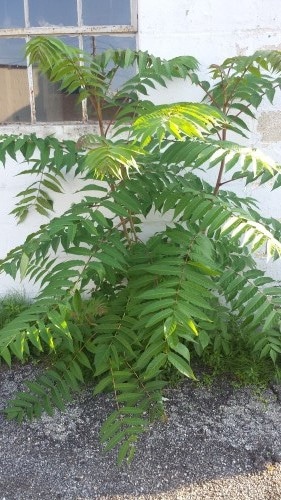 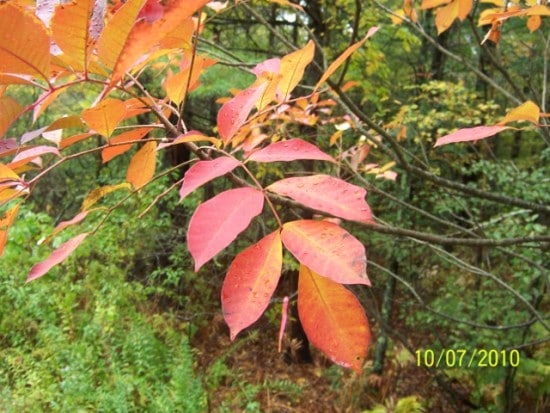 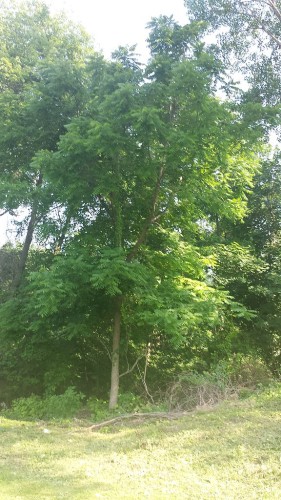 Poison sumac thrives in watery, swampy environs, present mostly in the Midwest and Southeastern U.S., where high humidity is common. It grows as a tree or tall shrub, 5-20 feet tall.

An allergic reaction to poison ivy, oak, or sumac can occur when your skin makes direct contact with the plant, when you touch something that has been in contact with the plant, and even when the plant is burned, as particles of urushiol can make their way into your eyes, nose, and throat. Urushiol is very sticky and tenacious, so it easily adheres to firewood, dog fur, and gardening tools, and then transfers itself to your skin once you lift, pet, and pick up these things. Because urushiol is present in the plants’ roots, stems, and leaves, it remains potentially poisonous even in the wintertime.

Anyone can get an allergic reaction if exposed to urushiol in a large enough dose. But some folks are more sensitive than others. About 85% of the population is fairly to extremely susceptible to getting an allergic reaction, while 15% of lucky folks are resistant to reaction. One’s sensitivity/resistance is thought to be largely genetic in origin, so if your parents have had severe reactions to poisonous plants, take extra care to avoid contact yourself.

Sometimes you only get a rash after being exposed to the plant numerous times. So don’t automatically assume that you’re resistant because you touched poison ivy/oak/sumac once, and didn’t get a rash.

On the other hand, sensitivity to these poisonous plants can lessen over time. So if you had a bad reaction as a child, you may have developed more resistance over the years.

How to Treat a Rash From Poison Ivy, Oak, or Sumac

If you know you’ve touched one of these poisonous plants, you have about 10 minutes before the sap penetrates the lower layers of your skin and binds to its cells, at which point an allergic reaction will set in. So you can head off this reaction by immediately rinsing the exposed area with running water. Use a mild detergent soap if you have it; fatty soaps can spread the urushiol oil, creating a worse reaction. Rinsing with rubbing alcohol is also effective. If wipes are all you have to clean the area, that’s better than nothing.

If you don’t wash off the resin in time, and you’re sensitive to ivy/oak/sumac, then a rash will develop. Rashes from all three of these plants appear in the same form and are treated in the same way since the irritating agent in all of them is urushiol. If you’ve been outdoors and have the following symptoms appear, you may have a rash from one of these plants:

These are the primary symptoms, and they generally appear within 12-72 hours of contact. Luckily, if the rash isn’t severe, it can be treated at home without having to see a dermatologist.

The American Academy of Dermatology recommends the following treatment plan:

The rash should heal in about 1-2 weeks. Though it may look gross, it’s not contagious. If the rash is particularly large or painful, or doesn’t heal in that timeframe, it’s best to see a dermatologist who may prescribe a round of oral steroids or other treatments.

Above all, wearing long clothing when you go out is recommended — especially pants to guard against brushing these plants while wandering around. Be sure to wash these clothes right when you get home.

You’re now equipped to head out to the woods and avoid these itchy fiends!