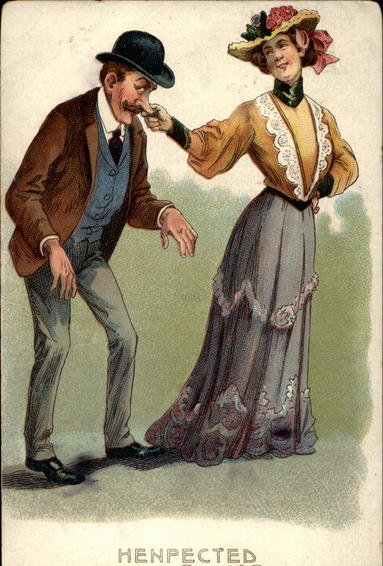 Editor’s note: This is a guest post from Wayne M. Levine, M.A.

No one wants to admit they’re not funny. Have you ever met a man who willingly confesses to it? Now, you know he’s not terribly funny, and everyone else can clearly see that he’s not funny. But he still cracks his bad jokes as you all groan. In the end, though, there’s usually little harm done as a result of his state of denial.

Now, how many men will admit to needing the approval of women? Have you met many? As men get older, and they’ve suffered long enough, they’ll start to admit it and work toward change. But what about your buddies? Have you seen them shackled by this need for approval? What about you? Have you had the courage to honestly take stock and see where your need for approval is preventing you from being the man you want to be? Ready to stop denying and start growing up?

First, let’s define approval as it relates to our relationships with women. Approval is her permission for you to take an action. Approval is her acknowledgment that she won’t take you to task for your choice…maybe. Approval is giving away your power to do as you see fit. In other words, needing the approval of women makes you a pleaser.

Stick around for a moment and you’ll learn how curing yourself of this tendency to please will actually allow you to be happier in your own skin, be more respectful, be more respected, be a better partner, more compassionate, more present, a better example to your kids, and be more of the man she actually wants you to be.

Where Did It Start?

Where does this need for the approval of women come from? As with most of our emotional, psychological, and relationship challenges, the seeds were planted a long time ago in a galaxy, seemingly far, far away…your childhood.

What, precisely, did you see and you learn? How did your father, or lack of dad, mold you? What did you learn about how a man behaves with a woman? If you’re a man who currently seeks the approval of women, you probably learned it from dad. Either he demonstrated the same behaviors, or he was just the opposite (neglectful, abusive, etc.) In this case, perhaps you learned how to behave differently with your mom so that she wouldn’t take her anger and unhappiness out on the other man in the house, you. You learned how to survive, to avoid pain. It was a good thing. You coped. But now you’re stuck in that behavior while your circumstances have probably changed considerably.

Now you’re a man. You fear confrontation. It’s intolerable for her to be upset with you. You’ll go to almost any length—and you have—to please her, to make your discomfort disappear…for the moment. Sound familiar?

What exactly is it that you do to protect yourself from her displeasure? You send up trial balloons to see if you can get a tentative approval by tentatively suggesting a tentative idea you had. You edit yourself and avoid saying or doing what you know will provoke her. You spend an inordinate amount of time and energy concerned about how she feels and how she’ll react. You’ve been rationalizing, compromising, second-guessing, playing it safe, and avoiding confrontation. As a result, you’ve slowly forgotten what really matters to you, what you were once passionate about, how you truly feel about issues, yourself, and others. Meanwhile, if you’re a dad, you’re passing this all onto the next generation—your legacy.

Now, let’s take a step back in time. When you first met her, none of this was seemingly a problem. You were “in love.” It was easy to dismiss little issues. After all, you’re a master of denial. And, you were, hopefully getting laid all the time. Life was good.

But then things began to change, or was it her? You found yourself less happy, more irritable, frustrated. You agreed to see your buddies less often back in the day. Why? To please her. But now your buddies are calling you “whipped.” They’ve lost respect for you, while you’ve lost respect for yourself. In addition you’re probably a bit lonely, angry, and now blaming her.

What to do next.

Now what are you supposed to do? How do you change course after all these years? You’ve thought about these things many times. But you can’t, for the life of you, imagine how anything you do could lead to a better relationship with her. After all, you know her and you know how she is. Things won’t change. Not true. When YOU change, it all changes. Will she still want to be around when you’ve made the change? Too soon to tell. But really, if you want to be happy, confident, proud, successful, if you want to be a great man, father and husband, do you really have a choice but to change?

Let me suggest a few action items. There’s a level of awareness you need to achieve, while you take steps to change your behavior. Although the process can feel overwhelming, all I can tell you is that many men have succeeded in becoming better men starting at the same spot you find yourself in today.

Pleasers are not known for their risk-taking. For some, a risk might include jumping out of an airplane. Skydiving may seem like a cakewalk to a pleaser compared to, let’s say, letting your wife know exactly how you’d like to handle the discipline the next time your son is disrespectful. Or, making reservations for a restaurant you’d really like to go to and then taking care of your woman without worrying whether she’ll approve of your choice.

Ever been in the presence of an extremely confident man? You know almost immediately when he’s entered the room. Everyone does. The energy he’s putting out is palpable, and it’s affecting those around him. People respond subconsciously to that energy.

As a pleaser, you emit your own kind energy. Again, those around you respond to it. That’s why you often don’t have a voice—you’re too busy accommodating those who have pegged you as someone who will satisfy their needs. That’s why it’s critical for you to begin to consciously choose a new path.

Your context is where you’re coming from as you enter the room, begin a discussion, plan an event, or go out on a date. Imagine yourself wearing a sandwich board with your context written on it for the world to see. Because that’s how obvious it is, already, to everyone who meets you. This is your mantra, this is your attitude, this is the man you want to be in that very moment.

Let’s say your woman asked you to pick up something from the store for dinner. Try as you might, you couldn’t find the exact item. So, you bought something close. Your current context as you arrive home might sound like this: I hope she doesn’t give me a hard time. A better context would be: Dinner is going to be great and I love you. Hear the difference? This attitude will change the way you walk into the house, the way you give her the alternative item, the way you’ll respond to her criticism, the way you’ll continue to be the man you want to be for the entire night. Rather than having your tail between your legs, you’ll have let it go. Instead of worrying about not pleasing her, you’re available to be the dad you want to be with the kids, or simply present with her in a more confident, attractive way.

Even if she’s unable to let go of her disappointment, it is vital for you to maintain your context. Ultimately, your new attitude has the potential to change how she responds to you. Depending on the state of your relationship, this could take some time. But for many, the change could take place quite quickly. There are a lot of women out there who are desperately waiting for their men to show up as men. You may be surprised to find that you’re with one of these wonderful, patient women right now.

Don’t do this alone.

To successfully make changes in your behavior, you’ll want the support of other men. Whether it’s a buddy, men’s group or counselor, support is essential. That support includes being held accountable to your commitments. You’ll want to have specific goals, and you’ll want to have your ass kicked when it’s difficult and you want to quit. And you’ll enjoy receiving a pat on the back when you’ve hit a homerun.

In becoming this new man, you’re asking a lot of yourself, and of those closest to you. It’s not an easy process. Prepare by having your support network in place. That’s how you’ll set yourself up for success, rather than failure.

We’ve been discussing your need for the approval of women. But this issue goes beyond women. You care too much about how everyone thinks about you, maybe even strangers. You’re a pleaser in all areas of your life. You may disagree. But take the time to examine how you really show up at work, with your extended family, or with your friends. Are you really making your own choices? Or have you adapted for so long, you’ve forgotten what being you would even look like?

Once you become more masculine in your relationship with women—and lose the need for their approval—you’ll begin to see how this new man has a place in all areas of your life. And it’s not about pissing off people. You don’t have to be inconsiderate to be the man you want to be, to stop being a pleaser, though some people around you may feel you’re being a jerk. That’s to be expected. You’re changing the game on them. No one likes that, especially insecure (and therefore controlling) people, like, perhaps, your wife. This is simply about finding your voice, telling the truth, considering other people’s needs and feelings, but not at the expense of honoring your own.

At the end of the day, remember this: You can’t ask for permission to be the man you want to be. Throughout this process with your woman, continue to honor and cherish her. Not being a pleaser doesn’t excuse you from your responsibilities. You still need to listen, not argue, and run the sex and romance departments. And believe me, when you stop being a pleaser in bed, she’ll REALLY be pleased.

Wayne M. Levine, M.A., mentors men to be better men, husbands and fathers. Check out Wayne’s book, Hold On to Your N.U.T.s—The Relationship Manual for Men.