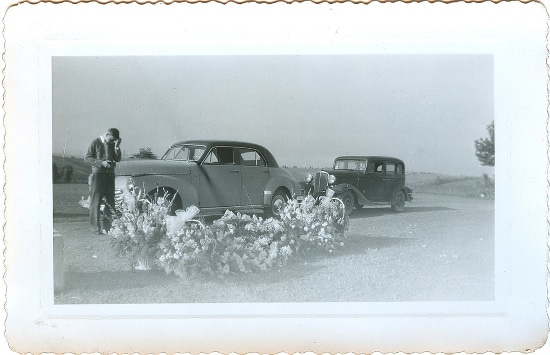 Editor’s Note: The following is an excerpt from Keys to Happiness, an anthology of articles published in 1954.

“How to Help Someone in Sorrow”
By Howard Whitman

Most of us want to be helpful when grief strikes a friend, but often we don’t know how. We may end up doing nothing because we don’t know the right — and helpful — things to say and do. Because that was my own experience recently, I resolved to gather pointers which might be useful to others as well as myself.

Ministers, priests, and rabbis deal with such situations every day. I went to scores of them, of all faiths, in all parts of the country.

Here are some specific suggestions they made:

1. Don’t try to “buck them up.” This surprised me when the Rev. Arthur E. Wilson of Providence, RI mentioned it. But the others concurred. It only makes your friend feel worse when you say, “Come now, buck up. Don’t take it so hard.”

A man who has lost his wife must take it hard (if he loved her). “Bucking him up” sounds as though you are minimizing his loss. But the honest attitude, “Yes, it’s tough, and I sure know it is,” makes your friend feel free to express grief and recover from it. The “don’t take it so hard” approach deprives him of the natural emotion of grief.

2. Don’t try to divert them. Rabbi Martin B. Ryback of Norwalk, Conn., pointed out that many people making condolence calls purposely veer away from the subject. They make small talk about football, fishing, the weather — anything but the reason for their visit.

The rabbi calls this “trying to camouflage death.” The task of the mourner, difficult as it is, is to face the fact of death, and go on from there. “It would be far better,” Rabbi Ryback suggested, “to sit silently and say nothing than to make obvious attempts to distract. The sorrowing friend sees through the effort to divert him. When the visitor leaves, reality hits him all the harder.”

3. Don’t be afraid to talk about the person who has passed away. Well-intentioned friends often shy away from mentioning the deceased. The implication is that the whole thing is too terrible to mention.

“The helpful thing,” advised Rabbi Henry E. Kagan of Mount Vernon, N.Y., “is to talk about the person as you knew him in the fullness of life, to recreate a living picture to replace the picture of death.”

Once Rabbi Kagan called on a woman who had lost her brother. “I didn’t know your brother too well,” he said. “Tell me about him.” The woman started talking and they discussed her brother for an hour. Afterward she said, “I feel relieved now for the first time since he died.”

4. Don’t be afraid of causing tears. When a good friend of mine lost a child I said something which made his eyes fill up. “I put my foot in it,” I said, in relating the incident to the Rev. D. Russell Hetsler of Brazil, Ind. “No, you didn’t,” he replied. “You helped your friend to express grief in a normal, healthy way. That is far better than to stifle grief when friends are present, only to have it descend more crushingly when one is all alone.”

Fear of causing tears, probably more than anything else, makes people stiff and ineffective. Visiting a friend who has lost his wife, they may be about to mention a ride in the country when they remember the man’s wife used to love rides in the country. They don’t dare speak of peonies because they were her favorite flower. So they freeze up.

“They really are depriving their friend of probably the greatest help they could give him,” Pastor Hetsler commented. “That is, to help him experience grief in a normal way and get over it.” Medical and psychological studies back up the pastor’s contention that expressing grief is good and repressing it is bad. “If a comment of yours brings tears,” he concluded, “remember — they are healthy tears.”

If the warmth of your presence can get your friend to start talking, keep quiet and listen — even though he repeats the same things a dozen times. He is not telling you news but expressing feelings that need repetition. Pastor Swartsfager suggested a measuring stick for the success of your visit: “If your friend said a hundred words to your one, you’ve helped a lot.”

6. Reassure — don’t argue. “Everybody who loses a loved one has guilt feelings — they may not be justified but they’re natural,” Rabbi Joseph R. Narot of Miami pointed out. A husband feels he should have been more considerate of his wife; a parent feels he should have spent more time with his child; a wife feels she should have made fewer demands on her husband. The yearning, “If only I had not done this, or done that — if only I had a chance to do it now,” is a hallmark of grieving.

These feelings must work their way out. You can give reassurance. Your friend must slowly come to the realization that he or she was, in all probability, a pretty good husband, wife, or parent.

7. Communicate — don’t isolate. Too often a person who has lost a loved one is overwhelmed with visitors for a week or so; then the house is empty. Even good friends sometimes stay away, believing that people in sorrow “like to be alone.”

“That’s the ‘silent treatment,’” remarked Father Thomas Bresnahan of Detroit. “There’s nothing worse.” Our friend has not only lost his loved one — he has lost us too.

It is in the after-period, when all the letters of sympathy have been read and acknowledged and people have swung back into daily routine, that friends are needed most.

Keep in touch, Father Bresnahan urges. See your friends more often than you did before. See him for any purpose — for lunch, for a drive in the country, for shopping, for an evening visit. He has suffered a deep loss. Your job is to show him, by implication, how much he still has left. Your being with him is a proof to him that he still has resources.

8. Perform some concrete act. The Rev. William B. Ayers of Wollaston, MA told me of a sorrowing husband who lost all interest in food until a friend brought over his favorite dish and simply left it there at suppertime. “That’s a wonderful way to help, by a concrete deed which in itself may be small yet carried the immense implication that you care,” Pastor Ayers declared.

We should make it our business, when a friend is in sorrow, to do at least one practical, tangible act of kindness. Here are some to choose from: run errands with your car, take the children to school, bring in a meal, do the dishes, make necessary phone calls, pick up mail at the office, help acknowledge condolence notes, shop for the groceries.

9. Swing into action. Action is the symbol of going on living.

By swinging into action with your friend, whether at his hobby or his work, you help build a bridge into the future. Perhaps it means painting the garage with him, or hoeing the garden

In St. Paul, Minn., the Rev. J.T. Morrow told me of a man who had lost a son. The man’s hobby had been refinishing furniture. When he called on him, Pastor Morrow said, “Come on, let’s go down to the basement.” They sanded a table together. When Pastor Morrow left, the man said, “This is the first time I’ve felt I could go on living.”

Sorrowing people, Pastor Morrow pointed out, tend to drop out of things. They’re a little like the rider who has been thrown from a horse. If they are to ride again, better get them back on the horse quickly.

Grief runs a natural course. It will pass. But if there is only a vacuum behind it, self-pity will rush to fill it. To help your friend along the normal course of recovery, guide him to a new interest.

Volunteer work for charity, enrollment in a community group to help youngsters, committee work at church or temple are ways of getting people “out of themselves.”

If you and I, when sorrow strikes our friends, follow even a few of these pointers, we will be helpful.