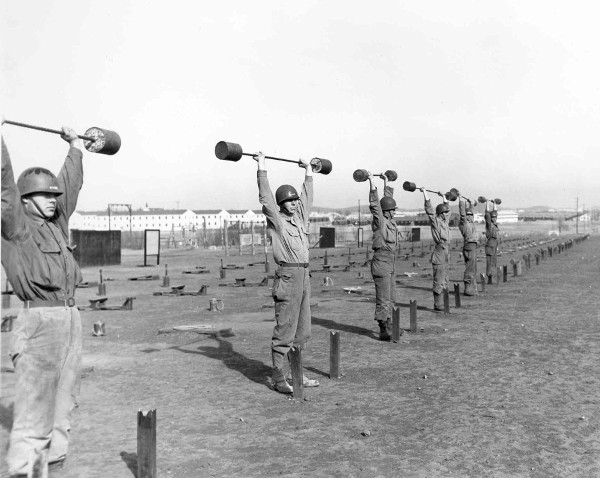 Editor’s note: This week we’re publishing excerpts from FM 21-20, an Army field manual from 1946 that includes the physical training program used by GIs during WWII. You can read the story behind FM 21-20 here. This series may offer you practical suggestions on exercises to incorporate into your own workouts, or simply inspire you to get in shape and embody the kind of strength and fitness that would make your grandpa proud!

Today’s workout consist of a circuit training routine. What’s great about it is that it encourages the use of improvised, jerry-rigged equipment — like a barbell and warrior mace made from concrete-filled tin cans. As the manual states: ‘The lack of facilities and equipment should not serve as an excuse for a narrow, restricted program…the lack of facilities and equipment should serve as a challenge to procure them in some manner.” 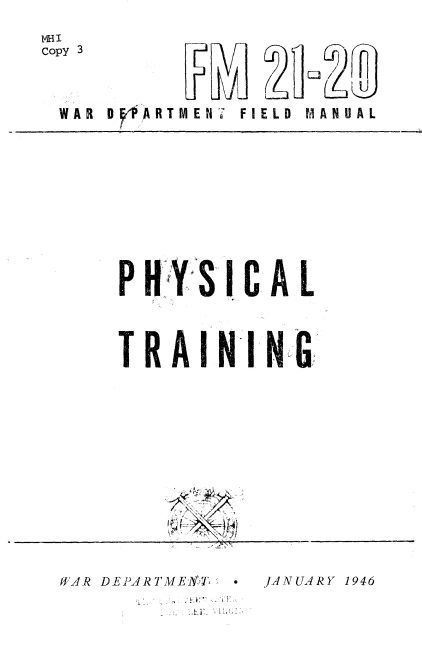 
GENERAL. The strength course is an effective method of organizing a variety of conditioning exercises. Such a course consists of a number of events or stations, the facilities for which are duplicated so that a number of men may participate in each event simultaneously. The men rotate from event to event upon a signal.

USE OF STRENGTH COURSE.

b. The procedure is for the men to double time to the proper area and spend three minutes warming up. They then participate in the activities scheduled for the day for 28 minutes after which they assemble for a run, usually for a distance of a mile. The run is usually double time in formation though it is sometimes changed to some other form of running such as obstacle course or sprint running, grass drills and the like. The run, which is done every day, completes the physical training period.

a. The number and type of events in the strength course may vary. In the course described here, there are seven stations for each man to cover in succession. Each man rotates to each station twice, making a total of 14 stations. He spends two minutes at each station performing the prescribed exercises. At the proper signal the men at station 7 move to station 1; those at station 1 move to station 2; those at station 2 to station 3, and so on. Approximately 28 minutes are given to the whole routine. Time will be conserved in moving from event to event if the course is laid out in a circle. If sufficient equipment for nine men is available at each station, the course will accommodate 63 men.

b. Several instructors carefully supervise the men to see that they perform the activities properly and that they work hard and continuously. Men work until they achieve the required number of repetitions, or until the command to change stations is given. The severity of the strength course varies with the number of repetitions required for its individual events.

a. Posture exercises. At one station in each row emphasis is devoted to developing good posture in all men. A posture chart similar to that in Chapter 16, but enlarged until the figures are about 3 to 4 feet high, is erected in front of them. The men look at the illustration of the best posture, and try to assume that posture for about a minute. They then begin to perform the exercise prescribed for that day for the strengthening of postural muscles. These exercises are continued until the men move up to the next station. 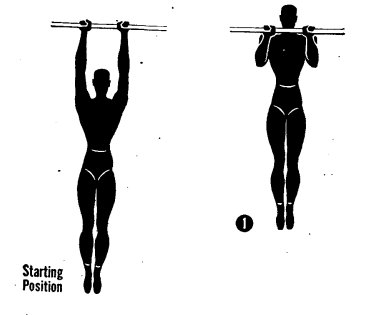 The apparatus at this station is a horizontal bar which is from 7 feet, 9 inches to 8 feet high. There should be a cleat on the side of one upright to aid short men to get up to the bar. One bar, if at least 6 feet long will serve two men. The first thing a man tries when he reaches this station is to do as many pullups as possible. He should increase this number one each successive week. After finishing the pullups, he rests, not over 20 seconds. Then he hangs on the bar and tries to raise his legs until his toes touch the bar between his hands. If he is unable to get that high, he raises his legs as high as possible. He should do this at least 5 repetitions to begin with. The number of repetitions should be increased two each week. 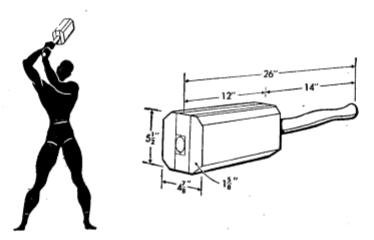 This apparatus is a club with a handle. It should weigh about 20 pounds. It may be made from a fruit can filled with concrete and a handle of any convenient wood. Or it can be fashioned entirely from wood. This club is swung violently from right to left and left to right; from over one shoulder to down by the ground on the other side, in a chopping motion; or swung around the head, one hand at a time. Other movements, devised by the men or by the instructor may be substituted. The club should be swung continuously from the time this station is reached until the man progresses to the next station.

d. Situps. This event can be accomplished in one of three ways:

(1) Without equipment. If no equipment is available at first, the man can either lie on the ground (if it is not wet), or on his raincoat. He then does situps as in the Physical Fitness Tests. A device to hold the feet down will be necessary. 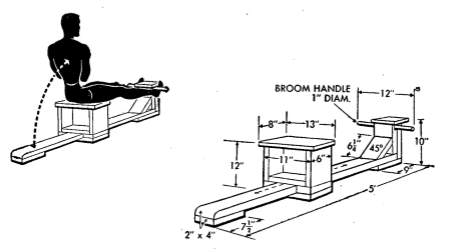 (2) Roman chair. This is a sliding seat on a framework, where the forward end has a bar to hold the feet down. The man sits on the seat, adjusted for his length of legs; lies back; and sits up. He can hold his arms by his sides or behind his head, according to his strength. The man does as many situps as he can continuously, or until the shift to the next station is called. 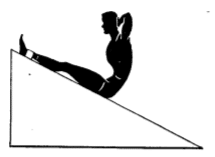 (3) Slanting plane. This is a board about 18 inches wide. One end is elevated by a framework which causes the board to form a 35° to 40° angle to the ground. There is a heavy strap at the higher end of the board under which to slip the feet. The man lies on his back and slips his feet under the strap. Then he does as many situps as possible. He keeps his hands by his sides or behind his head. 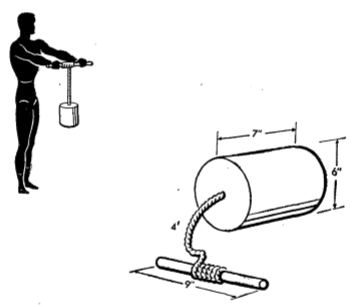 This event provides excellent exercise for the hands, wrists, and fronts of shoulders. The equipment is made of a No. 10 can filled with concrete and attached to a sash cord 4 feet long. The other end of the rope is attached to the middle of a handle. The man holds his arms forward, and winds up the weight on the cord by twisting the handle backward, until it is wound. When the cord is completely wound on the handle, he unwinds the cord slowly, releasing one hand at a time. Then he winds the cord up again, this time twisting forward. He repeats as many times as possible before ordered to proceed to the next station. 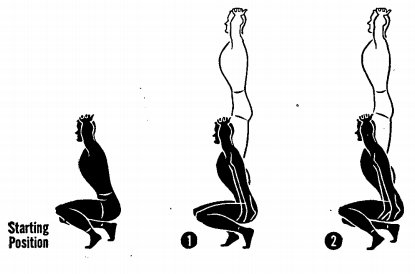 f. Squat jumps. A platform of wood is provided so that squat jumps can be done when it is muddy. The exercise is performed as in the Physical Fitness Tests. The men should start with 16 jumps and increase the number two each week. Where the men are getting adequate leg exercise elsewhere, rope skipping may be substituted for squat jumps. The rope skipping should be continuous. The men should attempt to master the technique of “crosses” (skipping rope and crossing the arms in front of the chest on every other swing) and “doubles” (passing the rope twice under the feet on each jump). These exercises are much more vigorous than simple rope skipping.

The barbells are made from 1 to 1.5 inch iron pipe, and two No. 10 cans filled with cement. They should weigh about 40 to 60 pounds. The bells are placed in a row. The heavier bells are on the left hand end of the row, and the lighter ones on the right. The larger men should be placed in the rows with the heavier weights. Any strenuous barbell exercise may be used, but the following are recommended: 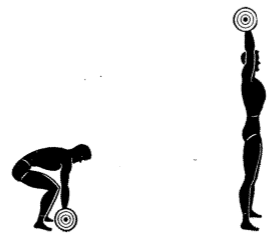 Stand close to the bar with feet 12 to 18 inches apart and straight ahead. Bend forward with back straight as possible and grasp the bar, palms down, with arms parallel. Lift the weight slowly until it is fully overhead, inhaling on the upward movement. Then exhaling, lower the bell slowly to the ground. Repeat as many times as possible up to 20. Keep back straight throughout. 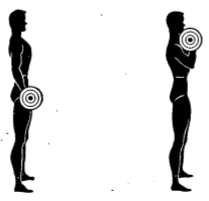 Standing erect, hold bell in front of the hips, keeping arms parallel and palms forward. The chest should be arched. The elbows remain at the sides. Flex elbows, and lift weight until bar touches the upper chest. Inhale with the upward movement, and exhale with the downward movement. Repeat this as many times as possible up to 20. 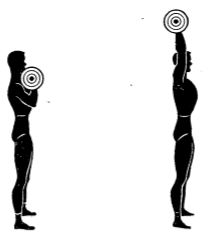 Hold bell in front of the upper chest and stand in good posture. Keep palms forward. Inhaling, press the bell upward to the overhead position. Keep trunk erect, and press bell upward and slightly backward over the crown of the head. Then lower the bell slowly to the starting position, exhaling. Repeat as many times as possible up to 20. 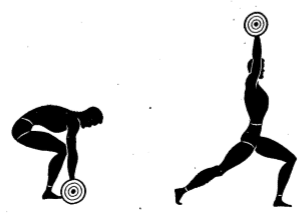 Stand close to and grasping the bar with feet 12 to 18 inches apart and straight ahead. Pull barbell upward to the overhead position in one motion. At the same time, split the left foot forward and the right foot backward to a lunge position. The movement is almost like a dropping under the bell. Inhale as the bell goes up. Then recover the rear foot forward to the front foot, and return the bell to the ground in two movements: first to the top of the chest, and then to the ground. Alternate the feet. Repeat as many times as possible up to 20.