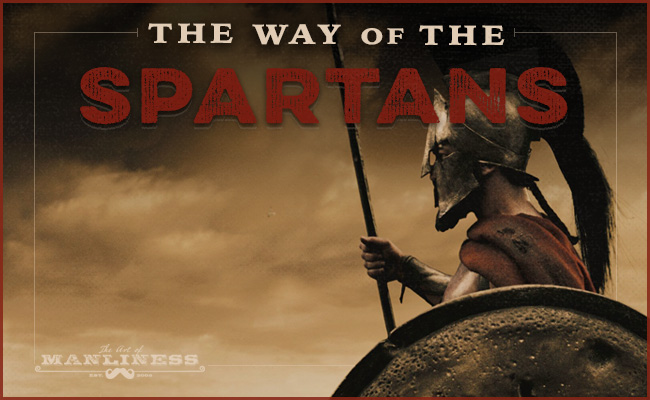 To some, the Spartans represent the ultimate warriors — fierce, fearless, liberty-loving, physically-ripped superhero-esque figures. The epitome of rough and ready virility.

To others, the Spartans are a repugnant people — brutish, cruel, one-dimensional proto-totalitarians. Holders of slaves, exacters of infanticide, practitioners of pederasty.

Neither view captures the complexities — not to say conflicting accounts — of the city-state known anciently as Lacedaemon.

Courageous warriors? Surely the Spartan reputation for martial prowess was well-earned. But the Spartan warrior did not fight in the way we most often idealize — in single combat, for individual glory — but rather subsumed as one cooperative member of a larger phalanx.

Nor was the Spartan man a one-trick pony, possessed solely of martial skill and knowledge. Rather, he was an aristocratic gentleman, schooled not only in war, but in music, singing, dance, rhetoric, logic, philosophy, and disciplined comportment as well. He was a literate lover of both sports and poetry, physical sparring and oral repartee. As opposed to the image of a barren, artistically and intellectually austere culture, the philosopher Sphaerus asserted that “no one was more devoted to music and song,” Spartan dance and choral festivals attracted visitors from near and far, and Socrates argued that “The most ancient and fertile homes of philosophy among the Greeks are Crete and Sparta.”

When it comes to slavery, infanticide, and pederasty, the evidence is conflicting as to the exact nature and extent to which these customs were practiced. The Spartans did subjugate the Messenians but they were more like medieval serfs than slaves and enjoyed many more privileges than did those held in other parts of ancient Greece; for this reason thousands of slaves from Athens fled to Sparta for better treatment. It is said that the Spartans killed babies deemed unfit to live by exposing them or throwing them off Mt. Taygetus, but the remains of no infants have been found there, and however and wherever infanticide did take place, it was hardly unique to Sparta but practiced in Athens and other city-states as well. As to pederasty, there are certainly sources that attest to its practice, but also those — like the account of the Athenian historian Xenophon, who is the only source from that period with firsthand experience of the agoge (the Spartan system for training the young) and enrolled his own sons in this school — who deny it took place. Whatever the extent of those practices of this ancient culture we find abhorrent in the modern day, they can only be fully understood, if not justified, by the singular focus the Spartans placed on creating an indomitable society of warriors, and the fact that much of the polis’ culture was structured around, and subordinated to, this aim.

As to what kind of state Sparta was, even ancient observers couldn’t decide if its government could better be described as a monarchy, a democracy, or an oligarchy. As Spartan scholar Paul Rahe observes, “Lacedaemon was, in fact, all and none of the above.” Even to describe the Spartan polis (and its neighbors) as a state is to misunderstand it, for “In antiquity, there was no Greek state. The ancient Hellenic republic was, as James Madison would later observe, ‘a pure democracy . . . a society consisting of a small number of citizens, who assemble and administer the government in person.’ The polis really was, as the Greeks often remarked, the men.”

We should not be surprised that multiple and sometimes conflicting views of Sparta exist — the actual records of this people are thinner and patchier than is often realized. Much of what is known originates in sources biased one way or the other — from either champions or enemies of the city-state — and is relatively small in size; the Spartans were a highly secretive people, constricting the travel of its citizens abroad, and the visitation of foreigners at home (indeed, this secrecy is part of what made Sparta compelling in its own time, and continues to draw our interest today). As Rahe observes, “It would not be hyperbole to appropriate for Sparta Winston Churchill’s famous description of Russia: Lacedaemon was in antiquity and remains today a riddle wrapped in a mystery inside an enigma.”

What we can know for certain is that Spartans lived a truly unique way of life. As Rahe puts it: “Classical Lacedaemon was no ordinary polis. No one thought so in antiquity; no one should think so today.”

We know too that many contemporaries of the city-state, as well as plenty of eminent observers in the centuries since, were ardent admirers of this distinctive way of life.

The philosopher Plato said that the culture of Lacedaemon had a tendency to give one an inferiority complex: “To look at the temperance and orderliness, the facility and placidity, the magnanimity and discipline, the courage and endurance, and the toil-loving, success-loving, honor-loving spirit of the Spartans, you would count yourself but a child.”

Plato was hardly the only ancient to admire Sparta from afar. Foreign visitors, including teachers like Libanius and statesmen like Cicero, came from all corners of civilization to see for themselves the legendary agoge and even, like Xenophon, enrolled their own sons in the program and made significant financial donations to it.

For centuries after its decline, Sparta continued to be venerated as a polis uncorrupted by luxury and commerce, as a model of the virtues of simplicity, precision, self-sacrifice, martial vigor, mental fortitude, and physical stamina, and as an inspiration for a balanced, mixed government. In drawing up the American constitution, the Founding Fathers found inspiration in what Thomas Jefferson called “the rule of military monks,” while Samuel Adams hoped the new republic would become a “Christian Sparta.”

If these “Laconophiles” overly idealized the Spartan city-state, it’s still worth considering what it was that drew their praise. If the details of the Spartan way of life are sometimes in dispute, or embellished, they still point to underlying principles — values and lessons we can’t and wouldn’t want to exactly replicate today, but which nonetheless impart insights on how to better live our lives. As Rahe observes:

“we may prefer the Athenians, regarding them as more like ourselves, and we may well be right not only in that judgment but in our moral and political preferences as well. Our predilections notwithstanding, however, we name sports teams after the Spartans, and it is about them (and not the Athenians) that we ordinarily write novels and make films—which says a great deal about the ancient Lacedaemonians and perhaps also something about the unsatisfied longings that lurk just below the surface within modern bourgeois societies.”

A city the Roman historian Livy called “memorable not for the magnificence of its buildings, but for its discipline”; protected by what the mythical founder of its military described as a “wall of men, instead of bricks”; populated by those who considered themselves the descendants of “Heracles the unconquered” — a tiny warrior community that managed to command the respect of its neighbors and leave a legend for all time — undoubtedly has much to teach about the nature of these longings, and how they might be fulfilled, at least slightly, in the present age.

In three subsequent installments, we’ll look at what lessons the ancient Spartans can offer modern men.