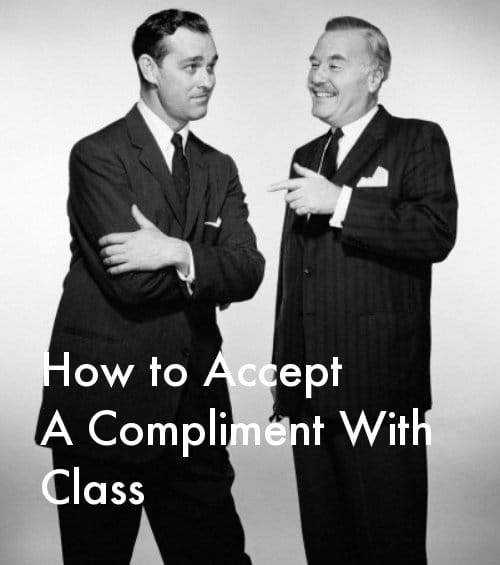 You hand someone a gift and they eagerly tear off the wrapping paper and lift the lid on the box. But as they pick up and examine the present tucked inside, their smile quickly fades. “You know, this watch really isn’t right for me. Here, you can have it back.”

Ouch. Such behavior is so uncommon you may (thankfully) never have witnessed it or done it yourself. Yet the majority of us regularly do something very similar when it comes to accepting another kind of “gift”: compliments.

Even though we should all be offering more compliments, many of us struggle to do so. And yet graciously accepting compliments can be a challenge as well. We’re eager to get them and so pleased when we do, but then we utterly fumble their receipt. Instead of accepting compliments with pleasure and appreciation, we look for ways to downgrade, reject, and deflect their significance and value.

Learning how to best take a compliment is pretty easy (even if changing an ingrained behavior takes some practice). You simply have to understand 1) how you dismiss compliments, 2) why you have trouble accepting them outright, and 3) why and how you can graciously acknowledge and accept the praise of others.

Sociolinguists place compliment responses into 3 main categories: Accept, Deflect, and Reject. These categories represent a spectrum, and most people aren’t comfortable at either extreme; outright denial seems rude, but full acceptance feels conceited. Thus, most people seek what seems like a safe middle ground, choosing a deflecting response that dilutes and mitigates the compliment. They see compliments as hot potatoes that need to be tossed on as soon as they land in their hands.

In The Assertiveness Workbook, Randy Paterson lists some of the different ways we reject and deflect compliments, to which we’ve added a few we’ve observed ourselves:

Compliment: “You played crazy good today — you were all over the court.”

The recipient denies the compliment outright.

The recipient of the compliment argues against his deserving the given praise.

Compliment: “That was a really profound insight you brought up in class.”

Response: “Not really. Anyone who had read the previous cases would have come to the same conclusion.”

The receiver downplays the praise by offering self-deprecating remarks.

Response: “Well I need something to draw attention from my ugly mug!”

The receiver questions the giver’s judgment, taste, etc. in offering the compliment.

Compliment: “Your photography is definitely the best exhibit here.”

Response: “Are you kidding? You must not have gone to very many art shows in your life.”

The receiver whittles down a broader compliment into a smaller one.

Response: “This tie can make any suit look good.”

In response to a compliment, the receiver fires one back.

Compliment: “That is one sweet ‘stache!”

Response: “Well that’s a heck of a manly beard you’ve got there!”

The receiver has trouble accepting the compliment and seeks confirmation.

Compliment: “Your speech was incredibly convincing.”

Response: “Do you really think so? I felt like I was floundering out there.”

The recipient suggests that the thing being complimented isn’t as great as the complimenter is suggesting.

Response: “It’s so old. I’ve had it since high school.”

The recipient transfers the praise to others.

Compliment: “I think that was the best dance we’ve ever had.”

Response: “It was really Jill who did all the work and made it happen.”

Why We Deflect Compliments

Paterson gives the following reasons for why people struggle to fully accept a compliment, to which we’ve again added a couple additional reasons that also think bear mentioning:

Fear of being seen as conceited. This is by far the most common reason people deflect a compliment. They worry that by agreeing with someone else’s praise of them, they are essentially praising themselves and thus being smug.

The need to restore “balance.” Since a compliment is a positive act, you may feel a psychological need to balance things out by either negating the praise through deflection, or by quickly returning the compliment.

The desire to avoid “indebtedness.” This is the worry that if someone does something nice for you like offering a compliment, you will then “owe” them something nice in return and will thus be indebted to them in some way.

Having low self-esteem. If someone says something nice about you that you don’t believe about yourself, your immediate reaction will be to deny or disbelieve it. You can’t integrate the complimenter’s positive view of you into your own negative one, so you look for ways to find their assessment faulty, i.e., they missed the mistakes you made or they don’t have good judgment.

Inability to be assertive. Guys who struggle with being assertive often find accepting compliments to be a struggle. They have a hard time taking ownership of their positive qualities and feel like acknowledging praise isn’t something a “nice guy” would do.

Suspicion of motives. You may reject someone’s compliments if you’re suspicious that they’re just trying to flatter you and butter you up for some reason. This suspicion may be legitimate or it may come from an overly cynical worldview and be rooted in trust issues.

Desire to look even better. People will sometimes use false modesty as a way of trying to make themselves look even better. For example, Bob compliments Jake on giving a top-notch presentation, and Jake, who actually spent a few dozen hours preparing it, says, “Oh, it was just something I threw together.” Now Bob is thinking, “Wow, if he just threw that together, imagine what he could do if he spent a lot of time on something!” Alternatively, someone may seek to add modesty to the other qualities they’re being complimented on. So Mike tells Andy, “I really appreciate how thorough you made this report.” To which Andy responds, “It was nothing. Just doing my job.” Andy may want Mike to think, “He’s not only a diligent employee, but so humble to boot!”

Why You Should Graciously and Fully Accept Compliments

Sociolinguists have found that Americans respond to compliments with a deflecting response a whopping two-thirds of the time. While this kind of response may be popular, it’s not very smart or even polite. This is an area where you should definitely try to break the mold of the mainstream. Here’s why:

Denial and deflection insults the giver. When someone offers you a compliment, they’re saying that they’ve observed and assessed a praiseworthy quality in you. When you deflect or deny that praise, you’re basically contradicting them; you’re saying that they don’t have good judgment, discernment, or taste, or that they’re insincere — that they don’t know what they’re talking about. You’re returning their kind words with an insult.

Denial and deflection make the giver feel uncomfortable. When we dismiss a compliment because it makes us uncomfortable, we simply transfer that discomfort to the giver. Not only do you insult them, but as Paterson puts it, rejecting a compliment often makes the giver feel “awkward, uncomfortable, stupid, or frustrated.” Where do they go from there? They’re now stuck with the tiresome task of offering reassurance of their sincerity . . . ”No I really do think so . . .”

Be a man and eat the discomfort yourself instead of tossing it back like a hot potato.

Denial and deflection decrease the likelihood of someone complimenting you again. When you always wave off people’s compliments, eventually they won’t bother to offer them at all anymore.

Denial and deflection diminishes your value. A compliment shows that someone sees value in you. When you dismiss those compliments you’re telling them that either you do not have the qualities they thought you did, or that you’re so insecure you can’t even recognize and/or acknowledge that you do. Either way, it diminishes your value in their eyes. This makes you unattractive to the ladies who like a man to be confident. It also isn’t impressive to your employer. If you’re always telling your boss that so-and-so is really the one who deserves all the credit for the success on a project, why should they give you a raise or even keep you around?

You lose out on the good feeling that comes with a compliment. Getting a nice compliment can make you feel great. But when you deflect and devalue the compliment instead of absorbing it, you also deflect the positive boost it could have given your self-esteem.

Boomerang compliments aren’t usually sincere. You may think that always responding to a compliment with one of your own is polite, but it’s not. A boomerang compliment signals that instead of listening to and absorbing someone’s praise, you were busy formulating your own compliment. And because people know it’s a knee-jerk behavior that’s designed to mitigate your own discomfort, that it’s more about you than it is about them, it doesn’t register as sincere. It’s far better to offer your own compliment at another, appropriate time, so that it comes off as spontaneous and authentic, rather than coerced. There are exceptions to this rule, of course (see below).

How to Accept a Compliment

The first step in quitting the faux modesty of the compliment deflection routine is to realize that fully accepting compliments does not make you conceited. You didn’t come up with the praise yourself, someone else did! You’re just confirming another person’s assessment, and again, it’s more polite to accept and appreciate their judgment rather than to contradict it.

Second, it’s okay to let yourself feel proud of something you did well. A little pride need not involve an inflated sense of your accomplishments or worthy qualities — just an honest assessment of what you did. It’s quite possible to be modest, while still being grateful and gracious.

So what’s the best response to a compliment? Get ready for it . . . “Thank you.” That’s it. There’s never a situation where a simple, unadorned thank you won’t work.

That being said, sometimes it’s more comfortable and quite appropriate to offer a follow-up to your “thank you,” or an amplifier that shows just how much the compliment meant to you.

Appropriate follow-ups to “Thank you”:

If a compliment is particularly heartwarming or special to you, there’s nothing wrong with following up your “thank you” with an amplifier that tells the giver what the compliment means to you, how it makes you feel, or why you value it:

Now go forward and offer many more compliments to others and acknowledge and accept the ones that come your way with class!