In the 1993 film My Life, Michael Keaton stars as Bob Jones, a dad-to-be who learns he has cancer and may not live to see his son’s birth.

Bob doesn’t want his unborn child to grow up not knowing who he is, so he starts making home movies of himself, in which he talks to his son and shows him how to do things like shave and jump start a car.

Bob does live long enough to see his son be born, but soon after, the cancer reaches his brain, his health rapidly declines, and he passes away while his boy is still a baby.

The movie closes with a scene of Bob’s wife and son watching a video of Dad reading Green Eggs and Ham.

My Life is truly one of the saddest films of all time, and is the only movie I’ve ever seen my dad cry at. It’s like Beaches for men. The idea of knowing you’re not going to be around for your children pummels you right in the fatherly feels.

Bob knew he was living on borrowed time, and wanted to pass along his love and knowledge to the son he wouldn’t get to raise himself. It’s a position we hope to God we’ll never find ourselves in.

Yet it’s actually a spot we all do find ourselves in. For we’re all living on borrowed time. None of us know when death might snatch us from the earth.

An emotional insurance policy is made up of letters, emails, videos, or journal entries in which a father shares his love and wisdom with his children. You can give them these missives on a regular basis or save them up to be read at a future date — and not necessarily just upon your death! They can simply be bundled into a gift given to your son or daughter when they become an adult or reach a certain milestone in their life. An emotional insurance policy acts not only as a back-up should you expire before you get to tell your children everything you wish to say, but also as a chance simply to convey those things you might have trouble verbally expressing — things that might otherwise go unsaid while they grow up.

How and Why to Create an Emotional Insurance Policy

A few years ago, when I shared General George S. Patton’s letter to his son, AoM reader Bob Pearce sent me the following email:

“I really enjoyed reading George Patton’s letter to his son. I have been thinking for some time about the way I communicate with my son and with my grandson. My father passed away four years ago and I have nothing that he wrote. He never wrote me a letter nor I him. I would cherish a letter written to me from my late father. I have, for the past year, written a monthly letter to both my son and my grandson. The letters are not about important or historic events. They are about the things I think were important that perhaps we didn’t take the time to really talk about. I hope in future years, they will refer back to the letters when they want to know what I would think or what I would do in a certain situation. I hope they will find something of value in them to help them in their own decisions. I hope they will remember how much I admired, loved, and wanted the best for them.”

When I posted Bob’s email on our short-lived side blog, The Trunk, I got some great responses that show the different forms an emotional insurance policy can take, and offer some inspiration on why you should create your own for your children:

“I started writing letters to my son before he was born. Mostly the way some people write blogs. Just in case something happens to me before we get to talk about he and I and us.” –adamsimon

“I am a father who lives a fair distance from his son who lives with his mother whom I separated from several years ago. I also work on industrial construction projects that keep me on location in remote areas for long periods of time. When he was young I started a journal to write about our time together, my thoughts on things in the moment as well as a bit of a personal view into his old man’s life. Once he is old enough to read I will send him letters as well to read. The journal I hope to fill and give to him when the timing is right in his early adulthood and hope it means as much to him to read as it does to me to write.” –Bobcat

“I think that I’m going to write every year, on my future son’s birthday, several letters to give him at different points in his life (16th bday, 18th, 21st, when I die, when he marries, etc.).” –Matthew W.

“For my son’s first birthday I bought a bottle of Bushmill’s Black [whiskey] and had all of the folks at his party write him notes for his 21st birthday to keep in the container. I took the opportunity to write my son a letter to say all the things I could think of that I would want him to hear or know about being a man and put it in there as well as a sort of insurance policy in case I was ever not there to tell him myself. It was a very difficult and emotional thing to do but I hope that in 20 years when he opens it I’ll be there to witness it and toast to his future.” –Jason H.

“I write my sons a letter weekly. I write them on nice stationery, note cards (I am in the process of getting some custom letterpressed ones from a local print shop), or photos of things that we have done together that I have printed into postcards (this can be done online through most photo processing places). I mail my letters, as my kids love to get ‘real’ mail in the mailbox. It is a surprise for them.

In my notes I always tell them that I love them, that they are growing and learning to be solid men, and that I am proud of them.

I don’t expect they truly appreciate the letters yet, and I don’t care. Some day they will. What matters is that I am mentoring them to be great men, fathers. and husbands.” –Swimmerman

“Looking back I have only one heartfelt letter from my father; to me it is a treasure. Looking forward I understand that I need to offer the same to my sons. Email easily corrupts connections, emotional and otherwise. Best to expose one’s heart, goals, dreams and praise.

A few years ago a seat neighbor on a flight to somewhere confided that he’d spent hours writing to his daughter and that it was the hardest letter he’d ever had to write. So don’t let any of us be in that position of writing from guilt or regret. Let us all write from a position of joy and hope founded on truth. Let’s give all our children, girls and boys, all our best – even if we don’t (or can’t) express it verbally.” –Susan

Email may not be for everyone, but it can be a great choice for some. My brother-in-law saw this Google Chrome ad around the time his son was born, and loved the idea of creating an email address for him, to which to send him notes he’d someday read. (Note that you can’t actually create an email address for a minor, but you can do so by using your birthdate instead of theirs.)

My brother-in-law doesn’t write to the email address quite as much as the video shows — just a few times a year, especially when he’s traveling. He and his wife hope to show their son this treasury of emails and record of his childhood once he reaches his teen years.

In whatever form you do it, creating an emotional insurance policy is a fantastic way to solidify your bond with your kids, and make sure you leave them a legacy of your love. 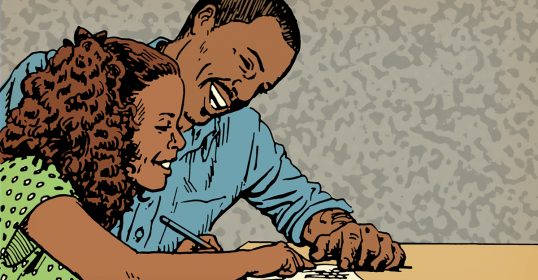 5 Pencil and Paper Games to Do When You’re Bored