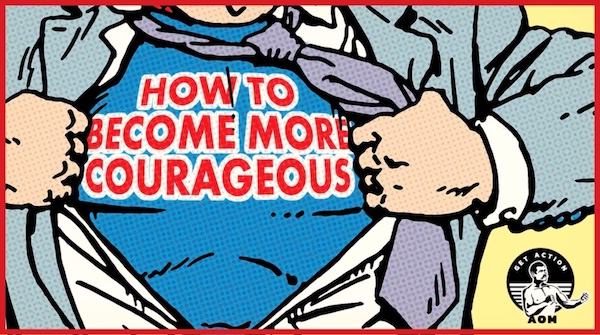 Courage is a universally admired quality. It is has been celebrated in every culture in the world, in every age. It’s one of the four “tactical virtues” of masculinity. And it serves as not only the foundation of masculine excellence, but of every type of it, for as Winston Churchill observed: “Courage is rightly esteemed the first of human qualities . . . because it is the quality which guarantees all others.”

While we often think of courage in terms of physical bravery — risking life and limb to save a child from a burning building — we also call upon this quality in moral and social situations. We need courage to talk to new people, stand up for our beliefs, start a business, change careers, move to a new place, or voice dissent in a church, club, or business meeting. It’s a quality we use in any situation, big or small, in which exists even the tiniest bit of fear and risk, and these come up nearly every day.

Fortunate it is then, that courage isn’t something you’re just born with or not. It’s a quality that can be deliberately developed. As Robert Biswas-Diener puts it in The Courage Quotient, “courage is a habit, it is a practice, and it is a skill that can be learned.”

Today we’ll show you how.

How to Become More Courageous

It’s often been said that courage isn’t the absence of fear, but the ability to feel fear, but act anyway.

Fear itself isn’t a bad thing. It sometimes warns you of legitimate threats and primes you physiologically to be ready and alert for whatever comes next. As Biswas-Diener puts it, “the very experience of fear itself is the tip-off moment, the signal that a possibility for action is opening up and so a choice needs to be made . . . fear is the first step towards courage. It can be the catapult that launches us forward into heroic actions, both large and small.” Fear awakens us to the fact that an opportunity has arrived.

Fear only becomes a problem when it isn’t proportional to the actual risk and/or it hinders you from doing something that is right or will be for your betterment.

While it’s true that courage isn’t the absence of fear, your ability to act in its presence is very much contingent on your ability to suppress and control this emotion. The lower and less paralyzing your fear is, the more able you’ll be to step through it to take action.

The skill of courage thus consists largely in developing your capacity to manage your fear.

Here are some time-tested and research-backed ways to do that:

1. Do reconnaissance to remove aspects of the unknown.

The less we know about something, the more we inflate our risk-assessment of it. Uncertainty breeds fear.

To reduce uncertainty, and thus diminish your nerves, do as much reconnaissance as you can into an event/situation you’ll be walking into. Gather as much information as possible. Do a dry run.

For example, if you’ve got a job interview coming up, drive over to where it will be held the day before, so you know how to get there, how long the drive will take, and where to park. Do some research on the company, and on the interviewer too, if possible. Figure out how current employees dress (watch them leave the office at the end of the day if needed), so you can gauge how to dress yourself.

Or if you’re nervous about a public speaking event you’ve got coming up, visit the classroom or auditorium in which you’ll give the speech beforehand. Stand on the stage to envision what it will be like to give your address.

Things are less scary, the more you know what to expect.

A little fear amps you up. Too much shuts you down. To reduce your fear to manageable levels and keep your physiological response in check, use various relaxation techniques. These can include tensing and relaxing all the parts of your body, “tactical breathing,” and meditation.

You’ve likely heard of the “bystander effect”; the well-documented phenomenon in which people are less likely to render aid or address a wrongdoing when they’re in a crowd, than when they’re by themselves. Research has found that part of the reason for this effect, is that folks figure someone else will step in to help — someone who’s more qualified than they are to do so. People may want to help, but don’t know how. Conversely, and not so surprisingly, research also shows that bystanders who feel competent, are more likely to come to the aid of others.

Given the diversity of scenarios that involve risk and danger, it pays to develop a wide range of skills, from self-defense and first aid, to automative repair and the ability to speak a foreign language. The greater your degree of savoir-faire — the knowledge of what to do in any situation — the braver a man you’ll be.

Though the power of being in a group context is usually thought of in a negative way — people using the anonymity of the crowd to hide or give in to their worst impulses — it also works the other way around too; the presence of friends and family can increase your willingness to act in positive directions.

Loved ones provide accountability; if you tell them you’re doing something, the dread of shame will spur you to keep your word.

The presence of family and friends can also impart a source of comfort and confidence that tamps down fear. This is true if they’re just present with you, and doubly so if they’re willing to participate alongside you. Much courage is gained in the “If you do it, I’ll do it too!” dynamic. There’s less to fear when you’re doing something together, with others who have your back.

Indeed, research shows that the more cohesive the members of a group — the better friends they are — the less likely they are to be inhibited by the bystander effect and the more likely they are to take positive action in a critical, dangerous situation. This is particularly true of an all-male group. Call it the “band of brothers” effect.

You might think that the use of lucky charms or religious totems is irrational, but if they’re scientifically proven to give you more confidence, their use might be thought of as anything but. Research has indeed shown that good luck charms effectively improve performance in both mental and physical tasks. Turns out there’s something to athletes putting on lucky underwear or eating a ritualistic meal before games after all.

To harness the power of magical thinking, wear or carry a special “totem” in situations where you’re feeling nervous. This could be a piece of clothing or jewelry (like Grandpa’s old watch), a souvenir, memento, coin, or photo. Anything that has special meaning for you and makes you feel more calm and confident — anything you believe has even the smallest chance of providing protective powers, giving you good joo-joo, or simply putting some pep in your step. Even if you’re not much of a superstitious thinker, it may still provide an extra sense of comfort and resolve.

6. Think of yourself less.

The more you shift your focus outward, the more courageous you’ll feel.

Focus on other people’s feelings instead of your own. Rather than thinking about how you’re coming off to someone new you’re talking to, think about how she’s doing. Is she having a good time? What can you do to put her at ease?

In other situations, focus on a mission or purpose, a sense of service, instead of your own vulnerabilities. Subsume yourself in a cause greater than yourself.

Courage is at its strongest, when you’re courageous for something.

Related to the above point, an effective way to become less self-conscious is to think of the actions you need to take as growing out of the role you’re in, and what that role requires in terms of your responsibilities and obligations to others. This creates a more impersonal mode of operation that can liberate you to greater boldness.

The reaction of first responders, who run towards danger instead of away from it, is facilitated by the fact that they know that that’s their role. In such situations they become less Tom, Dick, or Harry, and more a firefighter, a police officer, a medic; their identity becomes less personal and more about the job they have to do.

A father who feels a little intimidated about standing up to his child’s principal, may feel more emboldened in remembering that he is the patriarch of his family, charged with protecting his children. A guy who often feels shy as a party guest, may actually come out of his shell more as a party host, who has a specific role, and clearly-delineated duties to tend to. A supervisor who believes his job is to look out for his subordinates, can feel empowered to stand up for them against an unfair edict handed down by the higher ups.

In the movie, We Bought a Zoo, Matt Damon’s character tells his son, who’s struggling to share his feelings with a girl he likes, “You know, sometimes all you need is twenty seconds of insane courage. Just literally twenty seconds of just embarrassing bravery. And I promise you, something great will come of it.”

Fear can seem overwhelming if you think you’re going to have to experience it for days or hours. But everyone can face their fear for just 20 seconds. Or even less. Oftentimes, you just have to take one simple action, knock down the first domino, and that sets the whole course of things in motion. The die is cast! You force your own hand; you burn the bridge behind you; you have no choice but to engage with what follows next.

All you need is a single moment of crazy courage to press send on a text apologizing to an old friend, or to dial a number to ask a contact about a job opportunity, or to confess your feelings to a long-standing crush.

And that can literally be all it takes to change the entire contour of your life.

9. Do something scary once a week.

Courage is well thought of as a muscle that needs regular training to be kept strong. You can’t expect never to exercise your bravery, and then somehow be able to call upon it in an emergency. It has to be kept “in shape” through small choices, for you to be able to employ it in the service of big ones.

You can keep your courage strong by challenging yourself to do one small thing each week that requires a bit of fear and risk — anything that makes you a little nervous. This could mean eating at a restaurant that intimidates you (like a very authentic Chinese place where you’re not familiar with the dishes and the employees don’t speak much English), talking to a stranger, negotiating the price of something (even your morning coffee), visiting a house of worship you’ve never been to before, inviting people over for dinner, etc.

See how many consecutive weeks of this “courage challenge” you can string together, and when a truly scary situation gets thrown at you down the road, you’ll find you have the ability to face it with a braver heart. 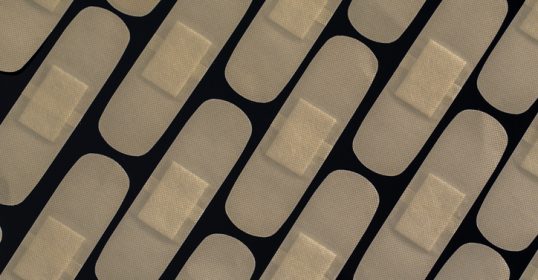