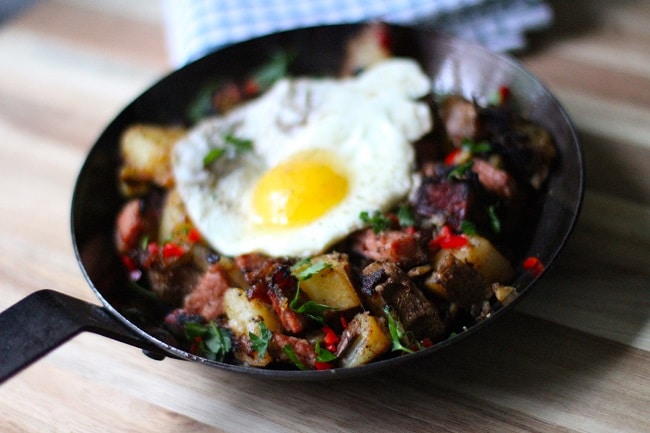 I’ve always proudly been a big breakfast kind of guy. Why stick with a little protein bar or bowl of cereal when you can have steaming, delicious meats, eggs, and veggies?

For me, there’s probably no better breakfast than a properly prepared corned beef hash. I have a feeling I’m not alone in my thinking, as this lovingly simple dish has its enthusiasts around the globe.

As a dish that comes in many varieties, the problem most often encountered when making or ordering it is not its aptitude for transformation, but rather its correct preparation. Trust me, nothing is worse than a mushy version of this classic that’s been made with subpar ingredients. With today being St. Patrick’s Day, I thought it prudent to not only teach proper technique for this dish, but also give you a solid recipe to enjoy tomorrow morning with the leftovers of your corned beef and cabbage supper. 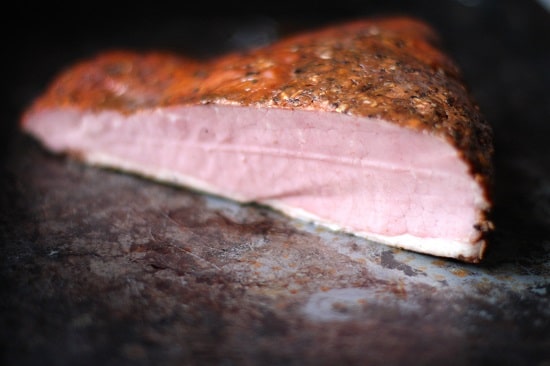 Though it’s too late to cure your own corned beef at home (roughly a 10-day process), you can still pick up a store-bought corned beef brisket and achieve fantastic results. (Unless you are on the front lines of battle or stuck in a storm shelter, never use/eat/consume corned beef that you can find in a can.) I like to slow braise my corned beef for several hours during the morning, allowing it to cool completely in its cooking liquid. When it comes time for supper, I slice the cooled beef (it slices better cold), re-heat the liquid to cook potatoes, carrots, and cabbage, and warm the sliced beef back in the liquid just prior to serving. You could also do this the day before. Trust me, allowing the beef to cool and marinate in its own liquid adds a ton of flavor, and it’s worth the extra step if you want a great corned beef supper.

Remember, your meal will only be as good as your ingredients — which means using great corned beef (or other quality protein) is the first step towards making a great hash.

Beyond just St. Patrick’s Day, the protein part of a hash can take many forms. Seasoned ground turkey (made famous by the now closed Charlie’s Sandwich Shoppe in Boston), or even pulled pork as we do down here in the South make for an excellent dish. Prior to writing this article, I had just been visiting one of my favorite cities in the world, Montreal, Quebec, which is known for their smoked meat brisket — yet another fine meat that has served as a delicious base for my morning hash.

Though some versions of this dish serve the potato component individually, I’m a strong believer that potatoes are part of the binding element of this dish. For that reason, I incorporate potatoes as part of the entire portion, rather than serving on the side.

The traditional boiled potato poses its problems to one of the more crucial elements of a great hash, which is having perfectly crispy, crusty potatoes.

Boiled potatoes tend to contain quite a bit more residual water, which means your hash ends up steaming rather than crisping. Though it’s possible to add in more oil or butter to create such a crust, that same addition of extra fats can make the hash overly greasy and mushy. Not good.

Though it’s an extra step (hey, we’re talking ultimate hash making here!), I always like using baked (and cooled) potatoes in my hash. Not only is their residual water content lower (making for a great crispy crunch), but they also hold their shape much better than the boiled variety. Russet potatoes are my go-to variety.

Most common additions to hash include onion, garlic, and bell peppers. This is where you can get creative and resourceful — chunking in whatever other root vegetables or herbs you have lying around adds a unique component to your hash. You’ll see I’ve kept my recipe fairly traditional, but never be afraid to step out of the box.

It’s breakfast, so I add eggs, preferably fried or poached to medium to allow the velvety yolk to sink in and do it’s magic. Other folks abhor such an addition; relax, its your hash, so make it like you want it, eggs or no eggs.

Okay, let’s put it all together. 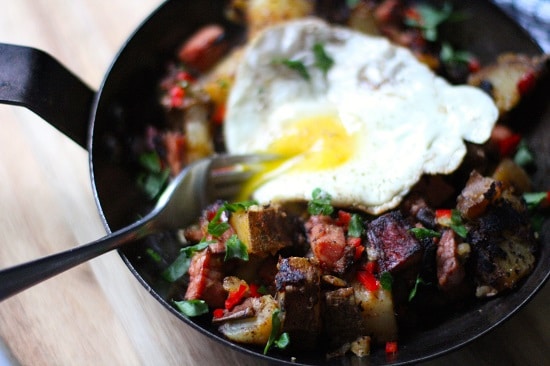