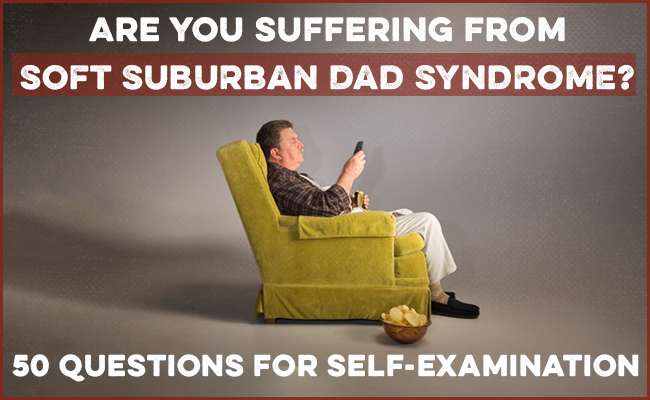 With our archives now 3,500+ articles deep, we’ve decided to republish a classic piece each Sunday to help our newer readers discover some of the best, evergreen gems from the past. This article was originally published in August 2021.

Years ago, I found myself at Kate’s ten-year high school reunion. As I surveyed the room of her former classmates, I noticed a dichotomy in the trajectories that the males and females had taken. By and large, the women had kept themselves up; they still seemed vibrant, engaged, and in shape, even if they had had a few kids by that time. The years had not been as kind to the majority of dudes, however. Many were already overweight, out-of-shape, and looking pretty schlubby and dead behind the eyes.

It was then that a moniker for the condition that seemed to be besetting these men came to my mind: Soft Suburban Dad Syndrome.

In the years since, I’ve noticed SSDS manifest itself in plenty of my peers, and from time to time, unfortunately, in myself as well. Soft Suburban Dad Syndrome develops in the decades after a man graduates from college, gets married, has kids, establishes his career, and, whether or not he literally settles down in the suburbs, moves further and further into the outskirts of a dynamic and adventurous life. With the passage of time, and the eroding of youth, the masses of men fairly give up on life and lose their edge.

Marriage, family, white collar work, suburbia, and adulthood in general don’t invariably lead to a degradation in virility, vitality, and manliness. But unless an intentional, active effort is made to cultivate a countervailing force, such responsibilities and routines tend to lead to a busyness, inertia, stagnation, and malaise that can enervate one’s interests, mollify one’s penchant for challenge and growth, and extinguish the fire in the belly.

The components of that countervailing force have been thoroughly explained in AoM’s most classic and epic article: Semper Virilis: A Roadmap to Manhood in the 21st Century. But a helpful first step to following that roadmap is diagnosing whether you’re suffering from Soft Suburban Dad Syndrome yourself, and which symptoms you most need to address. So below we offer 50 questions for self-examination, organized into the different areas of life where SSDS can crop up. Read; reflect; figure out where you want to push back on the domesticating defaults many guys sink into as they transition from young buck to mature man; and decide how you might change in order to maintain your strength — physical, mental, and social — into old age.

Literal softness constitutes the very tangible epicenter of Soft Suburban Dad Syndrome. As the post-college years go by, men often become more and more sedentary. Testosterone, muscle, and energy go down, while body fat goes up. This can turn into a negative cycle, where the more obese you become, the less you want to move, and the less you move, the more weight you gain.

Maintaining your physical prowess is more than a matter of health; strength and toughness (two qualities which are both vital, and not identical) affects every other aspect of your life as well, from your confidence and how you show up at work and in relationships, to what activities and interests you’re capable of pursuing, to the maintenance of your psychological well-being. As such, getting and staying in good physical condition represents the very foundation of fighting SSDS and leading a vital, fulfilling life.

1. Do you do at least 60 minutes of physical activity every day?

2. Have you gotten your testosterone tested — and is it at a healthy level?

6. Can you do at least five pull-ups?

7. Can you pick up your body weight and carry it for distance?

8. Can you standing long jump your own height?

9. Can you bench press your bodyweight?

11. Can you get off the ground without using your hands?

13. When was the last time you pushed yourself so hard you couldn’t help but put your hands on your knees?

14. When was the last time you did a flat-out sprint?

15. When was the last time you crawled on the ground?

16. When was the last time you jumped up to something? Down from something?

17. When was the last time you climbed something other than a ladder?

18. When was the last time you did an explosive movement — kettlebell swing, plyometrics, etc?

19. When was the last time you felt you couldn’t do one more repetition of a weightlifting exercise, but dug deep and ground out another rep anyway?

20. Do you spend at least an hour of time outside each day, or do you spend more time inside than the average prison inmate?

21. When was the last time you did a workout outside a climate-controlled building?

22. When was the last time you swam in a natural body of water?

23. How many miles did you walk over non-man-made surfaces last week?

24. How many miles do you think you could walk in a day — could you make it fifty?

25. When was the last time you did something that truly made you physically uncomfortable?

The ironic thing about Soft Suburban Dad Syndrome, is that things soften up . . . because they harden up. With age, a sort of slow, progressive process of petrification takes place; not only do our physical movements become constricted and calcified, but so does our thinking.

When you were young, you probably had deep discussions with your friends, journaled your reflections, read, studied, pondered — and changed and refined your ideas as a result. Unfortunately, most people feel that once they get their college diploma, their life’s education is done. They stop learning; they start passively accepting ready-made answers from the media; they outsource their thinking to others. Because they reject new mental inputs, their ideas become stagnant and eventually set like cement.

Learning shouldn’t be a one-and-done thing that ends with your formal schooling, but a lifelong pursuit. Keeping your mind sharp means committing to being an ever-curious autodidact, no matter your age.

27. When was the last time you changed your opinion about something?

28. When was the last time you read an entire book?

29. When was the last time you read a work of philosophy?

30. When was the last time you read, and finished, a book you truly found challenging?

31. When was the last time you spent more than five minutes, without distraction, simply thinking about an idea?

32. When was the last time you wrote something, just because you wanted to — a poem, an essay, a journal entry?

33. When was the last time you learned a new skill?

35. Do you engage in any pursuits you can sincerely call “creative”?

In high school and college, it’s easy to have a robust social circle; you’re surrounded by peers all the time, and don’t need to put in much effort to maintain friendships. In many ways, this experience “spoils” men; having never learned to be intentional with relationships while growing up, they struggle in adulthood to make and keep friends.

When work, spouse, and kids fill your life, it takes truly deliberate effort to maintain relationships outside the family unit. Absent this effort, men tend to let friendships fall by the wayside, relying exclusively on their wives for social interaction and emotional support. Such a dynamic is fragile, unsatisfying, and contrary to the male make-up, which evolved to spend ample time in a “gang” of other men.

36. You still count your buddies from high school and college as your best friends — but have you actually kept in regular contact with them?

37. When was the last time you called or texted an old friend just to catch up?

38. Do you have a few close, local friends who you can do things with on a day-to-day basis?

39. If you had a problem, do you have a friend you could call up to talk about it?

40. Are you a part of, or have tried to start, a slightly more formal group of men organized around some activity or interest?

Not all the areas in which a man can fall victim to Soft Suburban Dad Syndrome and in which he’ll want to maintain his edge fall neatly into the above categories. But these questions are equally worth reflection:

41. When was the last time you took a genuine risk, whether social, financial, professional, physical, or otherwise?

42. When was the last time you did something that truly made you nervous?

43. When was the last time you undertook an outing/trip you could legitimately describe as an adventure?

44. Do you have future plans for undertaking something that could legitimately be described as an adventure?

45. How many hours a day are you on some kind of screen?

46. If you made a list of all the tactical, survival, and DIY skills you’re adept at, how long would that list be?

47. Do you seek to live simply and minimally, or have you accumulated a lot of stuff that weighs you down?

48. When was the last time you entered a competition — athletic or otherwise?

49. Do you currently have any goals you’re working towards?

50. Do you have a strong sense of your life’s purpose?

Fighting Soft Suburban Dad Syndrome doesn’t mean trying to approach every stage of life exactly as you did as a young man. A man’s life cycle has distinct seasons, and it’s unwise to ignore the changes in mood, desires, number/extent of responsibilities, and simple physiological realities that each season brings. As you age, you’ll find certain activities more or less rewarding than you once did; you’ll have less to gain and more to lose in taking risks; you’ll understand more about what you actually like to do, want to do, and can do. Nonetheless, achieving real fulfillment across every season is premised on finding new horizons befitting the stage you’re in, not letting change lead to stagnation, and staying physically and mentally sharp, socially connected, and ever engaged in the grand game of life.