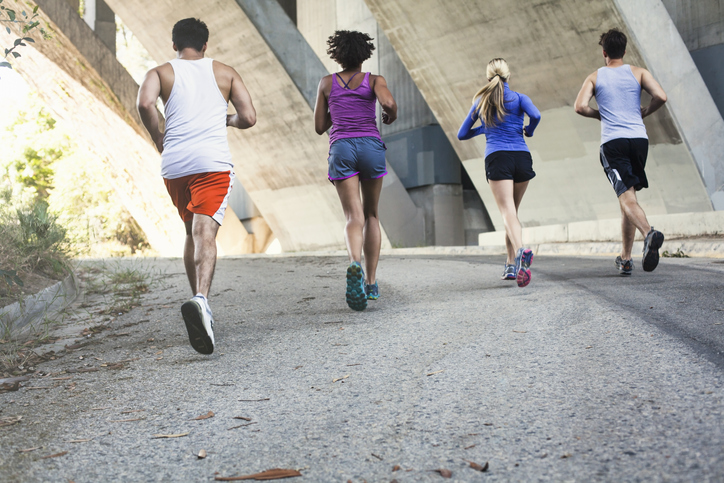 When it comes to the biggest problems in modern Western society, things like obesity, anxiety, depression, and of course, COVID-19, surely rank near the top of the list.

Every year, the United States spends $200 billion on mental health services, another $200 billion on conditions related to obesity, and has thus far spent trillions on the pandemic.

Beyond the staggering economic cost, these issues have added an untold amount of suffering to individual lives, diminishing their quality and shortening their length.

While these maladies are different — some biological and some environmental; some mental and some physical — they could all be prevented, managed, and/or treated with the very same thing: physical activity.

That exercise has health-promoting effects isn’t a novel observation. But the idea that bodily movement is good for us typically hums unnoticed in the background of our world.

Once you take a step back, however, and recognize the way that physical activity runs like a through line in both the causes and cures of almost everything that most plagues us, the realization is downright startling.

Diet is often touted as the most fundamental factor in weight management and is surely where the rubber meets the road in preventing and treating obesity. But very few people are successful in significantly changing their diet . . . at least if they don’t exercise.

It’s true that exercise doesn’t help people lose a ton of weight (though the ~10-15 pound weight loss that’s been shown to be achievable through exercise alone, without any modifications in diet, is nothing to sniff at). But it’s arguably the case that people will never be able to lose weight beyond that range by altering their diet, if they don’t first prioritize regular physical activity. This is because exercise has been shown to regulate appetite, so that people are better able to naturally match their caloric intake to their caloric expenditure. Sedentary people lose this ability, and lose touch with their feelings of hunger and fullness; in fact, sedentary people eat more than active people do, despite their lower caloric needs. If people are ever going to be able to create the small caloric deficit needed to shed pounds, they must first lower their hunger signals to manageable, non-ravenous levels. Exercise gets them there.

The same appetite-regulating effect seems to be behind the fact that regular exercise has been shown to be significantly effective in preventing weight gain in the first place, and to be even more important than diet in preventing the regaining of weight after it’s been lost.

Nearly 10% of Americans suffer from some form of depression each year, and the most common treatments for this condition are therapy and drugs. But studies have shown that exercise is just as effective for treating depression, and involves neither the cost of the former nor the side effects of the latter. Regular exercise has also been shown to lower the risk of becoming depressed in the first place. Exercise releases all kinds of feel-good neurochemicals, and not being obese, and consequently being able to move agilely, go after whatever pursuits you wish, feel comfortable in your skin, and experience a spring in your step does wonders for mood as well.

Just as with depression, physical activity has been shown to not only alleviate anxiety, even if severe, but to prevent anxiety as well. This is likely due to exercise’s aforementioned ability to release feel-good neurochemicals, as well as the way in which it helps people get more comfortable with uncomfortable feelings. Anxious exercisers come to experience an elevation in breathing and heart rate as a catalyst for good outcomes and better health, rather than a distressing cause for panic.

While the pandemic created universal, widespread lockdowns, research “conducted all over the world on cohorts of patients with COVID-19 have shown that the risk of being severely affected by this potentially deadly virus varies considerably. For instance, frail elderly people initially represented a large segment of patients with COVID-19 who died. However, further analyses revealed that people with obesity and other chronic conditions, such as type 2 diabetes mellitus and cardiovascular disease, were at greater risk of severe COVID-19 and death than individuals of a normal weight without comorbidities.”

Research has shown that not only does obesity put someone at much greater risk of severe COVID-19 outcomes, but so does a lack of physical activity. Among those who became infected, the sedentary were more than twice as likely to be hospitalized, 73% more likely to be placed in intensive care, and 2.5 times more likely to die from the disease as compared to those who got at least 150 minutes of exercise a week.

Physical activity as a solution certainly isn’t limited to the problems outlined above.

Exercise can also help alleviate garden-variety stress and boost resilience, prevent and reduce alcohol and drug abuse, and curb behavior problems and boost academic performance in schools. And, given that research has shown that boredom leads to greater political extremism, it may not be a stretch to posit that if more people filled their time with jogging and calisthenics, we wouldn’t have as much polarization in this country. Goodness knows that if you’ve ever had a child come home from school on a rainy day on which they had sit-around indoor recess, you’ll know how squirrely their pent-up energy makes them. Can there be a better description of that which plagues our culture than acute levels of superficial-to-severe squirreliness?

Yes, when you zoom out and survey the scene, it’s downright startling to realize that so much of what we are struggling with individually and societally is rooted in the fact that we have stopped doing what our ancestors did naturally for thousands of years; have stopped doing that which we were born to do; have stopped expanding out and retracted in; have stopped dynamically moving through space and started stagnantly sitting in place; have stopped, period.

It’s not as if greater physical activity on the part of our citizenry would be a cure-all for every single one of our most pressing problems. Cases of obesity existed even in periods where the landscape of life required more movement by necessity; some types of depression prove resistant even to exercise. But an increase in physical activity would truly mitigate a wide variety of ills, and even if their prevalence and severity could only be reduced by half, what a boon to humanity that would be!

Given that physical activity is the closest thing we’ve got to a silver bullet against so many of the inherent difficulties of being human, that it’s a bullet free of both cost and negative side effects, and that in so much of the research mentioned above, the more, and more intensely you exercise, the greater the benefits — you’d think everyone would be banging the drums for it, that it’d be touted by every media outlet and public figure. You’d think more presidents would be like JFK, and make physical fitness a national priority, both in terms of rhetoric and funding, and that they’d celebrate and spur the creation of astonishingly strenuous P.E. programs like this one. You’d think more pastors would admonish their congregants to exercise over the pulpit, and call for a revival of a muscular Christianity. You’d at least think there would be an almost religion-like movement afoot to get everyone up and moving.

You’d think so, but of course, there isn’t.

If we wish to turn around the world’s prospects for the future, that needs to change. Because if we aren’t teaching and preaching the centrality of physical activity from every rooftop and on every street corner, we haven’t yet begun to fight.