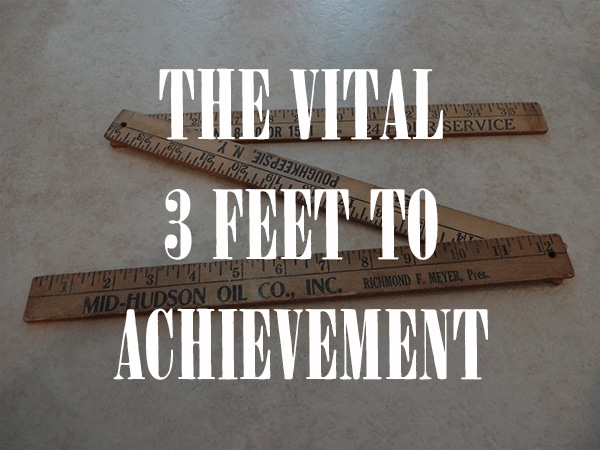 Editor’s note: The following selection on “The Vital Three Feet to Achievement” comes from The Technique of Building Personal Leadership (1944) by Donald A. Laird. It has been condensed from the original chapter.

For many years I have kept a magic rule on my desk.

It has literally been worth more than its weight in gold to me. When I have an impulse to quit, this rule keeps me at work. When I become discouraged, it whispers encouragement. When I stop too long to watch the river, the rule calls me back.

It all started back in the Colorado gold rush. A small-town Marylander was bit by the gold bug. This young man made the long trip to Colorado and started to dig for his fortune.

And he did strike gold—an unusually rich vein. His find was so large that pick-and-shovel digging was inadequate. He needed machinery.

He hurried back to Maryland, breathlessly told friends of his gold strike, of the great opportunity, and of the need for money to install machinery. He took their money back to Colorado, and soon the machines were loosening the richest ore yet discovered.

Then one day the ore suddenly failed. The new machines were bringing out just plain dirt. So the mine was sold to a dealer in secondhand machinery, and the disillusioned prospectors returned to Maryland and their debtors.

The secondhand-machinery man left the machines intact and called in some experts who understood the peculiarities of the mountains. They examined the property and discovered that, centuries before, the crust of the earth had slipped at the very spot where the disappointed easterners halted digging. Dig a little more, the experts said, and you will pick up the vein of ore again.

The new owner started the machinery and dug one foot, two feet, three feet, and, lo! there was the rich ore again. If the original owners had only stuck to it for three more feet!

To remind me of the story of the vital three feet, I bought a three-foot folding rule back in 1920. It has been doing magic for me ever since. Here is how it first worked.

I wrote a paper for one of my courses and thought it was so important that it should be published. But I didn’t have nerve enough to submit it to a good magazine. I mailed it to the sorriest-looking magazine I could locate, and waited. I didn’t have to wait long; it came back by return mail and with an uncomplimentary remark written on it.

Maybe the article wasn’t so good, after all. If that was what a poor editor thought, what would a good one think? I was ready to quit authoring and return to working with the insane. Apparently I got along better with them than with editors.

Then that three-foot folding rule looked at me. It said, “Dig some more!”

I retyped the article and mailed it to another magazine, which seemed to publish almost anything. When it came back promptly, with two strikes on it, I again almost gave up the idea. But I hadn’t counted on that three-foot rule; it made me send it out again and again.

One magazine kept it a long while, and I began buying copies of the magazine each week to see the article when it appeared in print. Then I got a letter returning the manuscript, which had been misplaced.

There was finally only one magazine left on my list. It was the one of which I was most afraid. And I would never have sent the manuscript if that three-foot rule hadn’t said, “Go on, you’ve only dug two feet and ten inches so far.”

It was not returned promptly. Misplaced again, I thought. And when I saw a small envelope from the Yale Review one morning I was sure the manuscript had been lost. I tell you it was hard work to open that blue envelope.

It was from Dean Wilbur Cross himself. He liked the article and wondered if I would consider $35 adequate payment.

I felt like kissing that folding rule, until I figured up how much I had paid for postage and retyping during the two years the article was riding in mail cars. I still figure I lost money on it, but I won the lesson of the three vital feet.

A good many thousand people have heard the story of the magic ruler that keeps people continually achieving. It has given new determination to many.

So often people fail to achieve what they might because they stop only a foot or two short of triumph.

The three-foot rule helps them down the last few hard inches that pay off. It reminds them to keep digging.

Be sure you are wrong before you quit.

Keeping at it gives people a touch of genius. The famous studies of geniuses made by Stanford University show that persistence is their outstanding characteristic—not stubbornness, but doggedly working at it despite rebuffs or bad luck.

[Thomas] Edison had it. He tried 6,000 substances before he found the right one for the filament in his early electric light. He tried 28,000 things to find a substitute for lead in storage batteries. Edison’s own comment was, “Nearly every man who develops an idea works it up to the point where it looks impossible, and then becomes discouraged. That’s the time to become interested!”

Robert E. Peary tried seven times to reach the North Pole and failed each time, but he learned something from each failure. After keeping at it for twenty-three years, he planted the Stars and Stripes on the Pole on his eighth try. Lying helpless on the Arctic wastes, both feet badly ulcerated from frostbite, he wrote, “I will find a way, or make one.” Stick-to-itiveness!

Charles Darwin worked on his studies of evolution for twenty years, though racked with pain much of the time. “It’s doggedness that does it,” he said.

Frank Woolworth’s first four stores were complete failures. But he kept at the idea, changing it slightly as he learned from the failures. Think of that when you stop in one of his stores to buy a folding rule.

A thousand independent automobile makers have failed and been forgotten. Henry Ford was on the brink of failure twice. Once, racked with illness, momentarily discouraged, he nearly quit. But he could find no banker who thought his business was worth buying. That was his good luck, for he stuck by the ship and brought it into port with a cargo richer than any of the bankers’ dreams.

And listen to the self-made man, John Wanamaker: “As I grow older it becomes clear that the difference between men who accomplish things and those who fail is in correct thinking, energy, and invincible determination. A single aim and a strong spirit, undistracted and untiring, seldom fall short of the goal. The man who never quits until the work is done inevitably writes his name on the roll of winners.”

When the digging gets hard, many look for an excuse to quit. That is the very time when the wise person digs all the harder.

When diamonds were first discovered in the rich Kimberley fields, Dutch, English, and native Kaffirs started digging, excitedly but easily. The diamonds were found in an undreamed-of abundance, in softish yellow ground. It was easy digging, with rich rewards. Men were making hundreds of dollars a day, in their little claims thirty-one feet square.

But the soft yellow earth was finally all removed. The diamond diggers came to a layer of blue dirt. Their shovels scarcely scratched this blue earth, it was so hard.

“Well,” they said to each other, “the diamonds must all have been in the yellow ground that was so easy to shovel. The pay dirt must be gone.”

So a young Englishman, who had gone to South Africa to cure his tuberculosis, walked through their tiny claims and bought out the miners who didn’t like to work the tough blue stratum. He got their claims for small sums, and for these small sums he got the richest diamond deposits in all the world, for the real deposits of diamonds were in that blue dirt which was so hard to work.

When that Englishman died at forty-eight, still a young man, he left behind an enormous fortune of more than thirty millions of dollars. Cecil Rhodes dug in when the digging got too hard for others.

When you feel like quitting, let a three-foot rule give you a rap on the knuckles and knuckle down to finish the job!

Leadership is attained by sustained action.