Editor’s note: This is a guest post from David Erik Nelson, author of Snip, Burn, Solder, Shred: Seriously Geeky Stuff to Make with Your Kids.

Although store-bought water rockets were once an almost universal part of childhood (at least in suburban middle America, where I grew up), DIY water rockets are almost unheard of in the United States, despite being common in the United Kingdom. The key to the DIY water rocket is the ubiquitous plastic soda bottle. (Often called PET bottles in the UK, these are basically made of polyester, just like your favorite pantsuit.) A soda bottle can easily withstand 150 pounds of pressure per square inch—significantly more than a car or bike tire, and more than enough to launch it into flight.

The following design dispenses with many of the concerns regarding valves, firing mechanisms, pressurization, and so on, because the unit is impossible to over-pressurize, thus eliminating the risk of a rocket explosion. It’s quick and easy (no more than 5 minutes to construct), practically free, fun to make and launch with your kids (while teaching them some basic principles of physics), and, depending on the quality of your bike pump, can arc a bottle 30 feet at speeds safe enough to shoot at your pals, or send a rocket soaring a hundred feet skyward. 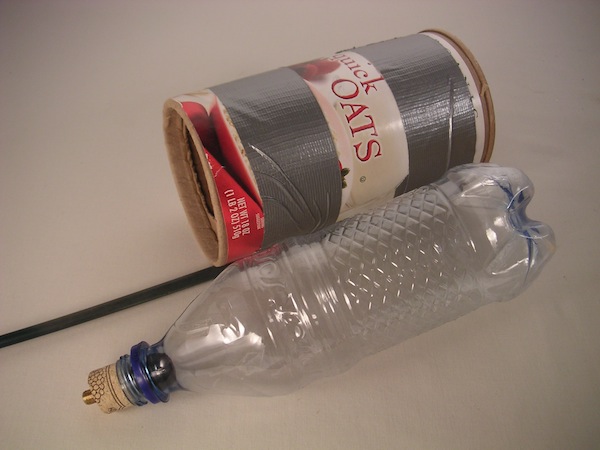 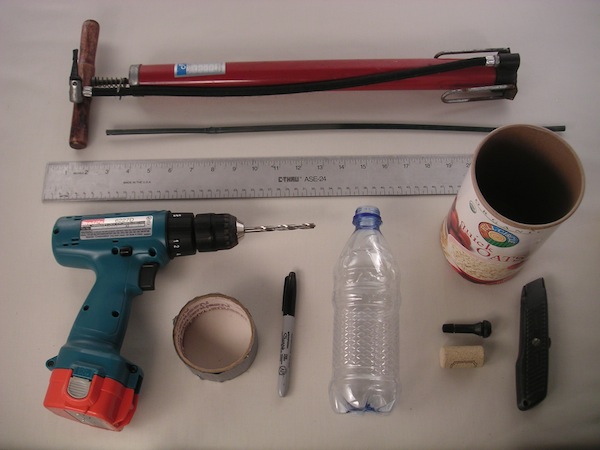 How to Build and Launch Your Water Rocket

Step 1: Start by acquiring a tire stem. Tire stores usually have lots of used stems lying around, since the old stems are discarded when new tires are installed. These shops are very frequently staffed by young fathers who will think building a water rocket sounds awesome, and will be eager to give you as many stems as you need. Make sure to tell them that “broken stems are OK”—a broken stem is one that’s had its bulbous end snapped off (you can see this round end on the top of the stem on the left of Figure 3); broken stems work just fine. Alternately, head to a bike shop, where lots of leaky bike tire inner tubes are probably on hand. A car tire stem is a separate unit from the tire and the perfect dimensions for a soda bottle water rocket, while bike tire stems are integrated with the tube and will need to be cut loose. If you’re using a bike tire stem (shown at the right in Figure 3), cut away all of the surrounding rubber. 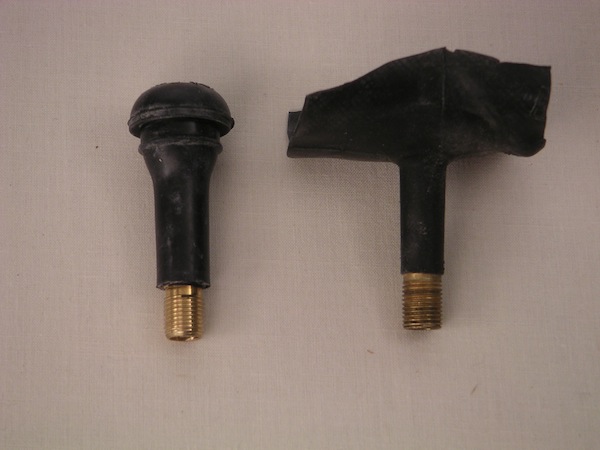 Figure 3: A car tire stem (left) and bike tire stem (right); most of the inner tube has been cut away from the bike stem.

Step 2: To build your launch plug, cut the cork in half, and then drill a hole through the middle to accommodate the tire stem. Cork is a little trickier to work than other woods, since it tends to tear apart. Running the drill fast, start by drilling a 1/4″ hole. If you’re using a bike tire stem (which is a bit narrow), this should be fine (although you’ll likely need to generously ream the hole, or even bump up to the 19/64 bit. For a car tire stem, switch to the 3/8″ bit to expand the hole. In either case, the cork will offer a very snug fit (important for pressurizing the bottle). Test to see which end of your cork fits best into the bottle you have, and measure 1/8″ from that end of the cork. Mark this “safe point” (which I’ll explain later).

Step 3: Insert the threaded end of the tire stem into the “safe point” end of the cork, and push it through. Twisting as you go will help you work it into the cork. All of the brass threads should be pushed entirely through the cork, as shown in Figure 4. (You can use a utility knife to trim down the cork if it ends up being a little too long.) 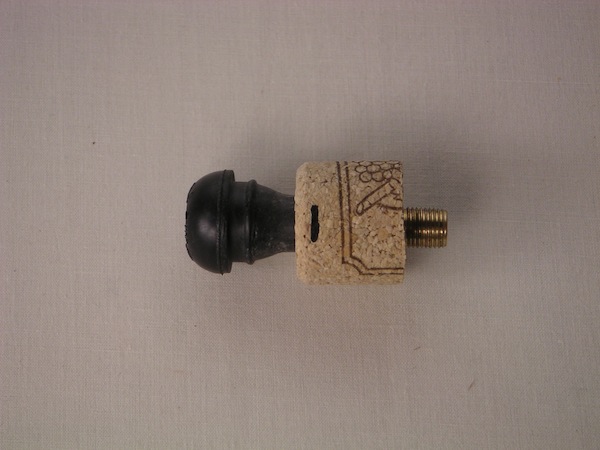 Step 4: Set your launch plug aside and build the launch tube. Cut a 7″ length from the mailing tube, and duct tape the garden stake to its side. (For a more permanent launch tube, consider using a piece of 3″ diameter PVC, and securing the stake with a pair of #44 hose clamps.)

Step 5: You’re ready to launch! Head outside with your bottles, launch tube, launch plug, bike pump, and a jug of water. Stick the launch tube stake in the ground so that the tube is at a roughly 45-degree angle, with enough open room at the bottom for you to attach the bike pump.

Step 6: Fill the bottle 1/3 full with water, and then stick the launch plug in the mouth of the bottle, so that the threaded end of the valve stem sticks out. Insert the plug only as far as the “safe point” you marked in step 2.

Step 7: Slide the rocket into the launch tube, connect the pump to the valve stem (Figure 5), and start pumping vigorously. After a dozen or so pumps (depending on the quality of your pump) the cork will pop and the rocket will go spraying across the yard, clearing at least 20′.

Water rockets launched with the plug inserted to the “safe point” and powered by normal hand-pumped bike pumps are pretty safe and suitable for a mortar-style water rocket duel: combatants work in teams—a gunner and a loader—situated at least 15′ to 20′ apart. Armed with a stockpile of empty bottles and water, the two teams blast away at each other until they grow bored or hungry. It’s more fun than a squirt gun fight, and less dangerous than a bottle rocket fight.

Because the force driving the rocket depends on the pressure of the water spewing out the back, you can improve flight time and distance in two ways: increase the pressure in the bottle or make the water transfer momentum more efficiently.

Start by experimenting with driving the cork farther into the bottle and using different launch angles. A deeper cork requires more pressure to pop, so you can expect longer flights. The limiting factor here is your pump; any old pump will be able to launch a rocket whose plug is inserted only to the “safe point,” but as you drive the cork deeper, you’ll need more pressure.

If you’re using a very cheap bike pump, the back pressure can overwhelm the seals on the pump before the rocket launches. If the water is spraying out of the pump and onto your cuffs, it’s safe to assume you won’t see a lift-off with that setup. If you experience such a launch failure, grab hold of the pump’s valve and the launch plug. Then, without leaning over the launch tube (you don’t want to catch even a low-power water rocket in the face), reach down and grab the end of the bottle, jerking it off the cork. Water will spray everywhere.

Predictably, if a better hand pump gives better launches, then an electric compressor (shown in Figure 6) will be pretty awesome—higher, longer flights; shorter pressurization times; less effort; and more noise. That said, Do not shoot a rocket at your pal if you’re using an air compressor! Someone could lose an eye or a tooth. 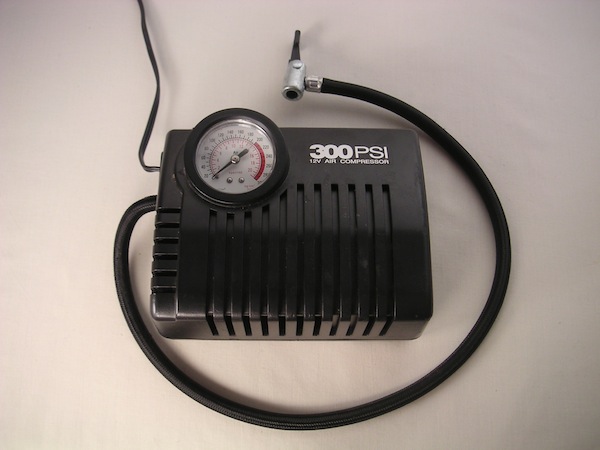 You can also experiment with making the water a more efficient working mass for accelerating your rocket. In terms of volume, this is a case of “less is more;” although having too little water means a disappointing thrust, too much water makes the rocket too heavy to overcome the weight of its own fuel. Denser propellant, on the other hand, will give you greater thrust (because it will transfer more momentum) without increasing the “burn time” (the amount of time it takes to vacate the heavy fuel, which is weighing down your rocket). You can make the water denser by adding dish soap or salt.

Of course, you can also improve the rockets themselves, as shown in Figure 7. The most obvious way is to move up to a larger size soda bottle. Regardless of bottle size, though, if you’re interested in maximizing height, you can add a simple nose cone and stabilizing tail (the nose cone is cut from the top of an identical bottle and glued in place). Keep in mind that adding a tail may necessitate using a screw-on valve stem extension to connect the launch plug to the pump. Auto supply stores sell these extensions for less than $10; they can be handy if you need to check the pressure on a wheel with a fancy rim, or if you want to top off your spare without unbolting it from its storage cubby. 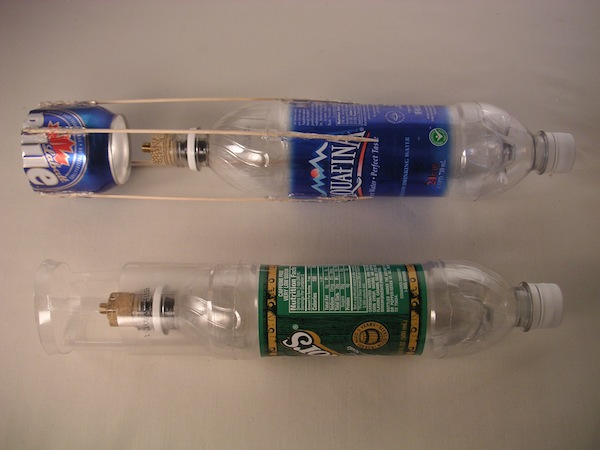 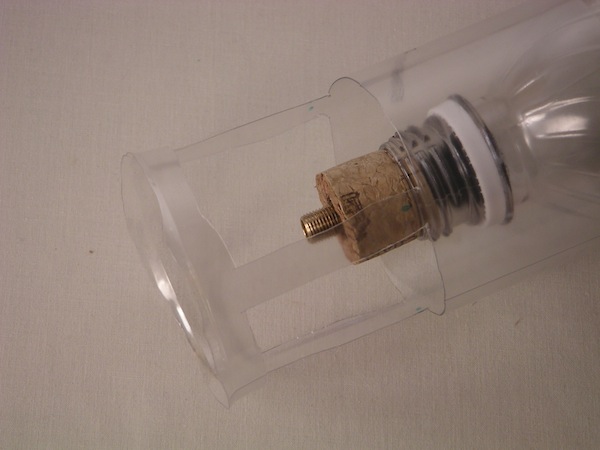 Figure 7: A pair of improved rockets with nose cones and tails (left), and a detail shot showing the cut-aways on the tail of the smaller rocket (right).

About the author: David Erik Nelson is a freelance writer and the author of Snip, Burn, Solder, Shred: Seriously Geeky Stuff to Make with Your Kids. Learn more about the book and download two more free projects at the Snip Burn Solder Blog.