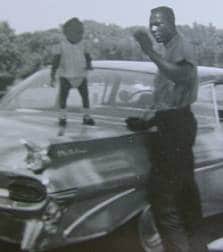 As a parent, there is much to enjoy about that role in your life. There are so many wonderful moments you have with your children over their lifespan that are impossible to properly track and catalogue. Some stand out above the rest-their first words, learning to walk, their first day of school and so on. These moments are to be cherished and to be remembered and make parenting worth every hair pulling second. It’s the reason I’m half bald and going gray; it’s the reason that I worry about their safety and well being every waking second (and some sleeping ones.)

However, there are moments in your child’s life, that while they may be monumentally happy moments, can also be ones that you simply dread. Especially when you are raising a precocious daughter. Boys have their expected moments in life, from bailing them out of trouble at school to getting in fights, but girls are a completely different animal. Yes, I am drawing a line in the sand between the sexes. Anyone who’s raised both boys and girls know they present two uniquely different and hair graying challenges.

No matter how much we dread these following moments that will come up in the lives of our daughters, we must also realize that we will cherish these moments once they have come and especially when they have gone. The memory never fades as it were, and each of these moments will produce a proud and sometimes gleeful memory when thinking back. Until that point, however, there is no reason for any father not to dread the moments up until these events. That’s just being a caring and protective father. Here are three moments in our daughter’s lives that we will undoubtedly dread, and how to cope with them like a man and as a competent, loving father.

The first ten years or so of your daughter’s life are generally complacent ones in that she’s not asking to borrow the car yet and kissing boys is still yucky. These are the golden years for a father, when she’s still learning and curious about the world. You know, before she becomes a teenager. There is a new period now between childhood and the teen years, they call it the ‘tween’ years.

This term is supposed to put parents at ease about their children becoming teenagers earlier than they should. Not much can be done about it. The environment we live in has made sure of that. Unless you live on a farm in the middle of nowhere with no cable television and homeschool your children, it’s hard for them to not be exposed to the so-called adult world. They will receive and process a lot of information in these years, from a whole plethora of outside influences.

Then one day, out of the blue she’ll say she hates you. She’ll slam her door and pout for hours, texting her friends about how horrible you are. She’ll say how she wants to run away and never come back, and cry some more. Then she’ll come out, after she’s now missed the show you said she couldn’t watch, you’ll make up and eat Oreos. This is because teenagers are crazy. Puberty, coupled with a still developing brain, makes teenagers veer between completely adult-like behavior and going stinking nuts. The complications of becoming a woman (not like becoming a man is a walk in the park, but that’s not what we’re talking about here) only add to the already heightened sense of looney.

Suddenly you are working harder than ever to appease this monster that has replaced your little princess. Her moods shift more than a NASCAR driver makes left turns. She says nasty and hurtful things, and picks fights over things that used to be minute details of life. She used to volunteer to do the dishes, now she’d rather spend 40 minutes arguing and screaming something about how it’s personal. God forbid your child gets a sense of politics. Nothing is more stressful and confusing than a teenager mixing political motives into why you’ve asked them to simply take out the trash.

The hardest thing about trying to cope with teenage girl behavior is to not let it get to you. Remember the part about them being out of their minds? Why argue with a crazy person? Rather, let them get it all out and feel the pangs of guilt as you stay stoic and refuse to fuel their passionate fire of misplaced rage and hormones. Handle each situation with calm and logical reasoning; it’ll drive them freaking nuts. They’ll try other tactics, calmer and more thought out tactics in an attempt to prove their dominance. This is what you want, you want them thinking and learning, using their brains for things other than raw emotion.

With a daughter, this will be difficult. You’ll still want to hug them and tell them everything is going to be alright, but you know damn well that isn’t going to happen – at least not on your terms. At the most unexpected times they’ll show you they care and appreciate your efforts. A hug from your daughter for just being there is one of the best things about having a daughter. Soon you’ll both settle into an acceptable truce throughout the teen years, with only a few road-bumps on the way to full blown womanhood.

Road bump number one sneaks right up on you. You know its coming, every father does. That overplayed father-meets-boyfriend joke repeats in your head. You are sitting at the kitchen table; everything is silent besides your daughter’s footsteps pacing upstairs above your head. On the table, the innards of your Winchester Model 101. You hear a car door slam shut outside.

Your daughter comes bounding down the stairs, reaching the front door (which you have a clear line of sight to) before the doorbell finishes ringing. You slowly start to reassemble the gun. As she approaches, you take note of the ear to ear smile on her face. She’s completely ignoring your chosen evening activity. This is part of the truce, you ignore her crazy and she ignores yours.

She’s holding the hand of a young man; you raise your gaze to meet his eyes. You glare. He blinks with fear. You complete the gun and cock it into position. The loud click breaks the awkward silence. His hand drops from hers and takes a cautious step backwards. Holding the gun in your hand, and standing slowly you clear your throat. Your daughter is still smiling, but she’s starting to wonder. She starts to introduce him to you; you interrupt as you slide a round into the chamber. You ever been shot? You ask the boy. He runs. She cries.

None of that actually happens however. Many a night in your easy chair leading up to that inevitable first encounter you fantasize about that scenario. That’s your princess! How dare some teenage lothario trespass into your house with nothing but the most nefarious of intents in mind?

You will shake his hand; you will take him aside and remind him to be courteous and gentleman-like. You will not threaten his life; you will not break his knuckles with your gorilla-like handshake. You will not turn your daughter against you by destroying her first boyfriend’s spirit and/or legs. Because he will not be the last. Chances are there will be many more before she takes her leave of your watchful care. It will never get easier, but every time it will give you an opportunity to be a man and handle each of them with mutual respect. No matter what justification you try to make, you were once that shaggy young man, and you are still standing.

Can I Borrow The Car?

It is statistically shown that teenagers are some of the worst drivers on the road. Remember that bit about their fitfully developing brain? Well, apply that to driving. So what you have are a bunch of crazy people on the road with limited driving experience. Not to mention the current issues with teenagers texting and driving and just plain not paying attention. It’s a scary world for teenager drivers, and I am not looking forward to the day that my daughter comes of age and wants to learn to drive. Yes, I dread that day of all days the most.

No matter how much you teach your child about driving, there is only so much you can learn without actually experiencing it for yourself. We all learned the hard way, by getting out there and doing it and so will our children.

So here’s my solution to the problem: I will enthusiastically teach my daughter to drive without any argument or telling her she’s not old enough. The catch – in a car of my choosing. The trick is to not buy the car before learning to drive, or teaching them in a car full of gadgets and distractions. Yes, they need to learn to drive with such distractions, but they need to learn to drive first. No make-up at stoplights because there is no visor for reflections, no checking the cell phone on the highway because the cigarette lighter doesn’t work and no setting the radio before the seatbelt clicks in because there is no radio. All this might seem extreme, but I just described my car.

Not to mention the lack of air conditioning and the “Oldsmobile Shakes” above 80 miles per hour.

The thing is, these are our daughters. Having children of both sexes I have found that it’s much easier to tell my sons “no” than it is my daughter. I’m sure most of you have the same experience. They make this face, this pouty cute face that is impossible to deny. I don’t foresee that changing. I don’t foresee that it’s going to be easy to deny them the opportunity to learn to drive in a nice car with Bluetooth wireless, radio buttons on the steering wheel and electric windows. You know, a normal car that shouldn’t be rusting in a junkyard. So sadly my conclusion on this one is giving in. At least to the driving machine.

Never forget the lessons though. Even though it’s your daughter and she’s dealing out the pouty face like a blackjack dealer spreads busts across the table, you’ve got to stick to the basics and pull no punches when it comes to the rules of the road. Most important lesson they can learn at that age, one my father taught me, is to always be aware of your surroundings. I have read too many horror stories of teenage girls (and boys) dying in car accidents because they weren’t paying attention to their surroundings. It can’t hurt to print out those horror stories and post them on her bedroom wall either. Nothing like some conscious scare tactic reinforcements.

At this point you may be wondering – is that it? Isn’t there much more than just that in our daughter’s lives? Yes, there is much more. So stay tuned to the Art of Manliness next month for the next three moments. I hope you don’t dread the coming of part two.