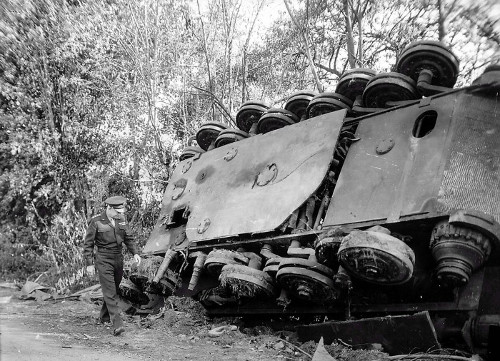 Editor’s note: This is an excerpt from The Obstacle Is the Way by Ryan Holiday.

“A good person dyes events with his own color . . . and turns whatever happens to his own benefit.” – Seneca

One of the most intimidating and shocking developments in modern warfare was the German Blitzkrieg (lightning war). In World War II the Germans wanted to avoid the drawn-out trench fighting of previous wars. So they concentrated mobile divisions into rapid, narrow offensive forces that caught their enemies completely unprepared.

Like the tip of a spear, columns of panzer tanks rushed into Poland, the Netherlands, Belgium, and France with devastating results and little opposition. In most cases, the opposing commanders simply surrendered rather than face what felt like an invincible, indefatigable monster bearing down on them. The Blitzkrieg strategy was designed to exploit the flinch of the enemy—he must collapse at the sight of what appears to be overwhelming force. Its success depends completely on this response. This military strategy works because the set-upon troops see the offensive force as an enormous obstacle bearing down on them.

This is how the Allied opposition regarded the Blitzkrieg for most of the war. They could see only its power, and their own vulnerability to it. In the weeks and months after the successful invasion of Normandy by Allied forces, they faced it again: a set of massive German counteroffensives. How could they stop it? Would it throw them back to the very beaches they just purchased at such high cost?

A great leader answered that question. Striding into the conference room at headquarters in Malta, General Dwight D. Eisenhower made an announcement: He’d have no more of this quivering timidity from his deflated generals. “The present situation is to be regarded as opportunity for us and not disaster,” he commanded. “There will be only cheerful faces at this conference table.”

In the surging counteroffensive, Eisenhower was able to see the tactical solution that had been in front of them the entire time: the Nazi strategy carried its own destruction within itself.

Only then were the Allies able to see the opportunity inside the obstacle rather than simply the obstacle that threatened them. Properly seen, as long as the Allies could bend and not break, this attack would send more than fifty thousand Germans rushing headfirst into a net—or a “meat grinder,” as Patton eloquently put it.

The Battle of the Bulge and before that the Battle of the Falaise Pocket, both of which were feared to be major reversals and the end of the Allies’ momentum, in fact were their greatest triumphs. By allowing a forward wedge of the German army through and then attacking from the sides, the Allies encircled the enemy completely from the rear. The invincible, penetrating thrust of the German Panzers wasn’t just impotent but suicidal—a textbook example of why you never leave your flanks exposed.

More important, it’s a textbook example of the role our own perceptions play in the success or failures of those who oppose us.

It’s one thing to not be overwhelmed by obstacles, or discouraged or upset by them. This is something that few are able to do. But after you have controlled your emotions, and you can see objectively and stand steadily, the next step becomes possible: a mental flip, so you’re looking not at the obstacle but at the opportunity within it.

As Laura Ingalls Wilder put it: “There is good in everything, if only we look for it.”

Yet we are so bad at looking. We close our eyes to the gift. Imagine if you’d been in Eisenhower’s shoes, with an army racing toward you, and you could see only impending defeat. How much longer would the war have gone on? How many more lives lost?

It’s our preconceptions that are the problem. They tell us that things should or need to be a certain way, so when they’re not, we naturally assume that we are at a disadvantage or that we’d be wasting our time to pursue an alternate course. When really, it’s all fair game, and every situation is an opportunity for us to act.

But what if you regarded it as an opportunity instead of a disaster?

If you mean it when you say you’re at the end of your rope and would rather quit, you actually have a unique chance to grow and improve yourself. A unique opportunity to experiment with different solutions, to try different tactics, or to take on new projects to add to your skill set. You can study this bad boss and learn from him—while you fill our your résumé and hit up contacts for a better job elsewhere. You can prepare yourself for that job by trying new styles of communication or standing up for yourself, all with a perfect safety net for yourself: quitting and getting out of there.

With this new attitude and fearlessness, who knows, you might be able to extract concessions and find that you like the job again. One day, the boss will make a mistake, and then you’ll make your move and outmaneuver them. It will feel so much better than the alternative—whining, bad-mouthing, duplicity, spinelessness.

Or take that longtime rival at work (or that rival company), the one who causes endless headaches? Note the fact that they also:

Or that computer glitch that erased all your work? You will now be twice as good at it since you will do it again.

How about that business decision that turned out to be a mistake? Well, you had a hypothesis and it turned out to be wrong. Why should that upset you? It wouldn’t piss off a scientist, it would help him. Maybe don’t bet so much on it next time. And now you’ve learned two things: that your instinct was wrong, and the kind of appetite for risk you really have.

Blessings and burdens are not mutually exclusive. It’s a lot more complicated. Socrates had a mean, nagging wife; he always said that being married to her was good practice for philosophy.

Of course you’d want to avoid something negative if you could. But what if you were able to remember, in the moment, the second act that seems to come with the unfortunate situations we try so hard to avoid?

Sports psychologists recently did a study of elite athletes who were struck with some adversity or serious injury. Initially, each reported feeling isolation, emotional disruption, and doubts about their athletic ability. Yet afterward, each reported gaining a desire to help others, additional perspective, and realization of their own strengths. In other words, every fear and doubt they felt during the injury turned into greater abilities in those exact areas.

It’s a beautiful idea. Psychologists call it adversarial growth and post-traumatic growth. “That which doesn’t kill me makes me stronger” is not a cliché but fact.

Of all the possible strategies for dealings with difficulties, this is the one you can always use. Everything can be flipped, seen with this kind of gaze: a piercing look that ignores the package and sees only the gift.

Or we can fight it the entire way. The result is the same.

The obstacle still exists. One just hurts less. The benefit is still there below the surface. What kind of idiot decides not to take it?

Now the things that other people avoid, or flinch away from, we’re thankful for.

They underestimate us. A huge advantage.

We won’t have to apologize when we make an example out of them.

—critical or question our abilities:

Lower expectations are easier to exceed.

Makes whatever we accomplish seem all the more admirable.

It’s striking: These are perfectly fine starting points, better, in some cases, than whatever you’d have hoped for in the best scenario. What advantage do you derive from someone being polite? Or pulling their punches? Behind the behaviors that provoke an immediate negative reaction is opportunity—some exposed benefit that we can seize mentally and then act upon.

So focus on that—on the poorly wrapped and initially repulsive present you’ve been handed in every seemingly disadvantageous situation. Because beneath the packaging is what we need—often something of real value. A gift of great benefit.

No one is talking glass-half-full-style platitudes here. This must be a complete flip. Seeing through the negative, past its underside, and into its corollary: the positive.