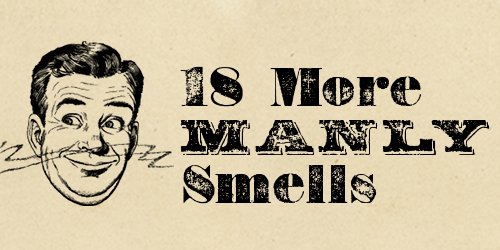 Just about four years ago we published a post on 15 Manly Smells. The article received a ton of comments from folks who wanted to add their own favorite manly smells to the list, and the other day I found myself lost in enjoyment reading over them all again. So many of the additions were so great and evocative and so worthy of mention, and as the first post was one of my all-time favorites, I couldn’t resist compiling another edition. Enjoy and add your still unmentioned favorites to the comments! 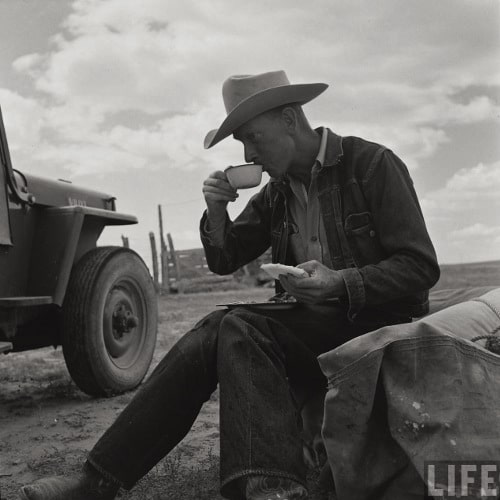 “My favorite scent, not just manly scent, but scent-period: the smell of coffee percolating in one of those enamel coffee pots on a campfire on a cool autumn morning, right next to the river. Inhale the good, exhale the bad. Heal.” -PiperJon

“How about Cowboy Coffee?! Not that BS latte smell of hot milk, but the deep, powerful smell of cowboy coffee made by dumping grounds right into the pot, in deer camp, at 5 am, over a campfire.” -Wilson 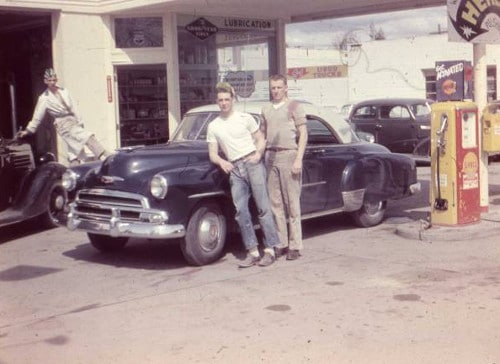 “Every time I’m at a gas station, I can smell my father with his hands covered in engine oil and gasoline from splashing the red canister contents onto the funnel. Those red rags smell more like a man than most men do.” -James

“Gasoline and motor oil, like when you’re pulling a carburetor off a ’68 Plymouth Satellite with a 318cc V-8… mmmm…. and that smell of hydraulic fluid when you bleed the brakes, that’s a great smell.” -PiperJohn

“I drive an old Triumph Bonneville motorbike and I have to ‘tickle’ the carbs before starting it until a little gas comes out. The smell of it on my finger or leather gloves always makes me nostalgic for my dad’s bike on the carport…” -Matt 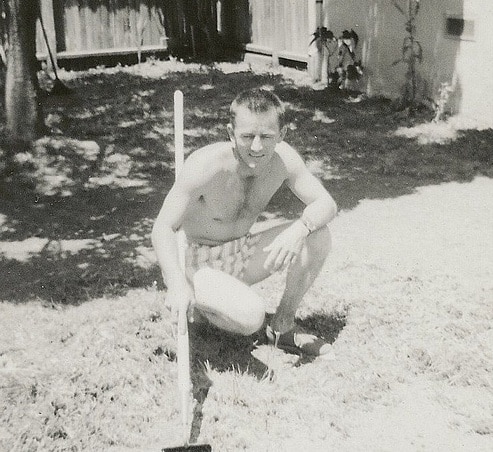 “For me… it’s the smell of freshly turned dirt – that earthy, loamy smell reminds me of the large garden we had in the backyard when I was a youngster. We emigrated from Hong Kong when I was a kid, and my father dreamed of having a farm or acreage in Canada. We never did get that farm, but the privilege of working on his *own* land meant spring and fall, my kid brother and I were outside mucking around in the garden with him as he toiled away. To this day, when I turn the dirt in my own garden, the smell of turned soil reminds me of ‘real’ work and what life is all about, not the antiseptic feel of my office, pushing electrons and paper around in an endless circle.” -Ozone 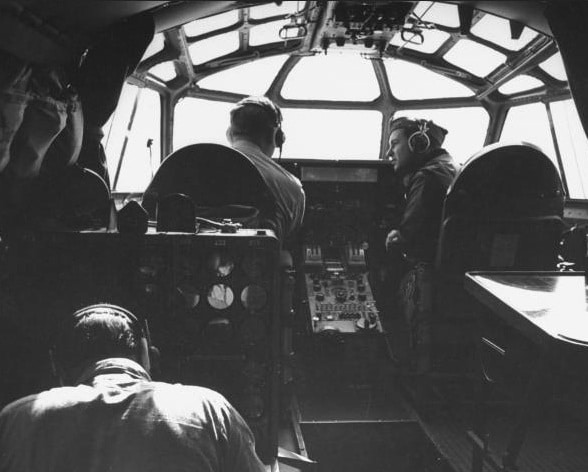 “I can think of two that make me just want to start combing my chest hair. The smell of an old airplane cockpit. I worked B-52s, and the smell of 40 years of sweat, burnt food, tension, and hard work just can’t be beat. I’m sure it’s one of those acquired smells, once you get it, you got it.” -Josh

(For the second thing that makes Josh comb his chest hair, see “old car” below.) 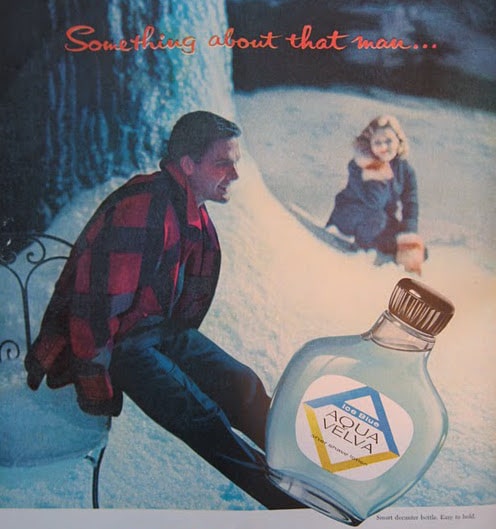 It’s one of the best forgotten drugstore colognes and aftershaves and a smell many commenters felt was truly virile. Said Joe, “Whenever I put some on after shaving, I feel manly and confident!”

Aqua Velva has become a go-to aftershave for me recently. Love how it smells and feels. 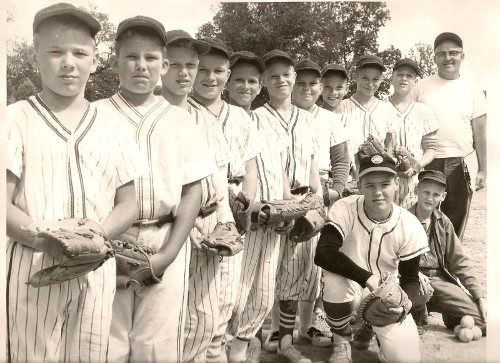 “I remember when I played in Little League there was no smell like putting your glove on your face: leather, dirt, grass, sweat. Baseball is full of great manly smells.” -Sam

The Interior of an Old Car 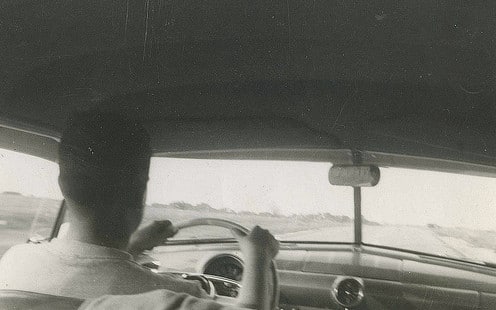 “Nothing beats getting into an old car (that hasn’t been completely restored from the ground up) and taking a big ol’ whiff and just smelling the years.” -Josh 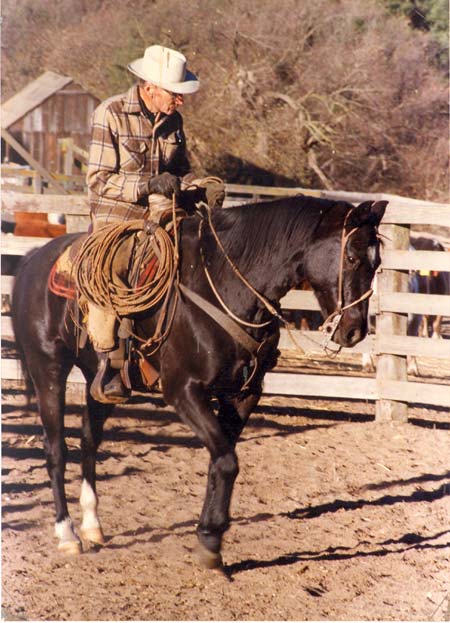 “Anything to do with horses…dried manure, saddle leather, wet saddle blankets, even the smell of hay and sweet feed.” -Kerry 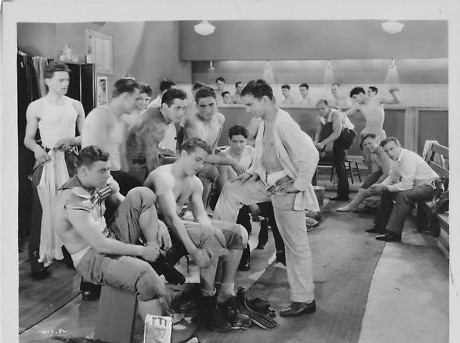 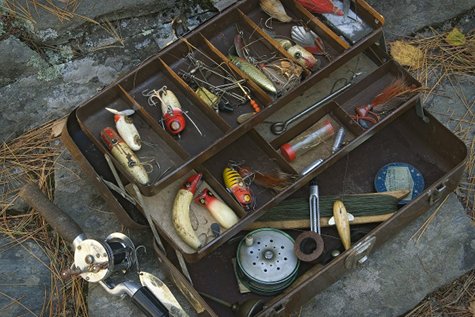 “The smell of the metal on old, worn-out pocket knives mixed with the remains of earthworms on fish hooks just brings me right back to fishing with my grandpa as a young buck.” -Mark 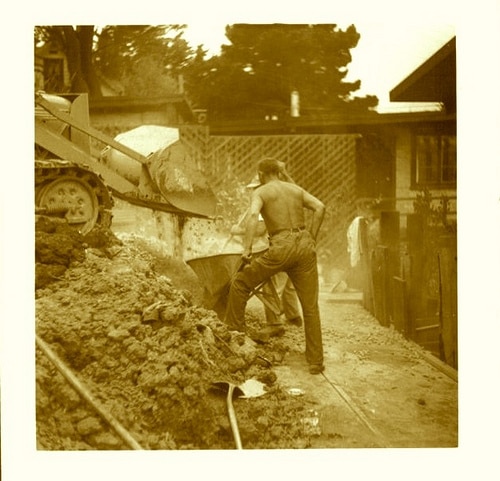 “The smell of a rough framed house, before the exterior doors, windows, and roofing are installed.” -Kerry

“Cutting steel with a torch. Creosote timber. That deep-down earth smell when excavating. Wet concrete. Someone mentioned construction site, but I figured it needed fleshing out!” -Jim 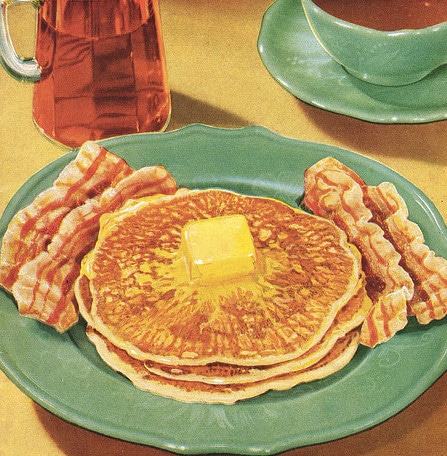 Many people couldn’t believe we left bacon off the original list…we can’t believe it either! One of my fondest memories as a kid was spending Thanksgiving at my grandpa’s ranch in Bosque Farms, NM. Every morning I’d wake up to the smell of pan fried bacon, pancakes, and black coffee. That’s what heaven smells like. 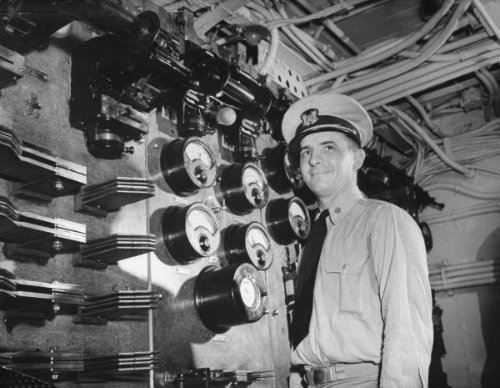 “The smell of warship. Having spent a lot of time at sea when I was in the US Navy, when I visit a warship museum such as USS Midway, the first thing I notice is the smell. Kind of a paint, hydraulic fluid, boiler exhaust, salt air mix.” -Perry

“I’m an old navy guy too and after 35 years I can still remember that smell. Red lead paint, bunker oil, steam, food from the galley, and gunpowder. Add several hundred – or several thousand – tired and often scared people. Put it all in a steel box and seal it up from the sunlight and fresh air. I visited the USS Texas about 15 years ago. She’d been cold iron since the late 1940s but when I went below decks I could still smell the ghost of that smell in the air.” -Dave 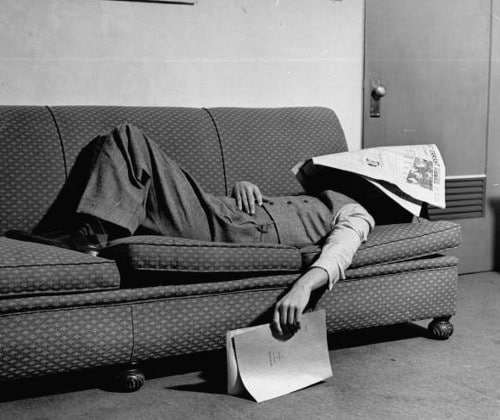 “Another one is the smell of newsprint. My dad would sit on the couch after work (whence by the way, he would come home smelling of machine grease) and read the paper, back in the days when the paper would really leave some color on your hands. I would sit next to him and that newsprint aroma would waft out when he spread the pages wide open. In the winter, he’d light an old kerosene heater just before he settled down to the paper. Talk about being engulfed in manliness.” -Hawkins 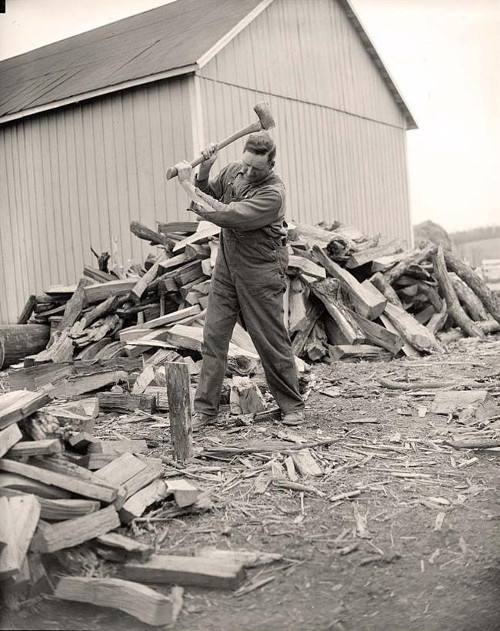 “Hand splitting of firewood. You can’t use an electric or gas powered log splitter and get the same effect. From the metallic smell you get stuck in your nose as you use the double action file to restore the edge on your decades-old axe, to the one-of-a-kind aroma released by a length of red oak as it is cleaved in two, right on down to the combined smell of dank bark chips stuck to your sweaty flannel shirt. Much like the lawn mowing smell, I like to pause to enjoy it.” -Dave 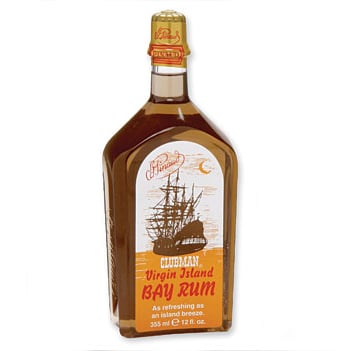 “Bay Rum shaving soap. The kind you have to whip to a lather with a badger hair brush. It is a clean, woodsy, herbal scent (yes it goes nicely with Old Spice) and women LOVE it.” -Dave

“Bay Rum. That’s one of the main ingredients in making a barber shop smell manly!” -Seth

The history of bay rum is as manly as it smells. Several centuries ago, sailors in the Caribbean had the idea to mix bay leaves and rum together to create a cologne that helped cover their stench on long voyages. Islanders took this basic recipe and began adding their own olfactory flourishes by mixing in cloves, citrus rind, and cinnamon. Thus was born an incredibly unique and wonderful fragrance that spread to the rest of the world and became popular among men as an aftershave scent and as a staple at classic barbershops. These days it’s having a resurgence as men rediscover the ritual of wet shaving. 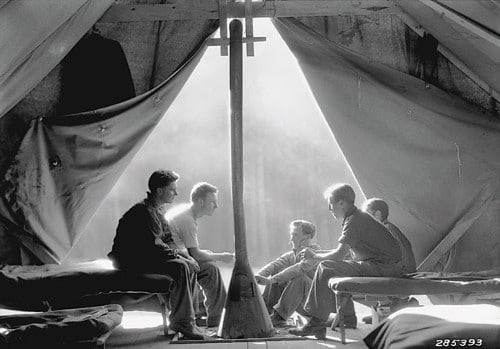 The distinct smell of canvas tents — a mixture of the scent of the fabric and a mildewy musk — was indelible for several commenters, whether associated with camping or life in the Army. This smell reminds me of Boy Scout camp in Colorado. 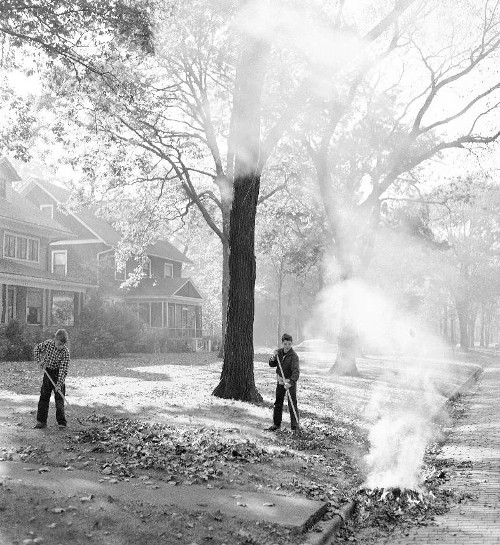 “Here’s a smell that’s hardly ever smelt these days. Probably because it’s illegal, but I loved the smell of burning leaves in the Autumn. It’s a shame kids these day won’t get to experience it.” -Gregg

I’m one of those “kids” who have never experienced the smell of burning leaves in the fall. Most cities in the US had banned it by the time I was born in 1982. My parents have told me about autumn leaf burnings. For about a month, all you could smell in most North American neighborhoods was the smell of burning leaves. I imagine it would have smelled like a campfire, magnified by ten. If you want to experience this smell today, just throw some leaves on your campfire the next time you build one.

There were a couple of comments that listed a myriad of manly smells, and did so in a way that was down right poetic. Enjoy these two evocative odes to manly smells.

“The smell of a long used wood frame, dirt floored garage.
Canvas tents on a warm summer night
Coleman lanterns pushing the darkness back
The differing smells of ammunition being reloaded
A salt marsh, lake, river, pond or stream at dawn
The woods at dusk.
Driftwood burning on the beach
Lava Soap, the bar not that new fangled pump stuff
An old bar, well kept but permeated with the smells of constant patronage
Leather being worked into various items.
The fixative applied to old black and white Polaroid pictures.
An 16 mm movie projector running.
A flash bulb just after it it’s gone off.”

“Loads of great memories here. Add a few more, some subtle like:
fresh maple syrup in the morning when my dad made pancakes (or the smell of ANYTHING cooking for breakfast after a long night camping);
the whiff of scent of a freshly lit Zippo lighter;
the faint ozone and oil of slot car racing or model railroad engines;
that sweet airplane glue or the clear dope you painted on tissue paper covered balsa airplane wings;
and Cox model airplane fuel burning in a micro two-stroke spittin’ and barking in your hands.
The sulphur of model rocket engines when they launch;
the fresh pigskin smell of a brand new football.
The grassy plastic smell of “Jarts” on a summer afternoon before do-gooders made them illegal.
And a few not so subtle:
August-hot creosote on the fresh telephone poles my dad would climb when he was a lineman;
the smell of engine, black grease, dust and the acres and acres of crop you were working under your grampa’s tractor when he trusted you to do the field when you were just 11 years old;
black powder smoke from the shooter’s point of view on a firing line of muskets in a Civil War reenactment;
ether engine starter spray;
waterproofing on G.I. tent halves;
mothproofing stuff on canvas webgear and new uniforms;
LSA cleaning solvent for your M-16 or M-60 (and the sulfur, burning grass, and white-hot metal smell whenever you had to change barrels);
deuce-and-a-half diesel exhaust; the smell of the inside of your combat helmet (the steel pot kind);
jet exhaust, dust and just a hint of somebody else’s barf as you exit the tail of a C-130 over a blistering hot tarmac – weird as it might sound, still striking good manly memory smells.”